How Gaza's Past Reflects Gaza's Present 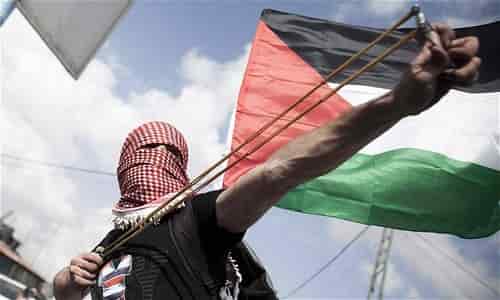 By Dany Shoham/Algemeiner.com June 24, 2019
Share this article:
The first Philistines (not to be confused with present-day Palestinians) were invaders originating from Kaphtor (Cyprus or Crete), who arrived on the Gaza coast -- close to Grar Stream. They were aggressive and determined. After establishing a foothold in the territory, they gradually moved northward to Sorek Stream and beyond.
Biblical Philistia contained the "Five Lords of the Philistines" (from south to north): Gaza, Ashkelon, Gath (between Kiryat Gat and Beit Shemesh of today), Ashdod, and Ekron (near today's Kiryat Ekron).
During the most recent round of fighting between Israel and Hamas in Gaza (May 2019), Hamas frequently targeted Ashkelon, Kiryat Gat, Beit Shemesh, Ashdod, and Kityat Ekron. Their aim, as ever, was to kill Jewish civilians, though this time their further purpose was to condense their barrages in an effort to overwhelm the Iron Dome defense system.

This was not the first time that Hamas, which has ruled Gaza since 2007, has targeted Gush Dan over the past decade.
There is a powerful historical echo to these clashes. The Biblical tribe of Dan, who were of course Israelites, dwelt for years directly in front of Northern Philistia, domain to domain, head to head. The Philistines of the time monopolized the iron industry and managed to prohibit the production of common weapons by the Israelites, compelling the Judges who fought them -- Shamgar ben Anath and Samson -- to employ unusual means. Shamgar ben Anath temporarily saved the Israelites by killing 600 Philistines with an ox goad, for example.
While the tribal origin of Shamgar ben Anath is unknown, Samson -- who embodied supreme physical might and spiritual boldness -- was from the tribe of Dan. The treatise of Samson's confrontations with the Philistines is among the most impressive in the Bible, and underscores his creative tactical and strategic thinking.
Samson "smote [the Philistines] hip on thigh"; he "caught 300 foxes, attached flaming torches to their tails, let them loose within the Philistines' fields, and thus burned all their harvest"; and he "found a donkey jawbone, with which he hit 1,000 Philistines." The Gazans eventually succeeded, with the help of Delilah, in exhausting Samson and forcing his surrender, but he collapsed the temple of Dagon in Gaza on top of them all, killing himself and thousands of Philistines along with him.
This was by no means the end of the Israelites' trouble with the Philistines. They expanded outward from Philistia, arriving at Shiloh in the domain of the tribe of Efraim, and placed garrison forces at Mikhmash and Geva in the domain of the tribe of Benjamin.
The first king of the Israelites, Saul, who was affiliated with the tribe of Benjamin, rebelled against the Philistines. In the process, he became the first to establish an orderly army for the Israeli people, headed by Avner ben Ner. Saul struck the Philistines in Mikhmash, and his son Jonathan hit them in Geva. Saul hit Ammon, Moav, Tsova, and Amalek as well, but was eventually defeated by the Philistines.
Prior to his becoming king, David volunteered to face Goliath the Philistine, a formidable giant who was terrorizing the Israelites. By means of an incredibly simple weapon, his shepherd's slingshot, David delivered a stone directly at the forehead of Goliath -- his only exposed part -- and killed him. The horrified Philistines fled, and the Israeli army plundered their camps.

When David was a king in Hebron, the Philistines dominated appreciable territories outside of Philistia. When he came to rule his kingdom in Jerusalem, however, he made a point of pushing the Philistines back into Philistia. But while David's kingdom extended up to Sidon and included a considerable portion of what was eventually to be called Transjordan, it did not encompass any of Philistia itself. The five Lords of the Philistines remained intact.
That state of affairs continued until 770 BC, when King Uzziah of Judea captured Gath and Ashdod, came to Yavne, and built settlements and strongholds along the sea coast. He did not capture Ashkelon or Gaza (and apparently did not try to). This conquest endowed Uzziah with the ability to monitor transactions not only at the seaports, but also along part of the Philistia pathway between Egypt and Israel.
Thanks to this advantage, plus the dominance he attained in Kadesh and Eilat, Uzziah gained control over the route on which goods moved between the Eilat Bay head and Philistia. He was also able to monitor routes connecting Philistia with the Arab Peninsula countries and to control land trade routes from Egypt northward, to Philistia and beyond.
Jonathan the Hasmonean conquered Gaza in 145 BC, but did so as a governor nominated by the Seleucid Empire, not as an independent entity. In 101 BC, Alexander Jannaeus conquered Gaza -- following a year of blockade -- after taking Anthedon (between Gaza and Ashkelon), Rafah, and Rhinokoroura (now el-Arish).
Four years later, Alexander Jannaeus was ordered to destroy Gaza -- a port city and an important international trading crossroads -- rather than use it. The object was to choke off Gazan trading by isolating it from the sea and thereby strengthen the trading power of Judea.
In doing this, he avoided harming nearby Ashkelon in deference to the alliance between that city and the Ptolemaic dynasty, which helped Judea maintain good relations with Egypt and Cleopatra the Third.
After the suppression of the Bar Kokhba Revolt in 135 CE -- and despite the fact that the territories of Philistia were not included within the rebellion areas -- the Romans changed the name of the province of Judea to Syria-Palestina, from which the modern-day name "Palestine" originated.
Toward the end of the Hasmonean era, a Jewish community was initiated in Gaza that experienced ups and downs until its final destruction, during the 1929 pogroms. During the Talmudic era, there was a Hebrew village in the heart of the Gaza Strip, between Gaza and Khan-Younes.
In this village dwelt the Tanna Rabbi Eliezer Ben Yitzhak of Kfar Darom. Many years later, a renewed Kfar Darom, together with Gush Katif, housed a considerable Jewish population in the Gaza Strip, where they were met with increasing Arab terrorism.
The foreign rulers who occupied the land of Israel, from the Assyrians to the British, were also exposed to the challenges of Gaza. During the Christianizing of the Empire of Byzantium, for example, Gaza adamantly resisted pressure to give up its culture and pagan religion.
Only by force did the central government in Byzantium succeed in imposing Christianity as the predominant religion in Gaza. The troops of the British Empire too had a long and difficult fight with the locals on their hands before they managed to take Gaza from the Ottomans in 1917.

During the Israeli War of Independence (1948), the Egyptian army succeeded in advancing along the coastal plain up to Ashdod, but was halted at the Ad-Halom Bridge. Operation Yoav, which included a combination of offensive ground, aerial, and marine activity, pushed the Egyptian army into a southward retreat, bringing Israeli dominance to Ashdod and Ashkelon in October 1948. The Gaza Strip remained in Egyptian hands.
After the war, Egypt occupied the Gaza Strip but did not regard it as Egyptian territory, choosing instead to establish a military administration there.
In 1967 (and, indeed, in 1956 as well), the IDF conquered the Gaza Strip from Egypt -- but at the southern entrances of Gaza a severe battle took place between the city's defenders, affiliated with the "Palestinian" 20th division of the Egyptian army, and the IDF.
On the morning of June 6, after the Israeli Air Force bombed targets in Gaza, Israeli troops attacked from the east. In parallel, after facing fierce resistance in the Khan-Younes area, another Israeli force maneuvered northward. By noon, the conquest of Gaza was completed.
Gaza City was used as the chief command station of the IDF troops occupying the Strip from 1967 through 1994. With the exception of 1970-71, when the PLO managed to stir up a terrorist wave that was swiftly suppressed by the Israeli security forces, the Strip was relatively calm until December 1987, when the intifada broke out with the city as one of its foci.
During the intifada, which lasted until the signing of the Oslo Accords in the autumn of 1993, Gaza's economic situation deteriorated due to limitations imposed on Gazans' movement into Israel.
In 1994, as part of the Oslo Accords, Israel ended its control of the Palestinian population of Gaza, which came under the rule of the newly established PLO-dominated Palestinian Authority (PA). PLO Chairman and PA President Yasser Arafat set up headquarters in Gaza, and the first session of the Palestinian National Council (the PLO's semi-parliament) in PA-held territory took place there in March 1996.
In the summer of 2005, Israel completed its disengagement from Gaza by unilaterally removing the 8,000 residents of the dozen Israeli villages that had existed in the southern tip of the Strip for decades, prompting a painful dispute inside Israel.
In 2007, Hamas, which had won the first-ever parliamentary Palestinian elections the previous year, forcibly seized control of the Strip from the PLO/PA. In response, Israel declared the Strip a "hostile entity."
In the 12 years that have passed since 2007, many changes have taken place in the Gaza Strip of varying degrees of significance -- but the ancient core embodying Gaza, the last of the Five Lords of the Philistines, remains in place.
While the Strip's current inhabitants are not descended from ancient non-Arab Philistines, they bring Gaza's ancient past -- and its intractable resistance to peaceable co-existence with the Jewish state -- into the present.
Originally published at Algemeiner.com - reposted with permission.