The Suicide Of France 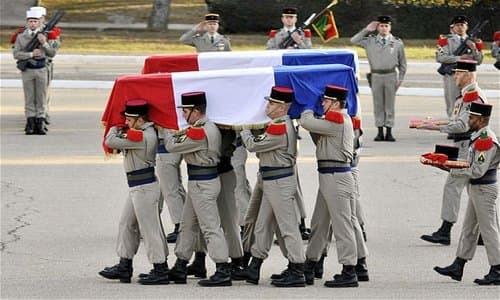 By Giulio Meotti/Gatestone Institute June 27, 2019
Share this article:
"Regarding France in 2019, it can no longer be denied that a momentous and hazardous transformation, a 'Great Switch', is in the making", observed the founder and president of the Jean-Jacques Rousseau Institute, Michel Gurfinkiel.
He was mourning "the passing of France as a distinct country, or at least as the Western, Judeo-Christian nation it had hitherto been presumed to be". A recent cover story in the weekly Le Point called it "the great upheaval".
Switch or upheaval, the days of France as we knew it are numbered: the society has lost its cultural center of gravity: the old way of life is fading and close to "extinction". "Frenchness" is disappearing and being replaced by a kind balkanization of enclaves not communicating with one another. For the country most affected by Islamic fundamentalism and terrorism, this is not a good recipe.

The French switch is also becoming geographical. France now appears split between "ghettos for the rich" and "ghettos for the poor", according to an analysis of the electoral map by France's largest newspaper, Le Monde. "In the poorest sector, 6 out of 10 newly settled households have a person born abroad", notes Le Monde.
A kind of abyss now separates peripheral France -- small towns, suburbs and rural areas - from the globalized metropolis of the "bourgeois Bohemians", or "bobos". The more the French élites with their disposable incomes and cultural leisure cloister themselves in their enclaves, the less likely it is that they will understand the everyday impact of failed mass immigration and multiculturalism.
A recent European poll reflected these "two Frances that do not cross or speak to each other", observed Sylvain Crepon of the University of Tours, in analyzing the success of Marine Le Pen's National Rally party in the recent European Parliament election.
Le Pen and President Emmanuel Macron, the two winners in the election, speak to completely different sociological groups. In the Paris suburbs -- Aulnay-sous-Bois, Sevran, Villepinte and Seine-Saint-Denis -- the far-right National Rally has been experiencing a boom. In the cities, Le Pen is largely behind: she came fifth in Paris, third in Lille, fourth in Lyon. According to Crepon:
"[T]hese cities will be protected from the National Rally's vote by their sociological structuring. It gives credit to the populist talk that diagnoses a disconnected elite. This [view] backs the idea of ​​a sociological break, which is not completely wrong".
On one side of this break are towns such as Dreux, which Valeurs Actuelles called "the city that prefigures the France of tomorrow":
"On one side, a royal city with the vestige of a history believing that all things are being changed [millenarian]; on the other, cities imbued with [drug] trafficking and Islam. The bourgeois of the city center vote for Macron, the 'small whites' for Le Pen".

On the other side, is Paris. "All the metropolises of the world know the same fate. This is where wealth flows and where the alliance between the 'winners of globalization' and their 'servants', immigrants who have come to serve the new masters of the world, keep their children, bring their pizzas or work in their restaurants", writes the distinguished social commentator Èric Zemmour in Le Figaro. From now on, he writes, "Paris is a global city, not really a French city".
The globalized, "bobo-ized [bourgeois Bohemian] upper classes", according to one of France's most respected authors. Christophe Guilluy, are filling the "new citadels" -- as in Medieval France -- and are voting en masse for Macron. They have developed "a single way of talking and thinking... that allows the dominant classes to substitute for the reality of a nation subject to severe stress and strain the fable of a kind and welcoming society". Guilluy has been criticized by some French media for addressing this reality.
The recent "yellow vests" movement -- whose demonstrators have been protesting every Saturday in Paris, for months, against President Macron's reforms -- is a symbol of this division between the working class and the gentrified progressives.
According to Guilluy, it is a "social and cultural shock". This shock, according to the French philosopher Alain Finkielkraut, consists of the "ugliness of peripheral France and its effects on concrete lives, the sadness of these working classes who have lost not only a standard of living but also a cultural referent". In France, there is now a pervasive sense of "dispossession".
Marine Le Pen's party won more than twice as many electoral department as Macron. Le Pen won in the depressed and deindustrialized areas of northern, south-central and eastern France that spawned the yellow vests.
"Since moving to France in 2002, I've watched the country complete a cultural revolution", Simon Kuper recently wrote in the Financial Times.
"Catholicism has almost died out (only 6 per cent of French people now habitually attend mass), though not as thoroughly as its longtime rival 'church', communism. The non-white population has kept growing".
Macron, Kuper explains, is the symbol of "a new individualised, globalised, irreligious society".

France's flight from Catholicism is so evident that a new book, L'archipel français: Naissance d'une nation multiple et divisée, by the pollster Jerôme Fourquet, has described the cultural failing of the French society as a "post-Christian era": French society's displacement from its Catholic matrix has become almost total.
The country, Fourquet states, is now implementing its own de-Christianization. And there is only one strong substitute at the horizon. There are today already, according to a new academic study, as many Muslims as Catholics among 18-29 year-olds in France; and Muslims represent 13% of the population of France's large cities, more than double the national average.
Sometimes Muslim feelings of community solidarity appear to have been taking advantage of this fragmentation by creating their own "ghettos of sharia". A report from Institut Montaigne, "The Islamist Factory", has detailed the radicalization of the French Muslim society.
Instead of integration, assimilation and Europeanization, Muslim extremists in France are pursuing multiculturalism, separation and partition. The enclaves of immigrants at the edges of French cities, posits Gilles Kepel in his book, La Fracture, foment "a rupture in values with French society, and a will to subvert it". "People do not want to live together", said France's former Interior Minister, Gérard Collomb, in comments reported by Valeurs Actuelles.
This "fracture" was noted again in the same publication: "Four out of ten boys in Seine-Saint-Denis have Arab-Muslim first names". Pollster Jérôme Fourquet revealed in a new study that "18 percent of newborn babies in France have an Arab-Muslim name".
France's "Great Switch" is underway. As the philosopher Alain Finkielkraut recently wrote, "The Notre-Dame fire is neither an attack nor an accident, but a suicide attempt."
Originally published at Gatestone Institute- reposted with permission.