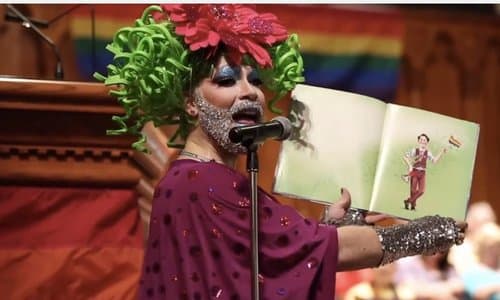 By PNW Staff July 02, 2019
Share this article:
Just when you think it can't get any worse in the church, it does. With Gay pride flags covering the hall and rainbow candles on the church stage, Cincinnati’s Mount Auburn Presbyterian Church greeted its visitors this past Sunday with Drag Queen "Sparke Leigh", complete in purple dress, makeup, high heels and a glitter beard.
Following the song "God Welcomes All" by the church choir, Sparke Leigh walked up on stage and, rather than reading from the Bible, read the book Pride: The Story of Harvey Milk and the Rainbow Flag to the audience.

Milk is considered the first openly homosexual elected politician in California and worked as a homosexual rights activist. The story was intended for children, some of whom sat at his feet during the reading. Milk was a well known pedophile.
At another point during the service, a man stood up and gave his ‘testimony’. Not of finding Christ, but of his "coming out" and acceptance of the Gay lifestyle.
Meanwhile, Ginter Park Presbyterian Church in Richmond, Virginia has just ordained its first pastoral candidate who identifies as gender non-binary (not exclusively masculine or feminine) over the weekend.
Cook becomes the first non-binary person to complete the PCUSA's ordination process but, no doubt, will not be the last.  Cook will fit right in with the recent nomination of Kathy Luecker, who had been asked to serve as president of the Presbyterian church's "A Corporation", which manages the church's real estate and finances.
Luecker was fired from the Presbyterian church fifteen years ago for meeting with the terrorist group Hezbollah, in Lebanon, but oh how times have changed.  Now the Presbyterians are leading the charge for the BDS movement which seeks to sanction Israel economically for its perceived injustices towards the Palestinians.

Each General Assembly has become a forum to see who can put forward the most anti-Israel resolutions. Many Jewish groups that try to build bridges with Christians say they can no longer work with Presbyterians due to their outlandish positions.
This is the same denomination that has continuously shown its pro-choice credentials by overwhelmingly rejecting a motion at its annual meeting suggesting the church publicly condemn the killing of babies born alive after botched abortions.
Fully 78 percent of delegates from the PCUSA voted against a "two year season of reflection on the plight of unwanted children," which called on church leaders to "issue statements that denounce the practice of killing babies born live following an abortion procedure, such as was revealed in the Dr. Kermit Gosnell clinic in Philadelphia."
You also have Auburn Seminary, affiliated with the Presbyterian Church, that held a breakfast to honor Planned Parenthood's Cecile Richards as a hero and someone worthy of emulation.
And of course the PCUSA is a member of the Religious Coalition for Reproductive Choice -- a group which supports Planned Parenthood financially.

The good news is that those who still hold to solid doctrine have abandoned this church.
Statistics made available by the PCUSA Office of the General Assembly (OGA) show the denomination continues to decline, dropping to 1,352,678 active members in 2018. A net 37 percent of members have died, transferred out, or simply vanished in the past decade.
The drop is consistent with an accelerating exodus of members since the denomination redefined marriage as between any two persons in 2014.  Despite the arguments by progressives within the Presbyterian church that these changes are needed to bring in young people, the exact opposite has happened as 56 percent of members are now over the age of 55.
At its current rate of shrinkage the PCUSA will not exist in about 20 years.  Sadly, the end of this "church" cannot come fast enough.