Faith On The Rise In Nepal 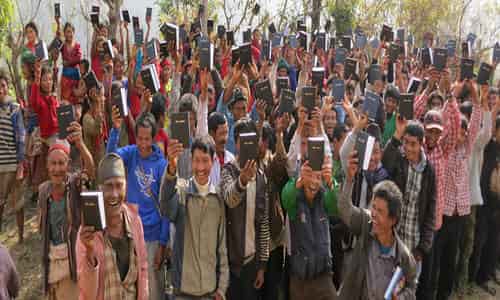 By Eric Metaxas/Breakpoint.org May 17, 2016
Share this article:
If I asked you to name the places where Christianity is growing the fastest, you, being a well-informed BreakPoint listener, would probably respond "Africa" and/or "China."

And you'd be correct. The explosion of Christianity south of the Sahara is so great that a colleague of mine is surprised whenever he meets a West African immigrant who's not a believer.
And as we previously told you on BreakPoint, Christianity in China is growing so rapidly that, by one scholar's estimate, there will be more Christians in China than in any other country by 2035.
But there are other, less-known places where the Good News is being heard and received.
One of these is Nepal. When Americans think of Nepalif they ever dowhat comes to mind is an exotic blend of the Himalayas, "wind-swept prayer flags," and temples, lots and lots of Hindu temples, with a few Buddhist stupas thrown in for good measure.
Until recently, that would have accurately summed up Nepal's religious scene. In 1951, Nepal's census showed nothat would be zeroChristians in the country. Ten years later, it showed just 458.
Forty years later, the number had risen to 102,000 and ten years later, i.e., in 2011, it had risen to 375,000. Whats more, according to a report by the International Institute for Religious Freedom, Nepalese Christian leaders believe that this last figure underestimates the number of Christian by a factor of six: instead of 375,000 Christians there are closer to 2.3 million.
That would put the percentage of Christians at nearly 10 percent and rising, as opposed to the governments claimed 1.5 percent. While Nepal is officially a secular country, it has an overwhelming Hindu majority that, historically, has tolerated a small Buddhist minority that poses no threat to the countrys Hindu identity.
By way of protecting this Hindu identity, Nepals interim constitution states that "no person shall be entitled to convert another person from one religion to another and shall not take actions or behave in a way that would create disturbance in another's religion."

This of course effectively outlaws evangelism. Yet Nepalese are converting to Christianity in large numbers.
Part of the reason is that the law is difficult to enforce. A larger part is that Christians have stepped into areas of need that neither the government nor the Hindu majority can or even will serve.
As is the case in India, many of the converts to Christianity come from the lower castes. Even though, as in India, discrimination on the basis of caste is illegal, centuries, if not millennia, of custom and practice arent reversed by the action of a parliament sitting in the capital.
What makes a difference in the lives of these people is other people whose own faith not only rejects the idea of caste but also insists that in ministering to the least of these, they are ministering to God himself.
In yet another parallel to India, Nepalese Hindu activists aren't pleased by the results. So much so that they may be willing to manipulate census figures.
What's happening in Nepal is good news, indeed. Its also a reminder than Islam does not have a monopoly restricting religious freedom, especially when it comes to Christians.
Recently, a Lutheran pastor was found murdered in the Indian state of Jharkhand. His death is believed to be a part of a larger pattern of anti-Christian violence by Hindu nationalists.
So, in addition to thanking God for the spread of the good news to unlikely places, please keep these vulnerable brethren of ours in prayer.
Originally published at breakpoint.org - reposted with permission