Antifa Takes Over Portland, Again: Politics 'By Any Means Necessary' 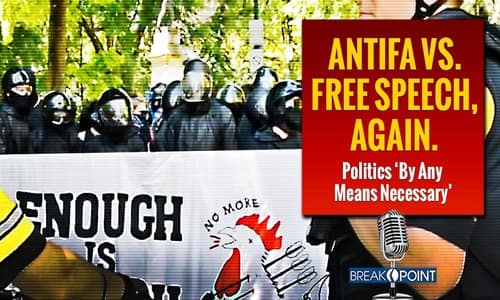 By John Stonestreet/Breakpoint.org July 08, 2019
Share this article:
America's founders believed that the freedom to express political and religious opinions, even unpopular ones, was central to self-government. Still, the freedom of speech, like all freedoms, has its limits. We can't just shout "Fire!" in a crowded theater, for example.
Antifa, a group of leftist radicals, believes differently. Any ideas other than their own are not only wrong, they're dangerous and must be shut down by, and I quote, "any means necessary."

These are more than words. Just ask Quillette journalist Andy Ngo, a conservative, who has been documenting Antifa violence for a while now.
This past weekend, in Portland, he was recording an Antifa mob as they "protested" another rally held by a right-wing group called "The Proud Boys." Protesting is as American as apple pie. It's especially common in Portland. But if you're wearing a ski mask and holding a baseball bat, protester might not be the right word for you.
Antifa knew in advance that Ngo would be there, and he expressed concern for his own safety on social media before going. His concerns turned out to be valid. He was pelted with milkshakes, sprayed with silly string, then punched and kicked to the point that he was bleeding and had to go to the emergency room.
The media coverage, to put it lightly, was odd. CBS described the event only as a clash between Antifa and right-wing groups. The only mention of Ngo was that he claimed on Twitter to have been attacked. Never mind the fact that a journalist from the Portland Oregonian had filmed it.
Left-wing blogger Jesse Signal rightly called the attack insane, listing and documenting other journalists also physically assaulted by Antifa. But many others of the Punderati on the Left debated whether or not Ngo had it coming to him, and whether his politics made him an acceptable target for violence.

Despite their name, Antifa is not ultimately driven by their opposition to fascism. What they consider to be fascism is fully informed by a far-left worldview, including far-left ideologies like socialism, communism, and anarchy. These are ideologies which tend to see opponents not only as wrong, but as obstacles to their utopian fantasies.
The recent Portland "protest" and assault--actually assaults, because there were others--are just the latest in a long string of riots with Antifa at their center. During the Trump Inauguration, 230 so-called "protesters" were arrested for smashing windows and starting fires.
In February of 2017 at Berkeley, Antifa demonstrators threw Molotov cocktails to halt a speech by Milo Yiannopoulos. The same month, the Portland city council was forced to shut down a public forum after Antifa threatened violence. In August of that year, Antifa members, trying to disrupt a free speech rally in Boston, threw urine-filled projectiles at police.
Given this history of violence, you'd think Portland authorities would have been better prepared. Mayor Ted Wheeler has come under fire for not containing the violence. In fact, the Portland Police Association has called on the mayor to "remove the handcuffs from our officers and let them stop the violence through strong and swift enforcement action."
Now how exactly the mayor has handcuffed the Portland police, I don't know, but let's hope and pray he will take the necessary steps to preserve order and the safety of his citizens. If he can't or won't, he should step down.

In the same way, a truly free media can't have it both ways. Criticizing President Trump for saying the media is "the enemy of the people" is absolutely justified, but staying mum when one of your own is beaten in the streets by Antifa, just because he is conservative, is absolutely not.
Good for folks like Jake Tapper, who tweeted: "Antifa regularly attacks journalists. It is reprehensible." And good for CNN for allowing Ngo to tell what happened to him, on air.
As I said two years ago, people on both sides of the political aisle who disagree on nearly everything can still agree that the right to peacefully assemble, to debate and protest is a foundation of our Republic, and that political violence has no place in our country, whether it's from the left or the right.
Originally published at Breakpoint.org - reposted with permission.