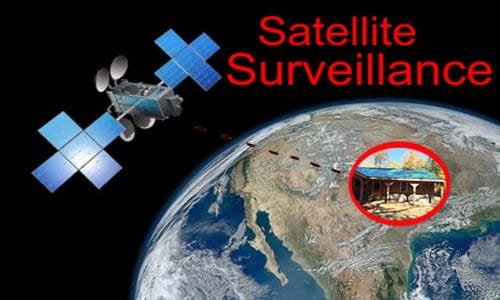 By Nicholas West/Activist Post July 08, 2019
Share this article:
The emergence of low-cost micro satellites is a trend that I've been covering for several years. It has spawned a global surveillance arms race that has drawn interest from the usual military sources like GEOINT, DARPA and Lockheed Martin, as well as commercial interests such as DigitalGlobe and EarthNow, the latter of which received backing from Bill Gates.
The holy grail is, of course, to create a web of surveillance with the capability to access streaming HD video in real-time for any location on the planet.
Such activities worth looking at have been noted as "tracking illegal fishing, monitoring the weather and tracking natural migrations globally."  Gizmodo noted a few other possibilities:
...watching hurricanes and typhoons as they evolve, detecting forest fires the moment they start, watching volcanoes the instant they start to erupt, assisting the media in telling stories from around the world, tracking large whales as they migrate, helping "smart cities" become more efficient, providing on-demand data about crop health, and observing conflict zones around the world.

Project developers at EarthNow have stated that they want to offer public access to this real-time data stream from their tablets and smartphones ... so that we can better appreciate our precious planet and its inhabitants, of course:
'We believe the ability to see and understand the Earth live and unfiltered will help all of us better appreciate and ultimately care for our one and only home.'
'We are excited by the prospect of giving everyone a stunningly beautiful real-time window on your world from space,' Mr Hannigan said.
'With EarthNow, we will all become virtual astronauts.'
However, the rapid development and deployment of this technology is beginning to raise questions about privacy that previously had only been asked by independent media.
I was startled to see MIT Technology Review weigh in with this recent title: "Soon, satellites will be able to watch you everywhere all the time -- can privacy survive?" It's a long and extremely detailed article that begins by recounting a few select cases where satellite imagery has been called upon to observe suspected illegal activity.
However, we are apparently approaching a new threshold where image quality is becoming far sharper, many more satellites have been launched, and cost is being reduced to the point where access to images and video could become much more commonplace.

In 2008, there were 150 Earth observation satellites in orbit; by now there are 768. Satellite companies don't offer 24-hour real-time surveillance, but if the hype is to be believed, they're getting close.
Privacy advocates warn that innovation in satellite imagery is outpacing the US government's (to say nothing of the rest of the world's) ability to regulate the technology. Unless we impose stricter limits now, they say, one day everyone from ad companies to suspicious spouses to terrorist organizations will have access to tools previously reserved for government spy agencies. Which would mean that at any given moment, anyone could be watching anyone else.
But satellite imagery is improving in a way that investors and businesses will inevitably want to exploit. The imaging company Planet Labs currently maintains 140 satellites, enough to pass over every place on Earth once a day.
Maxar, formerly DigitalGlobe, which launched the first commercial Earth observation satellite in 1997, is building a constellation that will be able to revisit spots 15 times a day. BlackSky Global promises to revisit most major cities up to 70 times a day. That might not be enough to track an individual's every move, but it would show what times of day someone's car is typically in the driveway, for instance.
Some companies are even offering live video from space. As early as 2014, a Silicon Valley startup called SkyBox (later renamed Terra Bella and purchased by Google and then Planet) began touting HD video clips up to 90 seconds long. And a company called EarthNow says it will offer "continuous real-time" monitoring "with a delay as short as about one second," though some think it is overstating its abilities.
Everyone is trying to get closer to a "living map," says Charlie Loyd of Mapbox, which creates custom maps for companies like Snapchat and the Weather Channel."

What will make the imagery even more powerful is the ability to process it in large quantities. Analytics companies like Orbital Insight and SpaceKnow feed visual data into algorithms designed to let anyone with an internet connection understand the pictures en masse.
Investors use this analysis to, for example, estimate the true GDP of China's Guangdong province on the basis of the light it emits at night. But burglars could also scan a city to determine which families are out of town most often and for how long.
We can now imagine a time (fast approaching) where the same privacy issues that have plagued smartphones and other smart gadgets could arise when there is a global camera that runs 24/7. However, as MIT states: "While GPS data from cell phones is a legitimate privacy threat, you can at least decide to leave your phone at home. It's harder to hide from a satellite camera."
Luckily, at this stage, there are still prohibitive costs associated with real-time long-term monitoring, but for how much longer? It also remains unclear how to protect protect privacy when the barriers between private and public are even less delineated than they've become already. Government regulation, for what that is even worth, hasn't set out any firm rules yet.
MIT concludes with comments from human rights activist Nathaniel Raymond that should have all privacy advocates concerned enough to start asking serious questions about where this is headed:
Until we can all agree on data privacy norms, Raymond says, it will be hard to create lasting rules around satellite imagery. "We're all trying to figure this out," he says. "It's not like anything's riding on it except the future of human freedom."
Originally published at Activist Post - reposted with permission.