Did France Get The Memo? 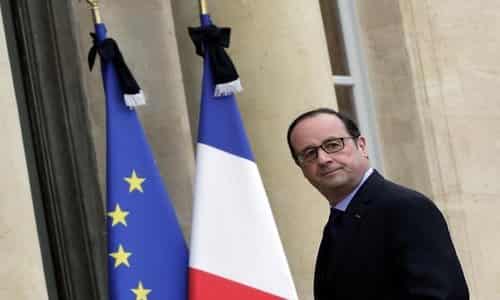 By Judith Bergman/JNS.org May 17, 2016
Share this article:
Imagine this news story:
"Last week, Israel convened representatives of 20 countries from across the world for an international conference to discuss what to do about the escalating security situation in France.

"'Israel has no vested interest but is deeply convinced that if we don't want to let the ideas of the Islamic State group prosper in this region, we must do something,' Prime Minister Benjamin Netanyahu said when asked why he was pushing for the conference despite France's vehement protests.
Netanyahu put special emphasis on the fact that 'the international community feels there is an urgent need to find a solution to the spread of Islamic State in Europe, especially in France, which has the largest Jewish population on the continent.'
"'We are not giving up, and neither are our partners,' said the Israeli prime minister.
"Discussions at the meeting will be based on a new groundbreaking peace proposal under which France will give up large swathes of the south of France as well as the entire Ile-de-France in return for a permanent peace agreement with Islamic State in order to create 'a just solution' to the conflict. An Islamic State spokesman told reporters that unlike the French, they welcome the Israeli initiative.
"'We wish Israel and its efforts success because the Israeli efforts are the only ones on the ground now, and could eventually result in giving the political process a good push forward at this stage,' the Islamic State spokesman said.
"'The aim of the conference is to prepare an international summit in the second half of 2016, which would include French leaders and leaders of Islamic State. The second conference would take place 'sometime in the fall,' said a spokesman for Netanyahu."
Of course, the above scenario is fake. I have produced it here merely to make a point. Israel is not convening any conferences on the future of France, nor is it meddling in its affairs.
There is a principle of international law called sovereignty, but in France and the rest of the European Union, that principle has been gradually usurped by a new principle, that of supra-nationalism.
Unfortunately, and despite the fact that Israel is not a member of the European Union, France and company appear to be unrelenting believers in the extension of this principle all the way across the Mediterranean to the Middle East.
What is not fake, however, is that this exact scenario is indeed taking place, but instead of Israel hosting a conference about France's out-of-control problems with Islamist terrorism, which are indeed affecting French Jews in the most appalling ways, France is hosting a conference about the future of Israel's territorial borders.
Thus, despite Israel's protests, France has convened an international conference for May 30, consisting of ministers from 20 different countries who will presume to lord it over Israel's future.

Clearly, France and company did not get the memo about decolonization, or rather France and company seem just fine with exhibiting colonial behavior toward only one nation in the entire world, namely obstinate Israel, which still refuses to dance to the tune of the Europeans.
While the aim of the French initiative is to "encourage" bilateral negotiations, let no one be fooled: This is really about pushing an agenda down Israel's throat, namely that of the 2002 Saudi peace initiative, which asks nothing less than Israel's withdrawal to the 1949 armistice lines and a "just" solution to the refugee issue without specifying what that means.
In other words, the initiative makes very serious demands on Israel concerning its existential issues, while being extremely shady on what Israel is supposed to receive in return.
Also why drag this long-dead rabbit out of the old hat now, when the Palestinians have shown no sign whatsoever of letting up in the terror war against Israeli civilians and soldiers through ramming, stabbing and shooting attacks? All this conference does is reward terrorism.
What is, of course, conspicuous, is the timing. It is scheduled at a time when Europe is coming apart at the seams with the terror threat from Islamic State and the infighting in the European Union between the European Commission and the central and Eastern European members of the EU, whom the EU's executive branch is threatening with huge fines for each migrant that these countries refuse to receive.
One cannot help but think that Israel, once more, is proving to be a very useful diversion (and scapegoat) for all the unrelated problems of the Western world.
Originally published at JNS.org - reposted with permission.