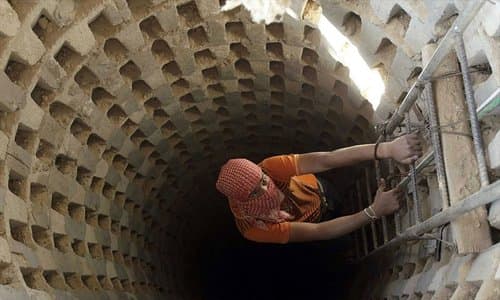 By Yaakov Lappin/JNS.org July 17, 2019
Share this article:
The discovery of the latest cross-border Hamas tunnel this week stretching from the Gaza Strip into Israel is a reminder of the fact that Hamas will soon lose this attack capability.
The tunnel was discovered during the construction of Israel's underground barrier, which is designed to block the path of Hamas's diggers. The subterranean wall uses sensors that send alerts to the Israel Defense Forces if Hamas attempts to dig in Israel's direction.
Since the end of the summer 2014 conflict between Israel and Hamas, the IDF has discovered 18 cross-border tunnels, using advanced detection systems, and more recently, through the construction of the underground wall.

The 40-mile-long barrier is due to be complete by the end of this year. When it will be done, armed terror squads from Gaza are expected to lose the ability to sneak under the Israeli border to conduct killing and kidnap missions in future wars.
Yet Hamas's military wing still has a complex network of defensive combat tunnels, which run under Gaza. This "underground city" enables terror cells to move around out of sight of the Israeli Air Force, and transfer personnel and weapons around the Strip, particularly in the event of an Israeli ground offensive.
It seems safe to assume that the IDF is busy mapping out these tunnels, too, and that it is developing ways of turning them into death traps in a future conflict.
Since the end of the 2014 conflict, enough cement has entered Gaza to build 16 Burj Khalifa skyscrapers in Dubai--the tallest building in the world. That cement has largely gone underground, feeding Hamas's war machine.
Gaza's soft sandstone made it possible for diggers to make rapid progress during the peak days of the tunnel project. The tunnels contained rails, electricity, ventilation, communications lines and oxygen tanks--tanks that were originally sent to Gaza for hospital use.
The tunnels are a symbol of Hamas's priorities: The military build-up always takes precedent over investing funds in Gaza's civilian population.
Shifting to other attack methods
Hamas is, however, a learning organization, and it appears to have realized some time ago that time is running out on the attack tunnels.
As a result, it and other terror factions in Gaza have doubled down on other offensive capabilities.
Foremost among these is the rocket arsenal. Unlike Lebanon, Gaza is not known to have guided rockets at this time, but the size of the Gazan rocket arsenal is growing, and the threat is one of sheer quantity.

Palestinian Islamic Jihad, the 15,000-strong terror faction (compared to the 35,000-strong Hamas), has also been investing heavily in expanding its own rocket arsenal and was able to overtake Hamas in possessing the largest quantity of projectiles in Gaza.
Both organizations receive Iranian money--some $100 million in the past two years, according to Mossad chief Yossi Levi--and Iranian technical know-how. They convert these into a sprawling domestic-arms industry that produces Gaza's rocket arsenal at home, without the need to depend on smuggling.
Hamas uses every component at its disposal for rocket manufacturing, even salt for propellant needed during the initial launch phase. The combined arsenal of Hamas and Palestinian Islamic Jihad exceeds 20,000 rockets.
During a recent escalation that erupted in May following a PIJ sniper attack, Gazan terrorist factions fired 690 projectiles at southern Israel in a mere two days and tried to overwhelm the Iron Dome air-defense system.
Iron Dome nevertheless performed well, intercepting 86 percent of rockets heading for populated areas. Still, Gaza's factions were able to concentrate their fire in a lethal manner. Four Israelis were murdered in the escalation, including one whose vehicle was hit with a Hamas anti-tank missile. Such weapons have also become a focus area for Gaza's factions.
Both organizations are also trying to create armed drone fleets. PIJ used one such drone in a failed effort to bomb an IDF tank during the May escalation; this incident is an indication of the growing importance of this attack method.

Israeli home front the primary target
Hamas, meanwhile, is working on an ability to launch sea-based attacks using terrorist commando cells.
These activities are all presumably occurring under the watchful and piercing eye of the IDF, which is preparing accordingly.
According to Brig. Gen. (res.) Shachar Shochat, former Air Defense Command chief, non-state actors have placed the Israeli home front as their prime target. The dispersion of rocket launchers in built-up civilian Gazan areas forms an additional challenge. An ongoing cat-and-mouse game of solutions and challenges is underway.
The May escalation also contained a hint of Israel's overwhelming offensive capabilities.
The Israeli Air Force, for its part, struck more than 350 terror targets across Gaza in retaliation, killing approximately 30 Hamas and PIJ operatives, and destroying many high-value enemy targets that were embedded within civilian neighborhoods. The combination of quality intelligence and precision firepower is designed to deal with the asymmetric challenge from Gaza.
Meanwhile, Israel's ground forces, who have not set foot in Gaza in five years, are preparing a range of new abilities in case they are called to enter the Strip the next time that warning sirens begin going off in Israeli cities.
Originally published at JNS.org - reposted with permission.