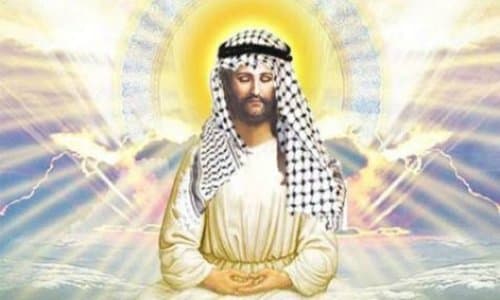 By Adam Eliyahu Berkowitz/Breaking Israel News July 17, 2019
Share this article:
Left-wing political activist Linda Sarsour angered many on Saturday when she tweeted that Jesus was a Palestinian.
Linda Sarsour
@lsarsour
'Jesus was Palestinian of Nazareth and is described in the Quran as being brown copper skinned with wooly hair.'
Sarsour, a Brooklyn-born Muslim of Palestinian immigrant parents, based her description of Jesus on the Koran, in which Jesus appears prominently. Her response was perplexing as Sarsour, whose parents, like Jesus, were born in Israel has very pale skin.

Many twitter responses pointed out the anachronistic nature of her statement, noting that there has never existed a political entity called Palestine and at the time Jesus lived, Bethlehem where he was born and Nazareth where he lived were parts of Israel. Others pointed out that both of Jesus' earthly parents were Jewish. Sarsour responded that Palestinian is a nationality (despite not having an actual country) and not a religion.
She added that "Jews lived with Palestinians in peaceful co-existence before there was a state of Israel." This statement is grossly inaccurate, ignoring Palestinian pogroms against Jews under the British mandate. It also ignores the roots of Palestinian under Haj Amin al-Husseini, an enthusiastic ally of the Nazis and supporter of the Holocaust.
Sarsour later tweeted that "Bethlehem is in Palestine. It's currently militarily occupied by Israel and home to a predominately beautiful Palestinian Christian community." This statement is also grossly inaccurate, ignoring the current state of Christianity under Palestinian rule.
It is true that Bethlehem, one of the holiest cities for Christians has historically been majority Christian and in 1950, Christians represented 86 percent of the population.
In 1995, the IDF withdrew from the city and the Palestinian took over jurisdiction. Today, the Christian population stands at less than two percent. Christians in Bethlehem report widespread PA sanctioned violence and oppression.
Laurie Cardozo Moore, the founder of "Proclaiming Justice to the Nations," an organization that seeks to educate Christians about their Biblical responsibility to defend Israel and the Jewish people, was highly critical of Sarsour's remarks, issuing a personal message.
"Once again, Sarsour is using disinformation to legitimize her propaganda," Cardozo Moore told Breaking Israel News. "However, now she's resorting to using the Bible to spread her disinformation?  Wow! Linda, Jesus  was born a Jew and kept the Torah of Moses.

In fact, he came to teach the return of the Kingdom of God, which by the way, includes the return of the 12 tribes to Israel, the Land of Covenant that God gave to Abraham, Isaac, Jacob and their descendants forever!  The New Testament documents Jesus' lineage as the Son of David, the Son of Abraham... not Ishmael.
The region Jesus was born, lived, taught and died in was Judea and Samaria. The Palestinians didn't even exist back then! There is no evidence to legitimize your ridiculous statement!  May I suggest a good Hebrew Bible class?"
In addition to her controversial comments about Jesus, Sarsour, who has been accused of being anti-Semitic, is also opposed to Christians who support the Jewish State. She accused long-time lover of Israel Pastor John Hagee of being an anti-Semite and his organization, Christians United for Israel, of being racist.
Sarsour's comments could be seen as an anomaly, a rogue opinion inconsistent with the left-wing or Democrat party however she was not the first Democrat to make this statement concerning Jesus.
In April, Rep. Ilhan Omar (D-Minn.), who is neither a Palestinian nor a Christian, retweeted a New York Times op-ed by Eric V. Copage, which claimed that "Jesus, born in Bethlehem, was most likely a Palestinian man with dark skin."
This claim was first made from within the Democratic party by Reverend William Barber II who stated as much in his address to the 2016 Democratic National Convention that was described by the media as "rousing and was well-received." Rev. Barber referred to Jesus as a "brown-skinned Palestinian Jew."
If the Democratic party has adopted this perception of Jesus, then it is one the received from a Palestinian other that Sarsour. It is believed that the credo was an invention of Yasser Arafat's adviser Hanan Ashrawi, a Christian, who said in an interview to the Washington Jewish Week on February 22, 2001, that "Jesus was a Palestinian."
This became the official PLO platform as evidenced by their frequent reference to Jesus as "the first Palestinian martyr" and whose annual Christmas statement reads, "Every Christmas, Palestine celebrates the birth of one of its own: Jesus."
We also now have other politicians from Western countries joining the bandwagon as a lawmaker for New Zealand's Greens Party said Jesus' mother, Mary, and her husband Joseph, were Palestinian refugees.
Golriz Ghahraman wrote on Twitter: "They were literally Palestinian refugees. And she (Mary) normally had her hair covered because that's what modesty looked like in her culture..." Ghahraman was born in Iran and her family sought asylum in New Zealand when she was a child. In 2017, she became the first refugee to be elected to the New Zealand parliament.
Sarsour's History of Deception
Sarsour's political agenda appears to be as deceptive as her statements about Jesus. Her early activism included advocating for the civil rights of American Muslims following the Islamist 9/11 attacks in 2001. Sarsour initially gained attention for protesting police surveillance of American Muslims.
Her non-Muslim related activism is decidedly left-wing. She was an organizer for the Black Lives Matter movement and, like Brooklyn Congressman Alexandria Ocasio Cortez, is a member of the Democratic Socialists of America.
In 2012, during the presidency of Barack Obama, the White House recognized Sarsour as a Champion of Change. Sarsour was a surrogate for U.S. Senator Bernie Sanders during his 2016 presidential campaign.
An outspoken opponent of President Trump, Sarsour raised hackles in 2017 when she said in a speech to the Islamic Society of North America she deemed Trump's administration oppressive and asked that her opposition to Trump be considered a "jihad" (holy war) in the eyes of Allah.
Before the Women's March last year, Sarsour and several other leaders of the feminist initiative were asked to step down amid accusations of anti-Semitism.
Chiman Zebari, the Kurdish Director of Middle Eastern Women's Coalition, question whether Sarsour's support of Sharia is consistent with her role in the feminist movement.
"As an acclaimed advocate of feminism and leader of a movement that should support women's rights and universal equality, she has refused the rights of women who are pro-life to join in on her movement," Zebari wrote on Rudaw.net. "She has also claimed one cannot be a feminist and support Israel.
Then there is her support of Sharia law, a part of Middle Eastern culture that some in society falsely interpret to allow for female genital mutilation, 'honor' killings, and makes legal the practice of forced child marriages where girls as young as 7 years who have been forced to wed much older men."
Originally published at Breaking Israel News - reposted with permission.