Chinese Christians Need Refuge: Will We Welcome Them? 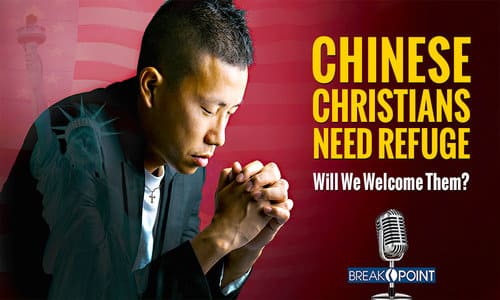 By John Stonestreet/Breakpoint.org July 23, 2019
Share this article:
When the Communist Party took over mainland China in 1949, there were an estimated 5 million Christians. Three-plus decades of severe persecution under Mao nearly succeeded in eradicating Chinese Christianity.
Nearly. By 1976, less than four decades after Mao's rise to power, Christians in China numbered between 60-80 million. That's a low estimate. The actual number could be even higher.
As Evan Osnos of The New Yorker wrote a few years ago, "as I traveled around China, I stopped being surprised by my encounters with Christians."

Today, as we've discussed many times on BreakPoint, the Communist Party is cracking down on religious minorities, including Christians. Among the reasons is that Chinese leader Xi Jinping has embraced a Mao-like cult of personality.
The current crackdown includes raids and even bulldozing churches, arresting pastors, and discrimination in employment against people holding religious beliefs.
Given this increasingly hostile environment, it shouldn't surprise anyone that, as Fox News recently reported, many Chinese Christians are fleeing the country. Included in the report was the story of Liao Qiang, a member of the Early Rain Covenant Church, which was raided in December 2018. More than 100 of its members were taken into custody.
After the raid, as she told the Associated Press, Liao's daughter had to "report her whereabouts to police using social media whenever she left her home." And she was informed that "her safety would not be guaranteed."
This caused Liao to conclude China was no longer a safe place for him or his family. So he fled with them to Taiwan, with hope they will be allowed to enter the U.S. as refugees.

Given recent realities in China, including the mass detention of Muslim Uighurs, even more drastic forms of persecution could be in in the future for Chinese Christians. All of this means we will likely see more Christians fleeing from China as refugees. The question is: Where will they go?
Back in April, World Magazine reported that "Under the Trump administration, refugee admissions have plunged to historic lows, with persecuted Christians in the Middle East suffering from the fallout."
To be clear, these "historic lows" are really low. "The number of Middle East Christians admitted into the United States in 2018 fell by a staggering 98 percent from 2016. Christians from countries that Open Doors ranked highest for religious persecution saw a 76 percent decline from 2016 to 2018."
The numbers in 2019 will be even lower: In the first few months of this year, "30 Iranian Christians, 25 Iraqi Christians, and zero Syrian Christian refugees" had been admitted to the United States.
Absent a major change of heart and policy, there's no reason for Chinese Christians to expect refuge in the United States. Other countries could pick up the slack, of course, but why would we expect them to when the world's leader in protecting religious freedom has stopped leading by example? And, we have stopped.

I will repeat what I said back in April, "Christians have enjoyed nearly-unprecedented access to the White House, to administration officials and many of the promises made to us have been kept. Unfortunately, the promise to aid persecuted Christians around the world has not been kept."
I understand we are in the midst of a nation-wide and deeply divisive struggle over how to handle illegal immigration, especially on the southern border. The issue of Christian refugees should not be conflated with that conversation. The Trump administration specifically promised to help persecuted Christians around the world and is, this week, holding its second annual ministerial on the issue of religious persecution.
We need to make it clear that, knowing what may await our Chinese brethren, we must back up any talk about religious freedom with real, tangible actions. That must include giving Christian refugees a place of refuge.
If that sounds harsh, ask Liao Qiang about what harsh really looks like.
Originally published at Breakpoint.org - reposted with permission.