Beauty Salons Being Shut Down For Refusing Wax Services To Transgenders 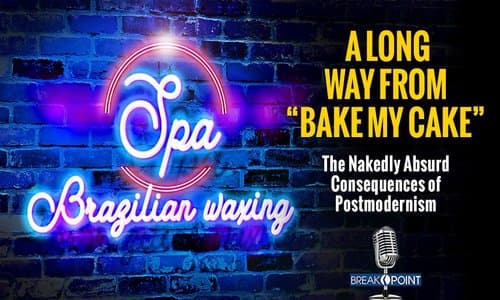 By John Stonestreet/Breakpoint.org July 31, 2019
Share this article:
You might think this is another story about transgender activism. And in a way, it is. But at an even deeper level, this is a story about postmodernism. Stick with me on this.
Canada's National Post recently reported that a British Columbia Human Rights Tribunal heard the case of Jessica Yaniv, who accused a home beauty salon owner of illegal discrimination.
The owner refused to give Yaniv a Brazilian wax. If you don't know that term, it means the complete removal of hair from, well, sensitive areas.
Yaniv is a transgender woman. In other words, Yaniv is biologically and anatomically male, identifies as a woman, and has not undergone any kind of surgical transition.

Salon owner Marcia Da Silva normally offers this service to women.
She told the tribunal that she has no problem with LGBT individuals, and that she'd even be okay offering her services to a biological man who'd already surgically transitioned.
But she was not comfortable working on male body parts.
She was so shaken by the incident, she chose to shut down her business. And she's not the first victim.
Apparently, Yaniv is something of an activist. He's filed over a dozen civil rights complaints against salons who refused to wax him.
According to the National Post, while some of these cases have been dropped or settled, Da Silva's case went to hearing, where Yaniv compared her to a Neo-Nazi, and said that if she wasn't forced to give him the wax he wanted, it would set a "dangerous" precedent.
Now, we could talk about how this circus is the inevitable result of LGBT ideology, and how, once again, the "how will my private choice affect you?" line has been demonstrated false.
To paraphrase one popular Twitter user, we sure escalated quickly from "bake my cake."
It's important to notice that the crusade of this narcissistic individual is based on the same claim made by those who sued Jack Philips: that a business should not discriminate based on sexual orientation or gender identity.

Well, if that's really a principle courts and tribunals want to enforce, it won't just apply to gay wedding cakes. It will mean compelling beauty salon owners to do and see things in way that amounts to a sexual violation.
While transgenderism is certainly one of the branches bearing this new troubling fruit of violating other's consciences, decency, and innocence, it's not the root. The root idea is an older idea: postmodernism.
At its heart, postmodernism posits that neither revelation nor reason can give us the story of reality.
In fact, according to postmodernism, there is no universal, discernible story of reality. Truth is a social construct for the postmodernist, even observable truths like male and female.
External, seemingly objective facts are, to the postmodernist, clouded by our endless interpretations, which are shaped by our own experiences and cultural biases, and whatever meanings we want to attach to them.
Postmodernists hold that certain viewpoints and interpretations have been oppressed and disempowered.
So, for the last few decades, there's been a concerted effort to elevate and prioritize those viewpoints, whether they correspond to reality or not.

This is how people like Marcia Da Silva find themselves dragged before human rights tribunals for not landscaping male genitalia.
Somehow, in a strange ideological twist of reality, she is the oppressor, and Yaniv is the oppressed.
This is exactly what's happened wherever a postmodern worldview has been applied - in the name of elevating a viewpoint, another one is oppressed.
Of course, Yaniv may have never even read a postmodern philosopher.
But bad ideas can become entrenched and unquestioned in our minds and our culture in all kinds of ways.
And as long as we're committed to reality being something individuals can never really know, but can always remake and impose on others, the victims of these bad ideas will continue to multiply, and the demands will become ever more nakedly absurd.
Originally published at Breakpoint.org - reposted with permission.