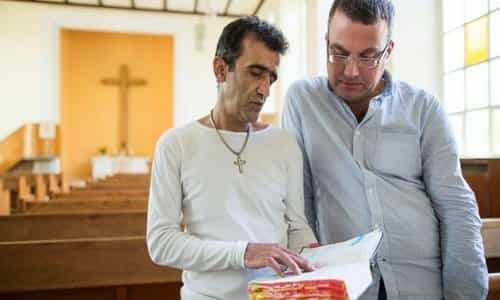 By PNW Staff May 18, 2016
Share this article:
Many Muslim refugees fleeing war-torn Syria, and other Middle Eastern countries are converting to Christianity once they get to Europe, various news organizations are reporting. While there would be harsh repercussions for doing this in Syria or Iraq, there are still some obstacles new believers face.

Christianity Today reported on a mass baptism of 80 refugees from Iran and Afghanistan in Hamburg, Germany. Albert Babajan, the pastor doing the Baptisms, said there have been about 200 so far this year and he expects as many as 500 before the year ends. Denmark and Austria are also having mass conversions among refugees.
But just because they are in Europe, in a new country that is more open to religious freedom, that does not mean their troubles are over. Other organizations are reporting that once these people convert they are persecuted by Islamic leaders within the refugee groups.
While a convert would most likely be killed if discovered in Syria, they are still being threatened in their new country.
Another obstacle is some people question their sincerity. Those applying for refugee status in Germany are given preferential treatment if they are Christians, so some accuse them of converting for that reason. But even if they did that, they would still face being rejected by their families as well as threats of violence for becoming apostate to the Muslim faith.
Pastor Babajan said he is aware of those accusations, and he says he interviews those wanting to be baptized. He asks them how their life has changed since they started believing. He said when a person accepts Christ they have a new outlook, and that is what he is looking for.
As a result of questioning those new converts, he has turned away many whose sincerity he questioned. Babajan said 20 to 30 percent of those seeking baptism are sincere and he baptizes them into the faith.
Those who are not just seeking better treatment by converting, are doing so because they have become disillusioned with Islam. An Iranian woman said she had sought peace and happiness in her life, but she did not find it in Islam. She did find it in Christ, and that has been the story of many of those who have had sincere conversions.
The Christian Post is reporting a Berlin church has grown from 150 to 600 this year, filled with Islamic members who have converted to Christianity. The Berlin pastor also realizes some might be trying to beat the system, but he still welcomes them because he believes they will be changed by the experience with the church.

While Germany is giving special treatment to Christians, that is not the case in other European countries. In Denmark they get no priority in the application process based on religion. Still, they are seeing Muslims hungry for the gospel. In one example, a Muslim couple were invited to a Bible study where there were about 14 people, and the next week they brought 50 more people.
They are told they will get no special treatment for converting, and warned about what will happen to them if they are sent back to their home country, and they still want to convert.
Many of the converts in Denmark were "secret" Christians in Iran, where a person might be killed if they converted, and certainly would be if baptized. According to Islam, a person who is baptized has rejected the faith and is an apostate.
Some are also having dreams, such as those recorded in Bible book of Acts, where a person was told to find someone who would tell them about Christ. The interesting thing in Denmark is that it is Muslims seeking out Christians to find out how to believe as there is no organized outreach program.
In Austria, the Christian Daily is reporting an 83 percent increase in conversions from Islam to Christianity.
The only downside in Austria, is that more refugees have indeed increased the number of radicals, and converts are facing persecution and threats in Austria.
Persecution and threats seem to be continuing in Germany and Denmark, but people are still gladly converting, and even seeking it out, according to the news reports.
There seems to be more persecution of converts in Germany as well, as they are threatened and even attacked in the German refugee camps. Several organizations are calling on the German government to offer more protection.
Even so, there seems to be a tremendous interest in converting from Islam to Christianity among the refugees coming to Europe. It is ironic that Europe has been seen as a place where Christianity is fading, yet it is slowly creating a revival for Muslims who are flocking there to be converted.