Cities Without Children: The Cost Of Our Urban Idols 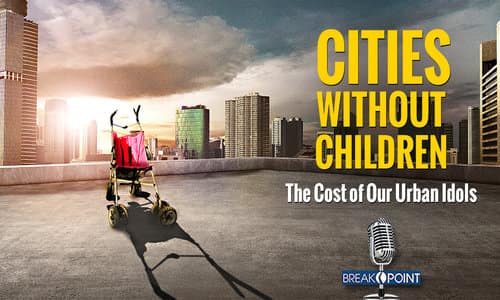 By John Stonestreet/Breakpoint.org August 08, 2019
Share this article:
Yesterday, I told you about a district in northern India where, according to reports, not a single girl was born for three months. The main cause of the shocking gender imbalance we see around the world, and especially in India, is sex-selective abortion.
In reaction, some of us may be tempted to think, "well, what do you expect from people who worship idols with blue skin and elephant heads?"
That would be exactly the wrong reaction. After all, Western countries have idols, too. Worshiping our idols also coincides with a lack of children, and not just baby girls.

Recently in The Atlantic, Derek Thompson points out that, despite a decade-long economic and cultural boom in our cities, America's urban rebirth is missing actual births. In fact, if current trends continue, the future of American cities is virtually childless.
Take New York City. Last year, for the first time in forty years, the Big Apple's population shrank during a non-recession year. Since at least 2011, the number of babies born in the five boroughs has declined by nine percent.
In Manhattan, it's dropped 15 percent--again, despite a pronounced economic recovery. At this rate, says Thompson, the city's infant population will halve in thirty years.
Of course, part of this has to do with the rising cost of living in America's cities. Increasingly, the only people who can afford to move there are "rich, college-educated whites without children."
Still, Thompson makes a compelling case that, while it may appear that cost of living is changing the composition of our cities, it actually works the other way around. The modern city has become "an Epcot theme park for childless affluence, where the rich can act like kids without having to actually see any."
This explains why prices are climbing while population is dropping. According to U.S. Census and American Community Survey data, white college grads without kids have increased by 20 percent in America's urban centers since 2000, while families with kids have fled.

Cities once had people of all ages and stages, but they've now become revolving doors for people of a particular description, at a particular moment in life.
The gentrified, "brunchable" neighborhoods popping up everywhere and pushing families out aren't just temples to the idol of youthful self-indulgence. They also facilitate the worship of work.
The richest 25 metro areas in the country now account for half of the U.S. economy, and just five counties--mostly the famous "Silicon Valley," contain half of the nation's "internet and web-portal jobs."
This is the sort of environment in which only the young and childless can thrive. Companies that set up shop in these major downtown areas increasingly demand a set of life choices that Thompson dubs "workism"--delaying marriage and family in favor of intense, high-paying jobs that go largely to support adult-centric lifestyles. In other words, we're "swapping capital for kids."
This service to modern, urban idols not only results in cities devoid of children. It even has political effects, concentrating "blue" voters in tiny regions where their ballots won't change the outcome of elections. This deepens already sharp regional divisions and drives our nation's political fever ever higher.

According to Thompson, there are some things city governments can do to help reverse or at least slow the process of creating childless cities. Notably, add family-friendly spaces and more affordable housing.
Still, one need not read between the lines of the article to realize it's not just zoning laws that have turned our cities into theme parks for grown-ups.
The true blame should be placed on a culture that worships the wrong things. It's no coincidence that the country's highest abortion rates and lowest rates of church attendance are both found in cities.
Yes, developing countries who kill their children surely have a lot to answer for, but we in the West are only deceiving ourselves if we think our false gods are any less demanding.
Originally published at Breakpoint.org - reposted with permission.