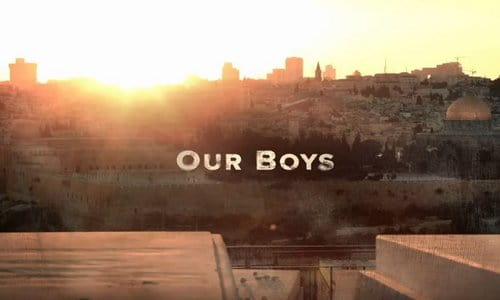 By Adam Eliyahu Berkowitz/Breaking Israel News August 23, 2019
Share this article:
Many viewers were excited when the HBO ten-episode series "Our Boys" was announced, anticipating a docudrama covering the horrific murder of three young Israelis in 2014. The murders were traumatic for the entire nation and were one of the factors that led to Operation Protective Edge IDF incursion into Gaza.
A movie about the incident and its aftermath would certainly be of intense interest to many. But what viewers got instead was what amounted to less than a passing glance at the murder of the three Jews and an intentionally politicized anti-Israel message that blames the Jews for Palestinian terrorism.

The Real Story
On 12 June 2014, three Israeli teenagers (Eyal Yifrach age 16, Gilad Shaar age 16, and Naftali Fraenkel age 19) were hitchhiking at Alon Shvut in Gush Etzion. Palestinians stopped and forced them into their car. Gilad Shaer called a police emergency hotline to report the kidnapping, managing to whisper,  "They kidnapped me."
The taped call also recorded shouting in Arabic from the kidnappers and several volleys of automatic gunfire. A massive search for the boys named Operation Brother's Keeper was launched. On 30 June, search teams found the bodies of the three missing teenagers in a field north-west of Hebron. They had apparently been shot dead shortly after the abduction.
The Title of the Movie is a Lie
The title of the movie, "Our Boys", implies that the movie focuses on the story of the three boys but it emphatically does not. Instead, the movie moves quickly through the part of the story that takes place after the bodies of the Jewish boys are found and focuses on the murder of Mohammed Abu Khdeir, a 16-year-old Palestinian who was murdered by three Orthodox Jews three days after the Jewish victims were buried.
Perhaps these three Jewish murderers are what the title was referring to when it said "Our Boys," as if they truly represent Jewish society. Such a premise would truly be a new, Hollywood style, blood libel that challenges the limits of even the most creative directors who are motivated by anything less than a deep hatred for Jews.
In the movie as in real life, the Jewish perpetrators admitted that they had killed Abu Khdeir in an act of revenge for the murder of the three Jewish boys. The two minors involved were found guilty of Khdeirs' murder and were respectively sentenced to life and 21 years imprisonment. A third Jewish man, not a minor, was sentenced to life in prison and an additional 20 years.
Despite its title, the movie begins after the murder of the three Jewish boys. The movie focuses on the murder of Abu Khdeir, the ensuing investigation, the political aftermath, and the effects on his family and community.
It may seem strange but the movie titled 'Our Boys' entirely ignores the three bodies lying under the tarpaulin on the ground. None of these aspects of the murders of the Jewish boys are mentioned in the HBO movie. None of the families of the Jewish victims were consulted and they refused to comment on the movie.
Instead, the movie focuses, albeit briefly, on the anger felt in Israel in the wake of the murders. The brevity of this focus on the Jewish perspective may have been so that the audience would be horrified at the emotion without taking the time to ask if the anger might have been justified or even a moral requisite.

Jewish "Settlers" Portrayed as Neo-Nazis
It may sound incredible to the non-Israeli that the murder of three young boys could lead to the demonization of Jews but this message is precisely what came through. A review in YNet described a scene in which a "settler" teen was interrogated by the division of the Shin Bet (the internal security service also known as Shabak).
"American audiences will surely recognize similarities, especially at these tense times, to the violent, fascist energies promoted by white supremacist organizations," YNet wrote. "Like in the recent El Paso mass-shooting, that was committed by a motivated young man, inspired by racist sentiments - the horrifying murder of Mohamed Abu Khdeir was committed by a young man fueled by the heated public discourse."
"'Our Boys' depicts Israeli society as a violent, zealous and racist society," YNet wrote, asserting that the depiction is accurate and all-encompassing. "The show's content is problematic for Israel's international image, but 'Our Boys' is not propaganda. It doesn't tell lies to raise morale - but boldly strives for complexity and honesty."
Israelis Enraged and Hurt by the Portrayal
A petition signed by 120 families of victims of Palestinian terrorism was sent to HBO, requesting the series relate to the Jewish side of the story in some way. They requested that the HBO make it clear that Palestinian terrorism is far more prevalent than Jewish terrorism.
"The kidnapping and murder of the Jewish teenagers was only one of a series of similar events. The Palestinian murderers receive support from the public and are hailed as heroes. Conversely, the murder of the Palestinian teenager was met with shock, and was condemned by Israeli society." the families wrote in the letter they sent to HBO.
"Every year, dozens of Jews are murdered due to the ongoing incitement of the PA. The Arab 'street' doesn't condemn the murder of Jews; it supports and reinforces it," they added.
A section of the letter was written by Merav Hajaj whose daughter, Shir, was murdered by a Palestinian in 2017 who ran his truck through a crowd of IDF cadets in Jerusalem.
"After my daughter and three other officers were murdered by terrorists, the people in their [Palestinian] neighborhoods handed out candy and celebrated. This repeatedly happens, after every terror attack," she said.
This celebration of Jewish blood was not an anomaly and was repeated last week after 19-year-old Dvir Sorek was murdered near where the three boys were first kidnapped.
"The State of Israel acted with determination to catch and punish Abu Khdeir's murderers," Hajaj wrote. "In contrast, the Palestinian Authority rewards and glorifies the murderers of Jews. In camps and in schools, they praise [them] and teach them to follow in their path."
HBO declined the families' request in a statement saying that it was their policy to broadcast the program exactly as it was prepared by the creative team.
"We suggest you watch the series in its entirety and judge it in its full context. We are confident you will understand our position," the network said.

Review of the Movie
Tzvi Fishman, a prize-winning author and graduate of the New York University School of Film and Television, reviewed the movie after watching the two installments that are currently available. His review can be read below.
"The main message of the movie was that the Palestinians in Israel are exploited people," Fishman told Breaking Israel News. "They live under the bootheels of the Israelis and have no chance at equality. The movie portrays them as third-class citizens in the eyes of the authorities and police."
"The parts portraying the three Jewish boys were done in a cold and clinical manner showing TV footage that doesn't allow you to connect to them in any emotional way. They are never seen on screen. The only time any of the mothers were portrayed was when one was seen speaking at a large demonstration. This was entirely unlike the Arabs who were portrayed by emotional actors. The Israelis were portrayed as cold, almost fascist."
"They were trying to sanitize the Israeli side and portray us as 'occupiers," Fishman said. "In the movie, it was made clear that the Israelis were responsible for the violence and the lack of peace, even the aggression from the Arab side which was portrayed solely as victims."
Ironically, an anti-Israel bias is prevalent in the world of Israeli arts.
"Israeli arts are dominated by the left side of the political spectrum, secular, almost anti-Zionist, who are against the Jewish character of the state of Israel," Fishman sad. "This is a long tradition begun in the early days of the state when money for the arts would go through committees that were controlled by the left. This bias is written into their bylaws."
"There have been many many movies made in Israel made portraying the Arabs as victims and the Israelis as aggressors. When you make a book or movie, the artist can be very manipulative. By not showing the attack on the three boys, the director made sure there could be no anger against the Arabs."
"They claim there are no artists on the right but that is clearly not true," Fishman said, noting that he has applied for countless government endowments over the course of many years and has never received any money for his efforts.
Fishman is religiously observant and prefers to be identified as right-wing. Despite being rejected (or ignored) by the Israeli artistic establishment,  Fishman has sold four originals screenplays. He has also self-published 20 books. He is the recipient of the Israel Ministry of Education Award for Creativity and Jewish Culture.
"The government money is not available to anyone on the right in the political spectrum. Especially if you are making a movie or writing a book that portrays 'settlers' or religious Jews in a positive light. The people who make the decisions have a leftist point of view which means they are only liberal and pluralistic if you share their views."
"This is frustrating for an Israeli artist who believes in God and believes in settling the land of Israel or the Zionist dream."
Originally published at Breaking Israel News - reposted with permission.