The Censorship Of Alternative Media Is Virtual Book Burning 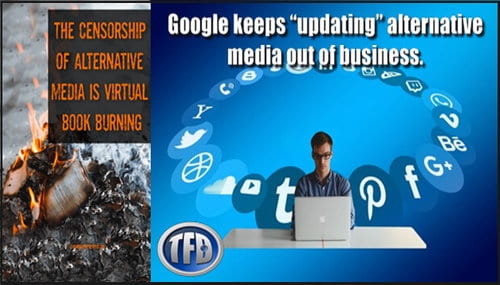 By Daisy Luther/Organic Prepper August 23, 2019
Share this article:
Recent discussions about an executive order that would "help protect" conservatives from bias on social media have brought a bone of contention to the forefront. Are alternative and conservative media actually being censored or are non-mainstream journalists and bloggers just whining?
As the owner of a website that is demonstrably facing censorship, I can tell you that from my point of view, we Americans are currently in the midst of a virtual "book burning" akin to the ones we look back on in shame.

The history of book burning
As early as 221 BC in China, the burning of books has always foreshadowed a crackdown on dissent and information. It's probably no surprise that Adolph Hitler ordered the burning of "subversive" books in Nazi Germany, and the McCarthy era brought public burnings of any book that could be - if one's imagination was stretched to the absolute limit - related to communism.  There are many cases of modern-day book burning, and it generally links to opposing views, either religious, social, or political.
In the past, torching texts was a tactic used by conquerors to wipe the slate of history clean. In 213 B.C., China's Emperor Shih Huang Ti thought that if he burned all the documents in his kingdom, history would begin with him. (He went as far as burying alive those scholars who continued to teach old ideas.)
Eight centuries later, legend says, Caliph Omar burned some 200,000 objectionable books belonging to the library of Alexandria, warming the city's baths for six months.
When the Mongols sacked Baghdad in 1258, the waters of the Tigris were said to have run black with ink from all the destroyed books.
In 1492, after the Spanish conquered Granada, the last Muslim kingdom in Western Europe, they allegedly emptied many of the city's treasured libraries and set their contents all to flame.
Then there are those who have burned books to silence opposing views.
Catholics torched the writings of Protestant reformer Martin Luther.
The Nazis lit a towering bonfire of books by Jewish and leftist writers such as Franz Kafka, Sigmund Freud and Upton Sinclair.
And many 1950s Americans, spurred by Senator Joseph McCarthy, hunted for procommunism books to burn.
Nothing like a handy memory hole, right?
These days, as more and more people turn to the Internet for essays and news, dissenting views are more often found online than in paperback. And there are people in power who want this to stop because particularly after the last election, they've seen the power the Internet has to change the entire course of a country.
Big Tech and Big Media hold most of the microphones and they like it that way. They tend to be united politically and they've been busily working toward silencing opposing views on the Internet, branding them as "dangerous" or "ignorant." Members of the alternative media, writers of alternative health news, and opinion bloggers are being censored at a rapid clip.
How is silencing opposing views on the Internet any different than burning a library filled with inconvenient information?
First, we need to define modern censorship.
Opposing views on the Internet can be silenced in a number of ways. Keep in mind you don't have to like the examples I provide here. If they came for these people or websites, they can come for your favorites next until all we have left is a government-controlled media. This has happened in China and Venezuela, just to name a couple of places.
Some of the ways our virtual books are being burned are deplatforming (when people can no longer publicly express their opinions), being hidden by search engines (when readers can no longer find the information), and financial starvation (when site owners can no longer afford to keep running the website or pay writers and researchers.)

Fake News
The new catchphrase to brush of any web content you don't like is "fake news."
While some information out there is decidedly slanted, other information that is called "fake news" is just stuff the reader, search engine, or social media outlet doesn't like. It has become commonplace to call any outlet with which you disagree "fake news."
Facebook has rolled out its own Ministry of Truth a la Orwell by having their "fact-checkers" go through posts and add an article from a site they like better to inform readers about the veracity of the article. Trouble is, the fact checks come from decidedly political outlets but are presented as the unbiased truth.
Of course, if your website is branded "fake news" then you are on the road to Silenceville in any of the multitudes of ways discussed above.
So how is this like book burning?
Back to my main thesis now, this purge of alternative points of view is nothing less than virtual book burning. If content creators are discredited, financially starved, and hidden from view, we'll soon only have one point of view available. It will be that of the people who hold all the microphones, the people who control all the platforms.
Sure, we will still have our loyal friends and readers, but we will lose the ability to reach other people. And even if those other people come looking for the information we provide, they won't be able to find us. Libraries and libraries of alternative content will be online but the doors will be chained shut by search engines and social media outlets.
Other pieces of information - information that is critical of the government or the politically correct cause of the day - will be completely destroyed, removed from the Internet, removed from Amazon, and turned into virtual ash.
Maybe because the purveyor couldn't afford to keep it online because he or she was starved out of business. Maybe because the decision-makers of what we're allowed to see decided we weren't allowed to see that.
Decisions are made based on the information available to people. When that information is limited, so too are our choices.
You may think it's fine when it's the work of people you consider "extreme" being burned.
A lot of people reading this probably think that I'm nuts, defending extremists and people who may not be very nice. But, if you look closely, you'll see I'm not defending those people or their points of view. I'm defending the right to express what one believes, regardless of how heinous I may find their opinions.
We've all read this quote by Martin Niemöller, a prominent Lutheran pastor during the days of Nazi Germany.
First they came for the socialists, and I did not speak out--because I was not a socialist.
Then they came for the trade unionists, and I did not speak out-- because I was not a trade unionist.
Then they came for the Jews, and I did not speak out--because I was not a Jew.
Then they came for me--and there was no one left to speak for me.
The thing that many people don't realize is that Niemöller was originally pro-Third Reich and enthusiastically embraced the teachings of Adolph Hitler. But then in 1934, he met Hitler and discovered his own telephone had been tapped by the Gestapo. He suddenly saw that he had been complicit through his support in what had become a maniacal dictatorship and ethnic cleansing and from that day forth, vehemently opposed Hitler.
You see, everything changed when he got more information.
It changed when he learned the truth about what was espoused by the Reich Ministry of Public Enlightenment and Propaganda, the only news available at that time in Nazi Germany. It changed when he learned things that the government kept hidden.
Those people cheering the fall of Alex Jones, Mike Adams, the "Alt-Right," and any other politically incorrect information will be very surprised when they are targeted next. They'll be shocked when their writings are destroyed and their websites are hidden.
That's how the slippery slope of censorship works. It's fine when it happens to the crazy people or those with whom you disagree.
But it's going to be a shock when your own books are thrown on a bonfire because the needle of what the government or Big Tech deems acceptable has moved.
Originally published at The Organic Prepper - reposted with permission.