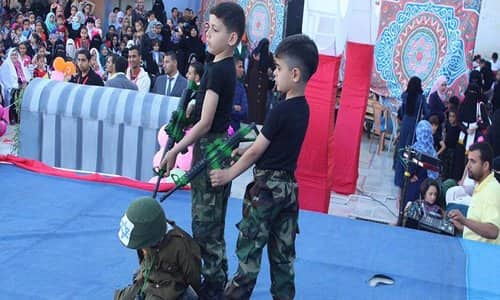 By Benjamin Kerstein/Algemeiner.com September 10, 2019
Share this article:
A study has found that new Palestinian educational materials to be used during the 2019-2020 school year have, despite considerable international criticism, become even more ridden with anti-Israel and sometimes antisemitic propaganda.
According to the group IMPACT-se, which evaluated the materials according to the standards of the UN cultural body UNESCO, the materials contain "a systematic insertion of violence, martyrdom and jihad across all grades and subjects."

The materials "indoctrinate for death and martyrdom, utilizing a variety of tools to convince children to risk their lives as martyrs," the group noted.
"Throughout the textbooks for all grades, the need for continuous struggle is stressed -- using terminology like revolution, uprising, ribat and jihad, not only as part of a national struggle but also as a way of teaching and invoking extremist religious beliefs as a central goal of this curriculum," IMPACT-se stated.
This is done in "a more extensive and sophisticated manner" than in the past, and extends into such subjects as the hard sciences, it added.
In one mathematics textbook, for example, a question reads, "The number of martyrs of the First Intifada (the Intifada of Rocks) is 2026 martyrs, and the number of martyrs of the Al-Aqsa Intifada is 5,050. The number of martyrs in the two intifadas is _________ martyrs."
Another textbook celebrates terrorism by eulogizing Dalal al-Mughrabi, who participated in the 1978 Coastal Road Massacre that killed 38 Israeli Jews, 13 of them children.
"Our Palestinian history is brimming with names of martyrs who have given their lives to the homeland, including the martyr Dalal al-Mughrabi," says the textbook. "Her struggle portrays challenge and heroism, making her memory immortal in our hearts and minds. The text in our hands speaks about one side of her struggle."
In another case, the 1972 Munich Olympics massacre is hailed as the "Munich operation."
The textbooks also emphasize death, violence,and holy war, with one saying, "Giving one's life [fida'], sacrifice, fight, jihad, and struggle are the most important meanings of life."
"Describe the rewards awaiting the jihad fighter and the martyr in the way of Allah," says another textbook.

In addition, IMPACT-se pointed out, "The possibility of peace with Israel is rejected. Legitimacy of any historical Jewish presence in what is today Israel and the Palestinian Authority or of the current Jewish presence in Israel, is entirely absent from the curriculum."
This goes so far as to erase previous negotiations and peace agreements with the Palestinians from history lessons, and the elimination or delegitimization of any Jewish historical presence in the Land of Israel.
One text says, for example, "The Zionist occupation changed the name 'Al-Buraq Wall' into 'the Wailing Wall.'"
"We will point to the motives leading the Zionist gangs to perpetrate genocide and forced displacement of our people in 1948," another textbook says.
"The Zionists established their entity based on terrorism, annihilation and colonialism," says another.
Antisemitic dehumanization is also a constant, said IMPACT-se, as, "Texts systematically characterize all things Israeli as nefarious. Abusive expressions are utilized in describing Israel and Jews. The Jewish/Israeli 'other' is presented though undertones of alienation and threat."
"Jews are maligned from the political rivalry with the Prophet of Islam," the group highlighted. "No objective information is provided about Israel and Jews that would serve to counterbalance the viewpoints of malleable Palestinian students. In short, there is no education for coexistence."
The texts also emphasize that the entirety of the Land of Israel belongs to the Palestinians, and will eventually return to Arab domination.
"We have learned: Palestine is the geographical area that extends from the Mediterranean Sea in the west, to the Jordan River in the East, and from Lebanon and Syria in the north to the Gulf of Aqaba and Egypt in the south, an area of approximately 27,000 km2," one book says.

IMPACT-se said, "Derogatory Names are Pervasive: 93.5 percent of the 1,509 references to Israel in the curriculum do not refer to Israel by name, but use pejorative nomenclature including: 'Zionist Occupation'; 'The Occupation'; 'Israeli Occupation'; 'The Zionists'; and 'The Zionist Entity.' Israel's straightforward name is featured only in 6.5 percent of the cases."
IMPACT-se CEO Marcus Sheff said of the study, "Another school year has come around and 1.3 million Palestinian school children are still being radicalized every day by the Palestinian Ministry of Education. It is hard to fathom that this extremist schooling is being funded by donor countries."
"The United Nations has just told the PA this August to remove antisemitism in the textbooks following our presentation to them," he added. "The European Parliament passed legislation stating its disapproval of the curriculum last year; government officials, ministers, and diplomats have presented our findings to the Palestinian Minister of Education and received all manner of assurances."
"But this week, the school gates opened and the same hateful textbooks are being taught," Sheff said.
"Look at the numbers: for grades 2-12, all textbooks -- one hundred percent of social studies, history, Arabic language, and national education textbooks contain problematic content," he asserted.
"That is a strategic choice made by the Palestinian Ministry of Education to radicalize whole generations of young Palestinians, to encourage them to commit violence, endanger themselves, and to reject peace with Israel," Sheff concluded.
Originally published at Algemeiner.com - reposted with permission.