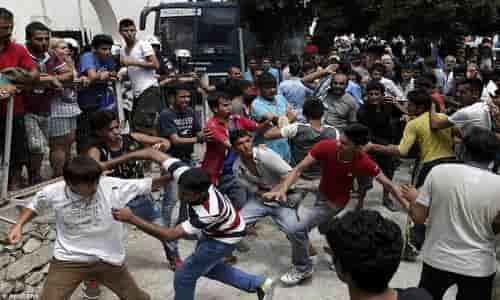 By Soeren Kern/Gatestone Institute May 23, 2016
Share this article:
Thousands of Christians in German refugee shelters are being persecuted by Muslims, sometimes even by their security guards, according to a new report, which asserts that in most cases German authorities have done nothing to protect the victims.

According to Open Doors:
"It is alarming that Christian refugees and other religious minorities increasingly are facing the same persecution and discrimination as in their Muslim countries of origin, and not even in Germany can they get the expected protection.
"Despite increased reports about this problem by the media, charities, human rights organizations, church leaders and Christian organizations, German authorities and politicians have hardly ever launched an investigation. Instead, we believe that incidents are deliberately downplayed and even covered up.
During confidential discussions with researchers from Open Doors, it has become known that even in police stations, religiously motivated attacks on Christian refugees are not documented as such."
"As a result, many cases of sectarian violence are not statistically recognized and are not classified correctly in terms of their severity and frequency. This means that a large number of religious-related human rights violations against Christians and other religious minorities are treated as irrelevant.
The report concludes with a number of recommendations for the German government to help ease the burden on Christian refugees:
The religious affiliation all migrants should be recorded at the very beginning of the process of registering refugees and that data should be forwarded throughout the process of assigning refugees to accommodations.
Religious minorities should be pooled so that the percentage of Christians and other religious minorities in relation to Muslims in refugee shelters is approximately equal.
Christians and other religious minorities who are victims of persecution and discrimination should be separately accommodated.
The non-Muslim component within the ranks of the security personnel should be increased.
Employees and the security staff in refugee shelters should receive regular sensitivity training regarding the causes of religious conflict and the protection of religious minorities.
Persecuted Christians should be provided with a list of the names of other Christians to whom they can call upon for help.
Some institutions close to the German government openly dispute Open Doors's assertions and have provided political cover for the authorities to do nothing to help persecuted Christians.
In March 2016, the Konrad Adenauer Stiftung (KAS), a center-right think tank that is independent of, but closely tied to Angela Merkel's Christian Democrats, published an analysis entitled, "Christians under Pressure?" (Christen unter Druck?). The report argues that Muslim persecution of Christians in Germany and elsewhere in the world is being exaggerated and in any case cannot be proven:
"In the world context, as in Germany, reliable information on attacks against Christians is difficult to obtain. Reports are mostly subjective and empirically not seriously provable...
"There are probably a number of different reasons for the violence in the refugee shelters: A large number of people are living together for a long time in a confined space without privacy and in stressed conditions.
Psychology may also be a contributing factor: worries about the future, language and cultural barriers and the processing of recent memories of flight from their home country. As if this were not already stressful enough, there are situations in which persecutors and persecuted in their countries of origin meet up again at refugee shelters in Germany.
"In addition to sectarian clashes, ethnically motivated conflict situations, for example, repeated clashes between Afghans and Iraqis. Striking is also the large numbers of conflicts involving converted Christian refugees. Only very little is known about hostility against Arab Christians who were already Christians in their country of origin."
The KAS report advises against separating refugees according to their religious affiliation because it would "send the wrong signal" to newcomers regarding Germany's commitment to religious liberty: "In Germany there are no cultural or religious exceptions to our understanding of civil liberties... Germany guarantees the freedom of religion... In Germany there is no reason for a person to feel they need to conceal their religious affiliation or that they are not able to convert to another religion."
The KAS report does not offer any recommendations for eradicating the sectarian violence in German refugee shelters.
At a press conference marking the release of the Open Doors report, Volker Baumann, director of a group called Action for Persecuted Christians and the Needy (AVC), said that up 40,000 refugees in German shelters are being persecuted due to their religious beliefs.
According to Gottfried Martens, the pastor from Berlin, the German government has lost control over the situation. In an interview with Frankfurter Allgemeine Zeitung, he said that most Christians who are being persecuted in German shelters dare not file a formal complaint due to fears for their own safety.
In those cases where complaints are filed, Muslims file counter-complaints. Moreover, it is hardly ever possible irrefutably to prove incidents of harassment. Thus the vast majority of refugees decide not to complain in order not to aggravate their situation.
Thomas Müller, an analyst with Open Doors Deutschland, concluded:
"Christian refugees from many different countries are trying and failing to find safety in Europe and it is likely that the report only shows the tip of the iceberg. It is clear that many Christian refugees  especially those who are converts to the Christian faith  live in fear of persecution from Muslim refugees who make up the majority of residents in the refugee hostels set up throughout Europe. It is sobering to hear persecuted Christians telling a Western country that they recognize the very same persecution patterns in operation as in their home countries."
Originally published at Gatestone Institute - reposted with permission.