What Does Bolton's Exit Mean For U.S. Policy On Israel & Iran? 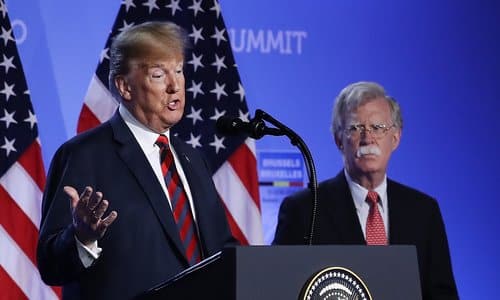 Bolton's exit comes at a time when the administration is preparing to release its long-awaited Middle East peace plan to respond to the Israeli-Palestinian conflict, as well as possible negotiations with Iran.
Trump said on Monday that he was open to meeting with Iranian President Hassan Rouhani, which wasn't the first time he has invited talks with Tehran.
"It could happen," he told reporters outside the White House. "No problem with meeting. Iran should straighten out because frankly, they're in a very bad position," he added.
Ilan Berman, senior vice president of the American Foreign Policy Council, said that Trump's neo-isolationist views and purported desire to strike diplomatic deals with long-time foes such as North Korea and Iran are at odds with the maximalist positions of Bolton, a veteran of the George W. Bush administration.
"Bolton's ouster as national security advisor shouldn't come as a complete surprise. After all, it has been clear for some time that his long-held attitudes on issues like North Korea and Iran are at odds with the president's preferred approach to these same matters," Berman told JNS.
"This is particularly true in the case of Iran--the Trump administration has steadily gravitated toward the idea of re-engaging Tehran in negotiations [though ostensibly more harshly than was done under Obama]," he continued. "Bolton has long been an advocate of isolating the Iranian regime, and it's reasonable to assume that he was not a proponent of renewed talks with Tehran. His departure, in turn, eliminates at least one institutional roadblock to such dialogue on the U.S. side."

Despite Trump repeatedly saying of late that he would meet with the Iranians, Rouhani has rejected his overtures, insisting that he would only meet with the United States if it lifts sanctions, which the Trump administration reimposed after withdrawing from the 2015 nuclear deal, in addition to enacting new financial penalties against the regime.
'Not the time to take foot off the gas'
Bolton's exit also comes a week after special U.S. envoy to the Middle East Jason Greenblatt announced his upcoming resignation. Greenblatt had been heavily involved in formulating the administration's peace plan, along with the president's son-in-law and senior adviser Jared Kushner.
Bolton is a well-known figure in pro-Israel circles and seemed to enjoy a strong relationship with Israeli Prime Minister Benjamin Netanyahu, who shared his hardline views on Iran. Netanyahu hosted Bolton, as well as his Russian national security counterpart, at a major trilateral summit in Jerusalem last June, and Bolton toured the region personally with Netanyahu.
Given the two major departures of pro-Israel figures, questions remain as to the direction of the administration.
As Bolton's departure pertains to the U.S.-Israel relationship, Security Studies Group senior fellow Matt Brodsky told JNS that "there are obviously many aspects" to the alliance and "how it will be impacted by Bolton's exit depends on the specific area of policy we're discussing."
Brodsky mentioned that he reached out to the White House team dealing with the Israeli-Palestinian peace process following Bolton's forced resignation. An administration official told him, "There is no change in United States policy at this time. We will release our 'Vision for Peace' after the Israeli election and work to determine the best path forward to bring long-sought security, opportunity and stability to the region."
The peace team, explained Brodsky, has been more insulated from the daily machinations of the wider National Security Council, which the national security advisor leads.
Regarding Iran, Brodsky said that "it is too early to gauge the impact. I thought Bolton was a terrific choice for national security advisor because he saw the world for how it was--not how he wished it would be. He helped lead the effort to apply more pressure on Iran, and frankly, his policies were working.

He recognized that now was not the time for the administration to take its foot off of the gas. To the extent anyone takes his place and removes pressure from Iran, it will be bad for Israel."
"Israel's security establishment has been concerned about what talks would like look between President Trump and Iranian President Rouhani," he added. "Would it turn into something resembling the relationship between the president and North Korea's Kim Jong-un? Would it be based on substance or optics? If Israel had to act on its own, I'd imagine they would feel better having a clear-eyed hawk like Bolton at the president's side."
Moreover, he said, "it would be a very problematic to have an isolationist serve in the role of national security advisor. There are often times when America's adversaries don't care about what the U.S. wants; they care about what they want, and they'll wage war whether we want it or not. We need someone clear-eyed about the threats facing the U.S., and there are many."
Brodsky emphasized that "President Trump's love for Israel appears to be a kishka issue that he feels deeply inside. So I don't imagine his love for Israel and its people will diminish with Bolton's departure. But how that love is demonstrated on a strategic and tactical, day-to-day basis may shift with new ideas from a new national security advisor."
Middle East Forum president Daniel Pipes echoed Brodsky: "I doubt that Bolton's leaving has major implications for the U.S.-Israel relationship, which seems to be primarily under the influence of  Jared Kushner. A more isolationist national security advisor seems likely, someone more in keeping with Trump's views."
"A national security advisor whose advice is followed would lead to a less assertive policy vis-à-vis both Iran and Israel," added Pipes. "We'd become a bit more like the Europeans or [former U.S. President Barack] Obama: the default policy."
Trump, in his announcement on Twitter of Bolton's exit, said that he would soon name what will be his fourth national security advisor as early as next week.
Originally published at JNS.org - reposted with permission.