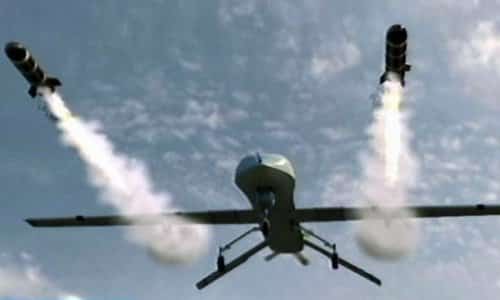 By PNW Staff May 23, 2016
Share this article:
The power of drones was again demonstrated on Saturday after a US drone targeted and killed the leader of the Taliban in Afghanistan.  How likely is it that Islamic militants will also seek to use similar technology for their own purposes?

It doesn't seem that long ago that drones were regarded as being incredibly high-tech, and prohibitively expensive. That's no longer the case. Hobbyists race drones against one another through obstacle courses, companies are developing drone delivery services, we're using them to collect geographical data. Yesterday's shiny new gadget is today's affordable toy.
Drones are the sort of technology that we talk about "falling into the wrong hands," and many experts are saying that a terrorist attack utilizing drones is only a matter of time.
The technology is becoming more affordable, more accessible, and more flexible. The question is not so much how a terrorist might utilize a drone in an attack, but why they haven't done so yet.
Peace building organization PAX and ARES suggested that the appeal of drones for armed forces has to do with the affordability and portability of a drone system.
The cheapest models of hobby drones are capable of running recon missions, while higher grade models are an obvious choice for delivery and, potentially, explosives. A hobby-grade drone with an explosive attached is effectively a guided missile.
In Williamsport, Pennsylvania, a mock attack was conducted during the Little League World Series in order to gain some valuable intel on how a terrorist attack might play out.
The drill used two drones to simulate a chemical attack, seeing fans rushing to the exits in order to test how civilians and emergency responders alike might handle such an attack.
A report coming from the Oxford Research Group's Remote Control Project titled The Hostile Use of Drones by Non-State Actors Against British Targets suggests that drones will be used as a "simple, affordable" airborne means of delivering explosives on targets.
We've yet to see a large scale, successful drone attack by a non-state actor, but the potential is there for even the less well-funded groups to create a major ripple effect with strategic attacks. It's not difficult to imagine a group using a few small drones to poison crops or jam radio signals.
A suggested solution would be to classify drones in a manner similar to how we currently classify firearms.
As the line between military and hobbyist grade drones blurs, waiting periods and background checks may be enormously helpful in ensuring that criminals and domestic terrorists have a difficult time obtaining drones for use in attacks. GPS tracking and possibly override systems may also be of use in thwarting would-be terrorists.
We have seen a number of unauthorized drone flights that hint at what a hostile group might be able to do with a drone.
An anti-nuclear activist in Japan landed a drone containing radioactive sand on the prime minister's office early last year, an Albanian activist disrupted a football match against Serbia by flying the Albanian flag over the game, and Hezbollah violated Israeli airspace with drones.

Although the explosives carried by a single consumer-grade drone might not seem capable of doing that much damage, drones have been shown to be able to fly in formation, with one pilot leading a fleet of dozens, even hundreds of networked drones. In theory, a single person could launch an attack as destructive as a US missile strike.
In all likelihood, terrorist groups have already been hard at work training their foot soldiers in the operation of drones, how and where to obtain them, how to equip them for hostile acts, and how to pilot them as such to limit the risk of detection before the attack can be successfully completed.
In short: the first major terrorist attack utilizing drones is probably already in the development stages.
To put greater emphasis on background checks and so on right now will help to stop further drones from being put out into the wrong hands, but there are already thousands of consumer-grade drones going from owner-to-owner, without any sort of paper trail.
To wipe out every consumer grade drone on the face of the Earth right now would not stop terrorists from 3D printing the parts to create their own. Furthermore, a black market in drones is certain to develop, just as it now exists for other weaponry. This reality, alone, makes the idea of waiting periods and background checks almost laughable.
Simply put: Terrorists will be using drones in future attacks, and there isn't any way to stop that. However, through preparation, this risk may be manageable.
By training emergency responders, law enforcement and military professionals in how properly to address this threat, drones need not be a major advantage for hostile non-state groups of militant extremists.