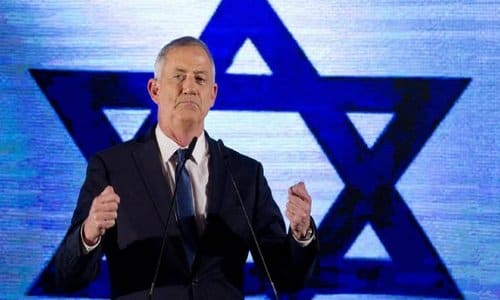 By Jonathan Tobin/JNS.org September 20, 2019
Share this article:
The results from Israel's second attempt at electing a government in 2019 are like a jigsaw puzzle whose pieces don't fit. There's no getting around the fact that Prime Minister Benjamin Netanyahu was the big loser. But it's also true that Blue and White Party leader Benny Gantz didn't exactly win either.
Though the Blue and White Party is now the largest and leads Likud by two Knesset seats, the parties that will recommend Gantz for prime minister still fall short of a majority, even if the Arab ones are included in the total.
In order for Israel to get a unity government and avoid a third election within a year--an unthinkable disaster that would probably produce an even more dismal result for Netanyahu if he tries to go that route--Blue and White is going to have to go back on its promise not to join a coalition with Netanyahu.

Alternately, the Likud members of Knesset would have to abandon their pledge not to dump the prime minister. Other scenarios involving the haredi parties joining forces with their secular foes or choosing to govern with anti-Zionist Arab parties remain equally implausible.
But let's assume for the sake of argument that by some feat of political magic--or further misjudgments and hubris on the part of Netanyahu that brought the Jewish state all these months of chaos--Gantz does find a way to get the 61 votes that will enable him to govern.
If so, we can be sure that such a turn of events will be greeted with hosannas by the international media and Israel's American critics, both Jewish and non-Jewish. Few figures on the world stage have been as thoroughly demonized as Netanyahu.
Virtually any successor to him will be acclaimed as an upgrade by those who have unfairly tried to blame the prime minister for the lack of peace in the Middle East, as well as for declining support for Israel among Democrats and young American Jews.
While Gantz may not become the next prime minister, it's worth asking whether or not he can do much to improve Israel's image among those who think that Netanyahu is the problem.
Any successor will start out with a huge advantage. The international press and American liberals have put so much effort into depicting Netanyahu as a hardliner opposed to peace that the next prime minister will have something of a honeymoon abroad. But Gantz is certain to eventually disappoint the Bibi-haters.

Gantz will get credit for appearing to be more moderate, yet on the issues that actually animate Israel's liberal and leftist critics, the former general isn't likely to lead much differently than Netanyahu.
The reason is fairly obvious to anyone who actually paid attention to the two election campaigns that were just fought. Rather than trying to present an alternative to Netanyahu's policies, Gantz spent much of his time trying to sound as if he is more of a hardliner than the prime minister himself.
Instead of denouncing Netanyahu's announcement about holding onto the Jordan Valley and never surrendering Jewish settlements--a move that infuriated American liberals and set off the usual round of jeremiads about the end of the peace process--Gantz's reaction was to claim that the Likud head was mimicking his stands on the issue.
The same goes for the prospect of another war with Hamas in Gaza. Rather than joining in criticisms of Netanyahu for being too tough, Gantz was the one issuing threats of destruction and calling his rival soft on terror.
The threat of war may actually be higher under Gantz since he may not be as cautious about the use of force and, like Netanyahu's predecessor Ehud Olmert, who blundered into a costly conflict with Hezbollah, may think he has something to prove to Israel's enemies.
Why would the "anti-Netanyahu" that so many hope will breathe life into the peace process take such stands?
The answer is that Gantz knew that challenging Netanyahu on security from the left was a recipe for defeat. The sole rationale for his party's existence is to oust Netanyahu, not to make nice with the Palestinians.
The same is true about relations with President Donald Trump. Netanyahu's contentious relationship with President Barack Obama and his warm embrace of Trump is a particular bone of contention for Democrats. But expect Gantz to be every bit as grateful to Trump, who is immensely popular in Israel, as Netanyahu has been.

Nor will a future Democratic president--should Trump be defeated next year--find Gantz to be any more willing to abandon the West Bank or divide Jerusalem than Netanyahu has been. The political success of the former Israel Defense Forces' chief of staff rests on his being part of a broad consensus that believes there is no Palestinian peace partner. Democrats will have to accept that even an Israel led by Gantz will refuse to trade land for terror.
As for American Jewish resentment about the lack of religious pluralism in Israel, that will depend on the composition of the next coalition. Should the religious parties wind up outside the government, plans for expanding the egalitarian prayer area at the Western Wall will be reinstated, no matter if Netanyahu or Gantz stands at the helm. But should the new coalition include those religious parties, you can bet that the scheme will remain on hold.
Just as important, Gantz will be no more acceptable to the growing ranks of anti-Zionists in the left wing of the Democratic Party than Netanyahu. For BDS supporters, Gantz is just another criminal Zionist. If left-wingers like Reps. Ilhan Omar (D-Minn.) and Rashida Tlaib (D-Mich.) represent the future of the Democratic Party, it won't make any difference who is prime minister of Israel.
The gap between Israelis and Americans on these issues has always been bigger than one leader. Israel's critics may pretend that Netanyahu is the primary obstacle to peace as opposed to the Palestinians, but it won't take long for them to be hurling the same sort of accusations at Gantz if he gets the top job.
Originally published at JNS.org - reposted with permission.