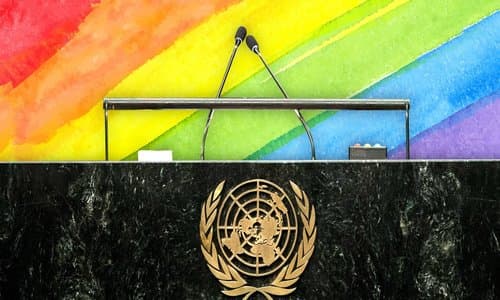 By Jonathon Van Maren/Bridgehead.ca September 27, 2019
Share this article:
Those of you who follow my weekly podcast over at LifeSiteNews will know that Austin Ruse of C-Fam is, hands-down, one of the most effective advocates for life and family on the international level.
While most of us ignore what is going on at the United Nations, Ruse made the compelling point during our interview that eventually, what gets decided at the top trickles down--and that activists with no elected power can actually effect an incredible amount of change without anyone ever hearing their names in the news or on the radio.
LGBT activists and abortion activists have been consistently making use of these opportunities, and Ruse and a handful of his colleagues have been fighting back.

With that context in mind, C-Fam's latest report is very, very concerning:
A UN expert charged with promoting LGBT rights around the world called on governments to take action against religions that don't embrace LGBT rights. In his latest report to the General Assembly, Victor Madrigal-Borloz said, "States should adopt decisive action when religious authorities, leaders or agents infringe on the rights of LGBT persons through violence and discrimination, including hate speech."
Hate speech, as you know, is now a term that encompasses virtually everything that LGBT activists disagree with, including substantial portions of Holy Scripture and the religious texts of all three major monogamous religions.
"Born this way" is facing off with "ye must be born again" and our new progressive secularism is appalled that any person might be asked to refrain from any behavior by any religious tradition. And so religion must be suppressed in favor of the new rainbow dogmas--and censorship has a disturbing amount of support among Millennials. More:
In his report Madrigal-Borloz, the UN Independent Expert on protection against violence and discrimination based on sexual orientation and gender identity, equates any kind of religious or political narrative that does not endorse LGBT rights with incitement to violence. He calls on governments to respond forcefully.
"There is abundant information about the dissemination of expressions that constitute hate speech by representatives of churches and faith-based groups, and incitement often leads to actions that infringe on other rights, including the right to personal integrity," Madrigal-Borloz says in his report.

Madrigal-Borloz adds that "incitement and actual violence is enabled or carried out by religious leaders or agents in many ways. In some contexts, it is religion that is used as an explanation for the imposition of penalties that include the death penalty for homosexuality."
The report highlights only one case of what it characterizes as religious incitement to violence against individuals who identify as LGBT. An LGBT pride event was prevented from taking place in Tiblisi, Georgia in 2013 after the Orthodox Patriarch asked authorities to block it.
When the government would not cancel the event, thousands of protesters took to the streets to stop it. The UN report blames the Orthodox Church for the confrontations that ensued at that event, and that resulted in injuries to 17 people, including three police officers and two journalists.
Madrigal-Borloz's report also laments cultural expressions "that can lead to increased psychological distress for LGBT persons" like Jamaican dancehall music because it "often speaks of beating and shooting gay men" and "appears to play a role in promoting anti-gay violence."
The report's overall theme is social inclusion. It calls on states to adopt a panoply of laws and policies to prevent discrimination against individuals who identify as LGBT in a variety of contexts including education, health-care, humanitarian interventions, disabilities, and aging.
The report recommends including gender-neutral bathrooms in humanitarian camps. It recommends the adoption of "comprehensive sexuality education" that calls for kids to learn about masturbation and homosexuality.
The report also calls for the legal recognition of same-sex couples in contexts such as housing an employment. And it calls for reparations for past "pathologization, criminalization or any other stigmatizing processes."
The creation of Madrigal-Borloz's mandate three years ago resulted in a contentious vote in the General Assembly that nearly abolished it. "Sexual orientation" and "gender identity" have never been protected categories in international law. The establishment of the mandate is a stepping stone to make that a reality.

The mandate was renewed this summer for another three years despite another contentious vote. But resistance to the mandate has waned since 2016. It is unclear if the mandate will be challenged again in the General Assembly as it was three years ago when it was first created.
Now, obviously, there are many nations around the world that actually engage in genuine persecution against people who identify as LGBT. Iran is one prominent example, and there are thirteen countries where engaging in homosexual behavior is punishable by death, an appalling state of affairs (and one that almost always gets ignored at the UN in favor of more condemnations of the State of Israel.)
World leaders should absolutely be speaking up and condemning such behavior, and the Trump Administration has taken a firm stance on the global stage against such practices.
But LGBT activists want far more than a condemnation of genuine persecution, which, interestingly, is rarely brought up by activists in the West--in fact, they are more likely to side with Palestinian groups who despise them than they are with Israeli groups who support them (the Left's contradictions are both bewildering and never-ending.)
This is a very typical strategy on their part: Bring up legitimate persecution to appear reasonable, and then insert a host of poison pills that allow them to shut down their critics.
They specifically want Christian pastors and leaders to be silenced, Christian adoption agencies shut down, and Christians driven out of the public square.
They are using the UN to accomplish this goal, and we should be watching the work of Austin Ruse and C-Fam very carefully. Often, he is the only one pushing back against the tide.
Originally published at The Bridgehead - reposted with permission.