The Religion Of Climate Change & The New Doomsday Scenario 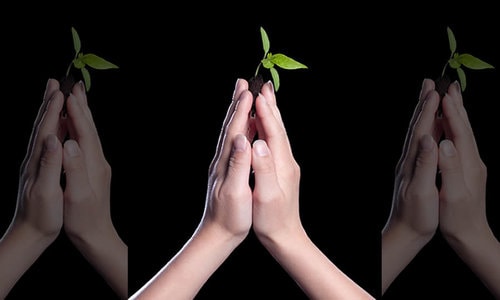 By Michael Brown/The Stream October 02, 2019
Share this article:
When I came to faith as a 16-year-old, drug-using, hippie rock drummer, I was told that Jesus was returning very soon. The end of the world was near. Very near.
Today, there is a new religious narrative, especially among young people, with a new "end of the world" scenario. But this one is depressing and grim, with nothing redemptive about it.
I'm talking about the new religion of man-made global warming.
It has its unique gods (like Mother Earth).
It deifies the created world (with seminarians confessing to plants in a chapel service).
It has its high priests and religious leaders (the climate change gurus and radical environmentalists).
It has its patron saints (like Sweden's Greta Thunberg).
And it has its own doomsday scenario: The end of the world is near. Very near.
According to a recent Rasmussen/HarrisX survey, 29 percent of all American voters believe it is "at least somewhat likely that the earth will become uninhabitable and humanity will be wiped out" in the next 15 years due to climate change.

"There is a dramatic difference by age on this question. Half (51%) of voters under 35 believe it is at least somewhat likely humanity will be wiped out in the next decade or so. Only 12% of senior citizens agree, and only 4% of senior citizens believe it is very likely," the survey said.
The survey revealed rural Americans do not share city-folks' concerns. Of those surveyed, 21 percent of urban voters believe that our world will soon become uninhabitable. Americans in the suburbs and rural areas are comparatively unconcerned: six percent of rural voters and five percent of suburbanites believe imminent doom is upon the world.
To be clear, I do not have the credentials to comment on scientific questions related to global warming.
But I do have the credentials to comment on the effect that environmental activists are having on our culture, especially the younger generation.
An Australian website offers counsel to help people (especially young people) deal with stress and anxiety related to climate change. It notes that, "There are lots of reasons why young people might feel stressed about climate change."
These reasons include: 1) They feel like planning for the future is hopeless. 2) They are angry that the people around them aren't doing anything to help. 3) They are frustrated that there's nothing they can do now to change things. 4) They are worried about whether it's responsible to have children. 5) They feel like everything is out of their control.
A May 2 headline on Science News for Students states, "Climate change poses mental health risks to children and teens."
And a September 19 article on Conversation.com warned that, "Ignoring young people's climate change fears is a recipe for anxiety."
In fact, as far back as 2016, the American Psychological Association (APA) claimed that, "Climate change is threatening mental health. A federal report that tapped psychologists' expertise outlines the ways climate change affects us all."
But herein lies the rub. It is not "climate change" that is "threatening mental health." It is the apocalyptic way it is being reported that is threatening mental health.
After all, when I was told in 1971 that Jesus was coming back soon, it was an exciting prospect. The end of the age is fast approaching and we will be with the Lord forever! This world is falling apart, but God will come to redeem us!

But there is no such hope in today's gloom and doom climate change reporting. Instead, it produces fear and provokes frustration, especially for young people: "Our world is being destroyed, and you're not doing anything about it! Don't you care?"
To quote Greta Thunberg directly, "You have stolen my dreams and my childhood with your empty words. ... We are in the beginning of a mass extinction and all you can talk about is money and fairy tales of eternal economic growth -- how dare you!"
But there's a reason for her fears.
An October, 2018, headline proclaimed: "We have 12 years to limit climate change catastrophe, warns UN."
Six months later, in March, 2019, the UN website echoed these sentiments: "Only 11 Years Left to Prevent Irreversible Damage from Climate Change, Speakers Warn during General Assembly High-Level Meeting. Ambition, Urgency Needed to Address Global Emergency, Secretary-General Says."
No wonder teenaged Greta and her generation are up in arms. No wonder they are so stressed. No wonder they are angry. "It is your policies and your greed and your selfishness that have stolen our future!"
As reported on September 26, "Around climate-change protests, tears linger. Youthful activists cite all-too depressing science and develop angst. They grieve for a future they worry they'll never have.
"Many young climate activists say they feel hopeless and overwhelmed. ... 'It's really hard to grow up on a planet full of ifs,' said This is Zero Hour co-founder Jamie Margolin, a 17 year old from Seattle, who is finding hard to buckle down and apply to colleges. 'There's always been a sense that everything beautiful in this world is temporary for my generation.'"
Climate Alarmists are 0-41. How very, very sad -- but not because it's all true.
Instead, as John Nolte pointed out, "For more than 50 years Climate Alarmists in the scientific community and environmental movement have not gotten even one prediction correct, but they do have a perfect record of getting 41 predictions wrong.
"In other words, on at least 41 occasions, these so-called experts have predicted some terrible environmental catastrophe was imminent ... and it never happened."

Consequently, he asks, "Why would we completely restructure our economy and sacrifice our personal freedom for 'experts' who are 0-41, who have never once gotten it right?"
So, young people are being stressed about something that may never happen. They are growing up waiting for the shoe to drop, not being able to enjoy life because of fear for tomorrow.
The innocence of youth is being robbed from them, and everyone is to blame. Yet an article on the Teaching Tolerance website urges that, "Teachers' Silence on Climate Change Violates Students' Rights."
I would urge instead that there needs to be a lot of soul searching and circumspection, from our children's educators to the popular media. Are you sure the information you are sharing is accurate? Are you positive the fears you are instilling are warranted? Are you certain that you are not playing with the emotions of impressionable young people?
From my perspective (and leaning into my areas of expertise), I would rather say this: It's true that this world will not endure forever. One day, Jesus will return and make a new heaven and earth.
So, live your life here with passion, in expectation of His return, making every moment count. That way, whether you live to be 100 or if He comes back in 10 years, your life will be full and blessed.
I challenge a climate change religionist to come up with a better message than that.
Originally posted at Ask Dr Brown - reposted with permission.