Awake Jerusalem - Thousands Of Christians Gather To Pray For Jerusalem 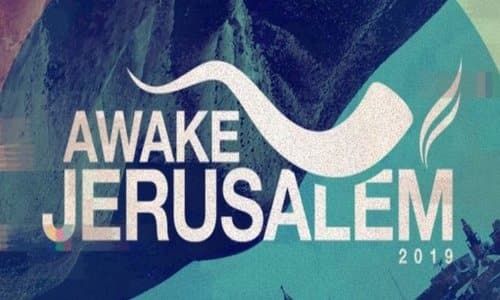 By JNS.org October 08, 2019
Share this article:
Eagles' Wings, a nonprofit New York-based evangelical movement, hosted a "Global Day of Prayer for the Peace of Jerusalem" on Sunday, bringing together 70 millennial pastors from the United States, Canada and Brazil to Israel, many for the first time, along with their followers.
Additionally, more than 500,000 evangelical Christian churches worldwide tuned in as GOD TV broadcasted the event to more than 260 million homes globally.
Government, religious and business leaders, including other major Jewish and Christian global leaders, participated in the Jerusalem event at the Tayelet Haas Promenade, where U.S. Ambassador to Israel David Friedman addressed the group.

The event was led by Eagles' Wings executive director Bishop Robert Stearns, who has brought more than 10,000 evangelical Christians to Israel to date and continues to reshape Israel's narrative in a positive way throughout the church worldwide.
"We are here today declaring that there is a new breed of Christianity alive in today's world--a Christianity which understands that spiritually, we were born in Zion," said Stearns. "We stand in prayer and action believing in a peace plan not hatched in the halls of the U.N., but coming from hearts who learn and experience the God of love. God can change hearts, and changed hearts can change history."
The day of prayer concluded the "Awake Jerusalem" event, a three-day gathering where hundreds of Christians from more than 10 nations assembled at key sites in Jerusalem for worship and teaching.
"I am so blessed to celebrate with such incredible people--such inspirational and distinguished religious leaders like all of you--to celebrate the State of Israel, to celebrate this holy city of Jerusalem, and, of course, to celebrate the unbreakable relationship between the United States and Israel," said Friedman.

"Sometimes, the truth hurts, but the denial of truth hurts even more. We will never give any platform to those who seek to deny the truth about Jerusalem; such denial brings no peace, such denial brings no tranquility," he said.
"We will continue to pray for the peace of Jerusalem as we do today, but it will be for peace based upon the truth--the undeniable and now the scientifically corroborated truth--about how the roots of the Jewish people and the roots of Christianity are both centered in this Holy City, a city small in size but so immeasurably large in purpose and in meaning."
Most of the pastors had never been to Israel before and documented their visit on social media to their combined 35 million followers. The trip was designed to help educate these young influential leaders about the Jewish state.
Originally published at JNS.org  - reposted with permission.