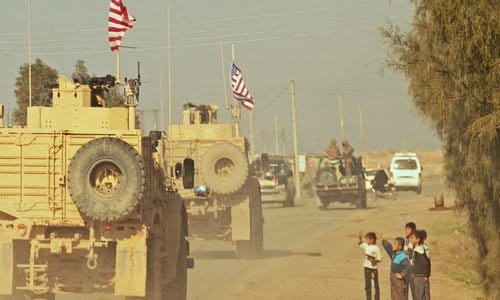 By Yaakov Lappin/JNS.org October 08, 2019
Share this article:
The decision by U.S. President Donald Trump to pull back troops from northern Syria in the face of a likely Turkish offensive against Kurdish forces is a blow to American deterrent power in the Middle East. It is also a move that looks set to hasten the creation of a power vacuum, which a variety of Islamists will look forward to filling.
While it’s too soon to know the full impact the move will have, it raises several potential scenarios, some of which would be deeply destructive for regional security.
The Pentagon was reportedly taken by surprise by the decision. Some of the fiercest criticism to Trump’s sudden move came from the president’s own Republican allies and those who had worked closely with him.
Sen. Lindsay Graham (R-S.C.) blasted the decision as shortsighted, impulsive and irresponsible in its treatment of the Kurds—a loyal U.S. ally—as well as wind up being a move that will prove beneficial to ISIS and Iran, the world’s foremost state-backer of terrorism.

After receiving a rare rebuke from Republican allies, Trump responded with a tweet saying he would  “obliterate” the Turkey economy if it does anything he considers to be “off limits.”
Turkish President Recep Tayyip Erdoğan has been threatening to invade northern Syria in order to destroy Kurdish YPG forces, which are a central part of the Syrian Democratic Forces (SDF). The SDF has been a key U.S. partner on the ground in Syria, spearheading land operations against ISIS’s caliphate, playing a key role in the caliphate’s destruction and losing an estimated 11,000 fighters in the process.
Now, the SDF has been abandoned to the designs of an Islamist Turkey bent on starting a new war with the Kurds. Erdoğan wants his military to take over the SDF’s area of operations—an area that includes the Al-Hawl refugee camp in northern Syria, which is crawling with ISIS loyalists, and which observers have warned would form the basis of an ISIS revival if the site stops being secured by the SDF.
Brett McGurk, a former presidential envoy who worked under Trump to help shape the campaign against ISIS in Syria, warned in a tweet on Monday that Turkey has “neither the intent, desire, nor capacity to manage 60k detainees” in Al-Hawl. “Believing otherwise is a reckless gamble with our national security,” he stated.
As a result, the first two potential beneficiaries of Trump’s decision are Turkey and ISIS.
A resurgent ISIS would destabilize the region, and a new Turkish-Kurdish conflict has the potential to create a new humanitarian disaster.

Countering the regional threat posed by Tehran
The Kurds in Syria, for their part, find themselves in the nightmare scenario of being fully abandoned to Turkey’s whims and can be expected to make desperate efforts to find a new superpower friend.
That can only be Russia, which has demonstrated full loyalty to its clients, already maintains a powerful military presence in Syria and whose regional credibility has surpassed that of the United States, which is seen to be turning inwards, disengaging from the region and even betraying allies.
This doesn’t mean, however, that Russia welcomes the move, as Moscow hasn’t signaled approval of a Turkish incursion into Syrian territory. Its interest is in preserving the regime sovereignty of Syrian President Bashar Assad and stabilizing the country. Turkey’s plans would undermine those interests.
An additional beneficiary of the U.S. withdrawal is likely to be Iran. Iranian-backed militias are located to the south and east of Kurdish-controlled northern Syria, and these forces are likely to try to fill some of the vacuum left behind.
Iran is working to flood Syria with its proxy forces, and to build a continuous land corridor between Iraq and Syria. America’s military presence in northern Syria—and the presence of pro-American Kurdish forces—helped block such efforts. Now that roadblock looks set to be lifted.

From a wider regional perspective, the Iranian regime has assessed that isolationism and adversity to risk-taking is driving Trump’s agenda in the region, and it is this calculation that led the Iranians to dare strike Saudi Arabian oil facilities in September, using advanced cruise missiles and explosive drone swarms.
That attack, launched from Iranian territory according to U.S. intelligence sources, forms the most significant strike on Middle Eastern oil sites since the 1991 Gulf War and shook up the global oil market.
As the Iranians predicted, no military response followed.
These developments have the potential to embolden Iran to hasten violations of what remains of the 2015 nuclear deal and restart its nuclear program.
In light of the above, Israel’s military independence and freedom of maneuver is essential. Israel must be prepared to engage an Iran that is growing in confidence, and that is increasingly willing to use its own military forces to attack Israel and Sunni Arab states.
Israel must work with pragmatic Sunni powers in the region to counter the Iranian threat, based on the assumption that Trump is interested in militarily disengaging from the Middle East.
The Israel Defense Forces is building itself up to be able to defeat any combination of  enemies, with a combination of powerful offensive and defensive capabilities. Israel is continuing to develop its multi-layered air defense system, and building up its air, sea, and land forces.
As Iran continues to try and surround Israel with missile bases, terrorist staging areas and a variety of terror armies, Israel’s ability to defend itself by itself may be put to the test in the not too distant future.
Originally published at JNS.org - reposted with permission.