Negotiations With Iran Are Guaranteed To Fail 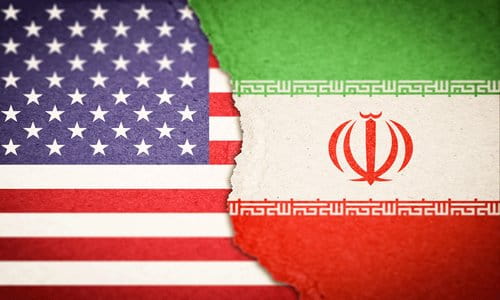 By Ken Abramowitz/JNS.org October 11, 2019
Share this article:
The Trump administration has publicly stated that the goal of its "maximum pressure" campaign on Iran is to increase sanctions until its rulers come to the negotiating table.
What can be accomplished if and when U.S.-Iranian negotiations get under way? What are the chances of success, when democracies negotiate with dictatorships, and in particular a dictatorship that is the #1 Islamist terror-sponsoring nation in the world?
It is worth recalling how many times Winston Churchill publicly warned his fellow Britons of the logical outcome of Nazi Germany's rush to build the world's largest offensive military machine, all in violation of the terms of its surrender under the Versailles Treaty.

Churchill warned that ignoring this threat, and seeking to negotiate with Hitler, not only would not avoid war, it would make it more likely--because the Nazi dictator had no intention of honoring any of his agreements and this appeasement was merely buying the National Socialists more time to build their war machine.
Churchill was dismissed as a "warmonger," just as John Bolton was until he resigned from/was ejected from his role as U.S. President Donald Trump's National Security Advisor.
As with any negotiation, the United States can win, lose, or tie. The United States would aim to tie, as is common within Western civilization, which entails compromise by both sides. Unfortunately, the mullahs who rule Iran do not share this Western philosophy.
Their goal is to unconditionally defeat the United States. Recall that at the same time they were "negotiating" the nuclear "deal" with President Barack Obama, Iran's "supreme leader" Ayatollah Khamenei was leading public chants of, "Death To America!"
So it is for the United States to determine the outcome of this negotiation.

If we simply focus on re-negotiating the Joint Comprehensive Plan of Action (JCPOA, the Iran nuclear "deal"), maybe inspections will be tightened, and maybe the 10-year sunset clause (after which the mullahs will be free to build all the nuclear weapons they want) will be extended to 15-20 years, and maybe intercontinental ballistic missiles (ICBMs) to carry nuclear weapons will be included--for the first time.
This outcome might be portrayed as a victory, but will still give Iran plenty of time, money and ability to cheat, just as we recently discovered they have been since they "agreed" to the JCPOA. And, as we also recently discovered, the mullahs have been relentlessly working to obtain the material necessary to build nuclear weapons, including from JCPOA signatory nations.
The deal would still grant Iran the right to have nuclear weapons and long-range missiles, eventually, which would, over time, become an existential threat to the United States. In other words, Iran would win.
However, if the United States insists on winning, it should insist that Iran meets the State Department's 12 conditions for normalizing relations with America.
Iran should be forced to make even more concessions, including:
• Dismantling its worldwide terror organizations, cells and operatives.
• Closing its 17 al-Mustafa universities in Africa, and its 80 "cultural centers" in Latin America.
•  Apologizing to the United States and Israel for preaching genocide against both countries--and for its proven role in helping Al Qaeda perpetrate the 9/11 attacks.
•  Stopping its imperialistic designs, and agreeing to stay within its own borders.

Iran would only agree to this losing deal (for them) if they were convinced that the U.S. military will be unleashed, both to retaliate for the thousands of Americans and U.S. soldiers killed and maimed by Iran, and to prevent the mullahs who ordered it all from ever acquiring nuclear weapons.
Without the definite determination to win, the Trump administration will most likely seek to tie, which will lead to a U.S. defeat.
We must all hope that the Trump administration does not seek an early tie, but has the determination and patience to do whatever it takes to win.
The future of the United States and Western civilization depends on it.
Originally published at JNS.org - reposted with permission.