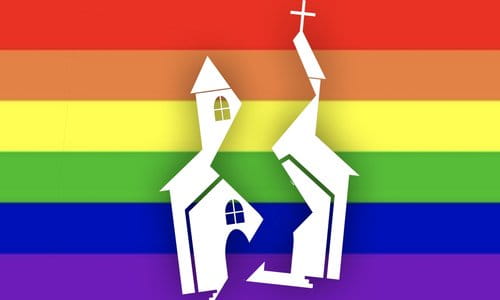 By Jonathan Van Maren/The Bridgehead October 16, 2019
Share this article:
As those of you who read my rundown last week will know, the Democratic Party formally came out of the closet last week at the CNN LGBTQ Town Hall. They promised everything that was requested and more--Joe Biden almost took a lunge at Anderson Cooper at one point--and made it clear (if it wasn't already) that they have chosen their side in the culture war.
The gay marriage debate is not about "equal rights" or "tolerance" or anything like that. It is about one side winning, and the other side losing. And in this case, the winners want to crush the losers, and the Democratic Party is eager to help.
This is not a surprise, in some ways. After all, same-sex marriage was only legalized across the US in 2015 and already we've got bakers, photographers, and other professionals being driven out of business, LGBTQ education being installed in schools right across the country, drag queens reading stories to children in public libraries, and transgender 9-year-olds showing up on CNN to wild applause and the warm support of Democrat who should be old enough to know better.

It bears mentioning that when Christians warned that this sort of thing was inevitable, the LGBT crowd called us liars. That was a tactic on their part, not the truth. They knew they were lying.
Beto O'Rourke is like the kid at the supper table who looks at his parents with innocent eyes and says, right in front of the guests: But I thought you said you hated it when they come over? The fact that it is true does not make it any less embarrassing.
It is not the time or the place to say such a thing. So when Beto blurted out that it was his view that religious institutions and churches who hold to the traditional view of marriage should be punished by losing their tax-exempt status, the Left was furious. Not because they disagree with him, mind you--they just do not think it is a smart thing to say right now. One thing at a time, Beto. One thing at a time.
Because it is not the time--you wait until after an election before screwing people you want to vote for you--and not the place, either. You say that sort of thing at a New York cocktail party, not on CNN where some of the rubes might hear you. Thus, Tom Nichols in USA Today demanded to know why the Democrats seem so intent on blowing the next election:
When we watched CNN's LGBTQ town hall for the Democratic candidates Thursday, we had very different reactions. This is the event, you remember, where former Rep. Beto O'Rourke of Texas said he'd punish religious institutions for refusing gay marriage, and where Sen. Kamala Harris of California started by informing us of her pronouns, and then host Chris Cuomo, after a mild and dopey joke, had to go on Twitter the next day and apologize for making light of it.

This is where Sen. Elizabeth Warren of Massachusetts fielded a question about traditional marriage with a sneering, smug insinuation that the only people who would ask her about that are men who can't find a woman.
You saw a ringing defense of LGBTQ rights and a reaffirmation of what Democrats stand for. I saw it and thought: Are these people insane? Are they trying to lose the election?
No, they're not. They're forgetting that they need the deplorables, and that insulting them and coming off as rainbow Pharisees is not going to assist their election chances. John Inazu, professor of law and religion at Washington University in St. Louis, took it even further in The Atlantic:
Beto's view isn't entirely new to Democrats. It echoes, for example, then-Solicitor General Donald Verrilli's concession during his oral argument in Obergefell v. Hodges in 2015 that the tax-exempt status of Christian colleges and universities who hold traditional views of marriage was "going to be an issue."
And it aligns with the Harvard law professor Mark Tushnet's policy recommendation to take a "hard line" with religious conservatives because, after all, "trying to be nice to the losers didn't work well after the Civil War," and "taking a hard line seemed to work reasonably well in Germany and Japan after 1945."
We can be certain this issue will be used in Republican political ads, especially in congressional districts that Obama won in 2012, but that Trump won in 2016. And I suspect this issue and O'Rourke's framing of it will lead to increased turnout of evangelicals in states that matter to Democrats, such as Michigan, Ohio, and Pennsylvania. O'Rourke's comment may quickly fall out of the national news cycle, but it won't be forgotten among churches, religious organizations, and religious voters.
And if the Democrats lose in 2020, this issue and their handling of it will likely be a contributing factor. That will be true regardless of who the eventual Republican or Democratic candidates are.
Second, journalists should ask O'Rourke and every other Democratic candidate how this policy position would affect conservative black churches, mosques and other Islamic organizations, and orthodox Jewish communities, among others. It is difficult to understand how Democratic candidates can be "for" these communities--advocating tolerance along the way--if they are actively lobbying to put them out of business.

Third, policy analysts should assess the damage O'Rourke's proposal would cause to the charitable sector. O'Rourke's stance--if played out to its end--would decimate the charitable sector. It is certainly the case that massive amounts of government funding flow through religious charitable organizations in the form of grants and tax exemptions.
But anyone who thinks this is simply a pass-through that can be redirected to government providers or newly established charitable networks that better conform to Democratic orthodoxies is naive to the realities of the charitable sector.
Beto O'Rourke is a very useful figure on the national stage because he has nothing to lose, and thus he is able to say what the Democrats believe but cannot say for the moment. There's not a single Democratic candidate who doesn't agree with him on gun buybacks, on the elimination of religious liberty, and on abortion-until-birth (except perhaps for Tulsi Gabbard.)
Ironically, he has become the Democratic truth-teller. The Democrats assure the public that they only wish to pursue reasonable policies, and would never attempt to infringe on basic rights.
And then, aflame with zeal, Beto shows up: What do you mean? Of course we're going to take your guns, cripple your churches, and radically reduce your freedoms overnight! We all talk about it all the time!
Originally published at The Bridgehead - reposted with permission.