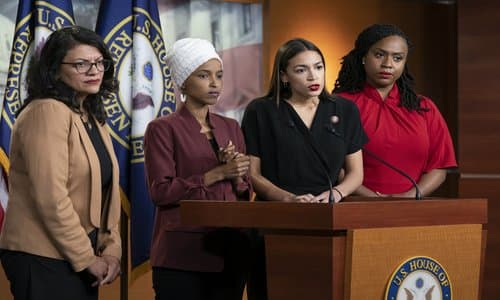 By Jonathan Tobin/JNS.org October 18, 2019
Share this article:
At a time when his presidential campaign seemed about to go on life support, Sen. Bernie Sanders (I-Vt.) was thrilled to get a boost from his party's rock stars. Just days after returning to the campaign trail after suffering a heart attack, the 78-year-old avowed Socialist received a much-needed shot in the arm when he received the endorsement of Reps. Alexandria Ocasio-Cortez (D-N.Y.) and Ilhan Omar (D-Minn.).
Another member of the so-called "Squad" of Democratic left-wingers, Michigan Rep. Rashida Tlaib, initially said she would join in the endorsement but pulled back at the last moment, apparently still undecided about whether she would instead back Massachusetts Sen. Elizabeth Warren for the 2020 presidential nomination.

Tlaib's dithering notwithstanding, the announcement that Omar--one of the country's leading opponents of Israel, as well as someone who has engaged in egregious anti-Semitic rhetoric--is "feeling the Bern" and putting her not inconsiderable influence behind his campaign is significant.
Many Democrats, including party chairman Tom Perez, have referred to AOC and the other three squad members (Massachusetts Rep. Ayanna Pressley being the fourth) as the "future of the Democratic Party."
The willingness of so many to herald the fact that the most virulent backers of the anti-Semitic BDS movement chose him out of the huge Democratic field as their candidate makes it clear that efforts by pro-Israel members of the party to marginalize Omar and Tlaib have failed.
Nor is Omar the only Israel-hater that Sanders has embraced. As I wrote back in September, Sanders had no compunction about appointing BDS poster girl Linda Sarsour as one of his official campaign surrogates.
Sarsour has attacked Jewish women for supporting Israel and engaged in her own list of anti-Semitic actions, including support for a hatemonger like the Nation of Islam's Louis Farrakhan during her time as a leader of the anti-Trump Women's March activist group.
Now another Palestinian-American, Amer Zahr, has joined her as a Sanders surrogate. Zahr is a University of Detroit law professor and sometime standup comedian who not only endorses BDS, but also has a record of vicious attacks on Jews and Israelis. He refers to the latter as "foreign colonialist settlers." He has said that: "Describing defenders of Israel as 'scumbags,' 'pigs' and 'bastards' is not necessary. 'Zionist' is sufficiently insulting."

What is a candidate like Sanders, who is not only Jewish but describes himself as "100 percent pro-Israel," doing surrounded by people like Omar, Sarsour and Zahr?
Sanders embodies a new definition of Jewish identify in which a sense of Jewish peoplehood and support for the rights of Jews is replaced by a universalist desire to embrace the Jewish state's enemies. Along those lines, he is, as the author of a Jewish Telegraphic Agency column stated, "the future of American Jewry," despite his advanced age.
In a field of candidates that features many who are willing to be highly critical of Israel and its government, Sanders is, ironically, the least supportive of the Jewish state among the Democrats' serious presidential contenders.
That has been repeatedly demonstrated in recent years as his attacks on Israeli measures of self-defense against Hamas terrorists and over-the-top condemnations of Israeli Prime Minister Benjamin Netanyahu have been balanced by his insistence that he is nevertheless a supporter of the country.
It's not clear whether the Squad, let alone Sarsour and Amer, can help Sanders keep up with Warren, who seems to have eclipsed the fading Joe Biden as the Democratic frontrunner. But she may not be radical or anti-Israel enough for AOC and her friends, as well as the likes of Sarsour.

But more important than the fate of his candidacy is the way that these anti-Semitic Israel-haters are using Sanders to legitimize their positions and further advance their efforts to ensure that support for BDS is a mainstream, rather than a marginal, force within the Democratic Party. Indeed, we should expect that Omar and Sarsour will trot out their endorsements of Sanders in the future as fake proof that they are not anti-Semites, despite an abundance of evidence to the contrary.
Right now, most Democrats are transfixed by the competition among their presidential candidates and their debates over how big they want government to be, as well as how much they will allow radical identity politics to dominate public discourse. Yet the steady advances made by peddlers of intersectional myths that demonize Israel, such as Tlaib, in mainstreaming their noxious ideology is a story that's not getting enough attention.
The failure of the other Democratic candidates to call Sanders to account for his embrace of anti-Semites is discouraging. But in a party where Omar and Tlaib are treated as heroines and victims of right-wing smears rather than purveyors of hate, that isn't realistic.
Indeed, Warren's efforts to snatch Tlaib's endorsement away from Sanders indicates that despite the support of most of their congressional caucus and a plurality of their voters for Israel, the future of radical anti-Semites in the Democratic is all too bright.
Originally published at JNS.org - reposted with permission.