The War For Our Youth - Why Creation Still Matters 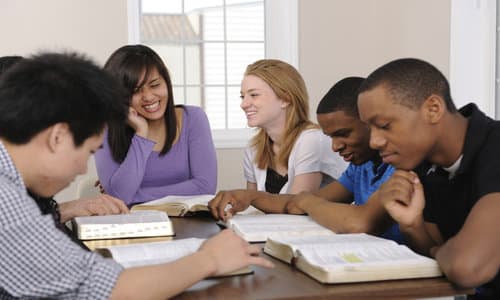 By Mike Riddle/Lamb/Lion Ministries October 18, 2019
Share this article:
This country today is engaged in the greatest war it has ever been in. It's not a war being fought with guns and bombs; it is a war of ideologies. It is a war of worldviews. It is a war for the very heart and soul of this nation. And, if we lose this war, we will lose America. That is what is at stake.
Before the United States Marine Corp sends our troops to the battlefield, we sit down and do a briefing. It's called a Five Paragraph Order. I'm going to give you three of those things today: What is our situation? What is our mission? How are we going to execute this mission for nothing less than victory?
We brief our soldiers to protect their lives. I do so now because there are many spiritual lives being lost in America today. They're called our youth. They are being stolen from us.

What Is Our Situation?
In our briefing, let's start with part one — our situation. We're being told by the public education system, universities, the news media, and unfortunately many church leaders, that parts of the Bible are not relevant anymore and that we need to reinvent God's Word. So, with this situation, in order to understand how to fight this battle, we've got to know what battle it is we are fighting in. What kind of things are we up against?
Let's start with a case study right out of 1 Corinthians 1:23. "But we preach Christ crucified, unto the Jews a stumbling block..." Notice preaching the cross and the resurrection to the Jews was a stumbling block. But, look at the second part of that verse, "...unto the Greeks the cross and the resurrection are foolishness." Why the difference? If we don't understand this difference, you're not going to know how to fight this battle. Why the difference?
In Acts 2, Peter is preaching to the Jews, and he preaches the cross and the resurrection, but they only call it a stumbling block. Why? Because the Jews had a common foundation and a common background. They believed in Moses and the prophets. They understood that there was a Creator God, so it was just a stumbling block. But, when Paul preaches the cross and the resurrection to the Greeks, they see it as foolishness. Why? Because they do not understand Moses and the prophets, and they don't believe in a Creator God.

So, what does Paul do? He goes back and lays the foundation that our God is greater. There's a foundation to our Gospel, and we forget about that. Many of the people in our churches and some of our Christian leaders do not believe the foundation anymore. They are even trying to rewrite it! We need to understand that. We are no longer an Acts 2 nation, rather, we're an Acts 17 nation because our youth are not being taught about a greater God anymore.
Where Do Many Churches Stand Today?
They avoid controversial topics such as the Creation, sin, Hell, and marriage. It's called "soft teaching." I don't remember Jesus ever doing that. They let the culture influence the Church rather than the Church influencing the culture with the Gospel. They make church growth their main goal rather than the Great Commission. We no longer have teachers in our churches, and even in many of our Christian schools, who possess the knowledge to equip our youth about how to defend their faith. Christianity is in a lot of trouble!
What happens when the Church stops teaching parts of the Bible? Well, easy, the world will supply the answers. And, that's exactly what is happening to our youth today, because many of our Christian schools do not teach Apologetics. They do not believe in the Creation account. As a result, six independent studies concluded that over 60% of our youth today are leaving the Church. That's a very high casualty rate!

Why Are the Youth Leaving?
I will explain the main reasons why they are leaving. Number one, Christianity is perceived as being shallow and exclusive. I don't mind exclusive because we are exclusive. What does the Bible tell us? There is only one way to the Father and that is through Jesus Christ, so we must be exclusive. But, shallow? Listen to most of the preaching going on in our churches today. Very sad!
Number two, Christianity appears to be anti-Science. There is no reason for that assumption. Who created all the scientific principles out there? God did! He's not contradicting Himself, because the true Science does and always will support His Word, because He is the Creator of all things. God is not in a battle with Himself.
Number three, our children are heavily indoctrinated into Evolution. Our youth are often not prepared to defend their faith against Evolutionary teachings because of all the soft teaching we are getting in our churches and the lack of believing God's Word in our Christian schools. Our Christian institutions lack the teaching of the specific and scientific evidence for a Creator.
Do you need evidence that there is a Creator? Just look at the human body. It's so incredible! It's an insult to our intelligence to believe that something so amazingly complex just evolved.
Did you know that if you took all of your blood vessels and capillaries and lined them up, how long would that be? A mile? How about 10 miles? How about 60,000? Yes, that's it! Can you imagine putting a machine together with 60,000 miles of wire and having it work? No, but God did that. That's just one of the many amazing things He did. If you read that verse about how we are fearfully and wonderfully made, well, that's so true.
College is a hostile environment towards Christianity, especially to anybody who believes in the Creation. We are setting our youth up for failure because we are not teaching them about the Creation.
Our kids are also inundated by the teachings about moral relativism, and they are not ready to handle that topic as it relates to their faith. They are taught that there are no absolutes, and they don't know how to answer that challenge to their faith.
Are there no absolutes? Are you absolutely sure? The statement about there being no absolutes is itself an absolute statement. See, moral relativism is a self-defeating philosophy. We need to train our students on this one. So many of our youth think they are saved, but they are not saved, and yet they go on mission trips. We have a problem!
Let's take a look at American culture. Since so many of our youth are leaving the Church, then we need to understand why. I'll give you the wrong answer: reinvent the Church to be more like the culture. That's what a lot of churches are doing today.
The correct answer: understand how the culture is challenging God's Word and train our people how to respond to these challenges. It's called education. Real education! Not just writing answers on a test; that doesn't qualify. The Bible says we are to be doers of God's Word. Can they verbalize this truth? That's education.
Don Bierle, who holds a Ph.D. in Life Sciences, in his book Surprised by Faith made this statement: "At that time, 14 years old and during the subsequent few years, I did not see the Church as a source of answers. I was asking why and could not find answers." That is a very typical response I get from our youth. The Church is not supplying answers.
Ken Ham and Avery Foley wrote in Why Young People Leave the Church: "These young people are not getting solid answers from church leaders and parents. Sadly, they are often told they can believe in the Big Bang, millions of years, and Evolution. They are then admonished to reinterpret or ignore Genesis while being told to trust Jesus." That's a contradiction! No wonder they are confused and leave the Church. They lack confidence in God's Word. And, this error is coming right out of the Church!
This is the battleground that is killing our children's faith. We need to understand this if we are going to wage the war for our children's souls. We must defend the biblical account of the Creation as the starting point if we are to win this battle.
Listen to Mike Riddle's Full presentation on this topic here.