Dangerous Trends: More Than Half Of Americans Want Government To Censor Speech 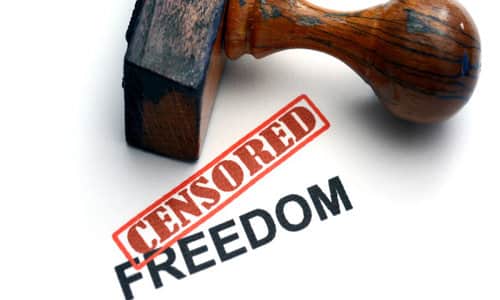 By Mac Slavo/SHTFplan.com October 29, 2019
Share this article:
The results of a new survey are truely disturbing.  More than half of Americans want themselves, others, and the media censored by the government.
Unfortunately, instead of learning from history, people are actually asking for a repeat of Nazi Germany or the gulags of the Soviet Union.

The First Amendment, which guarantees Americans freedom of speech, should be overhauled to reflect current cultural norms, according to 51 percent of the respondents to a survey published by the Campaign for Free Speech.
The campaign is hoping to call attention to the dire state of Americans' preeminent civil rights with the poll, which breaks down opposition along gender, race, class, and educational lines.
History will continue to repeat until humans learn the lessons of the past.  Censorship is always necessary for tyranny to thrive.
The younger respondents were, the more they supported overhauling the law to restrict speech.
However, college graduates were the least likely of all educational groupings to support the restrictions, indicating that the increasingly regulated speech environment at American universities may be backfiring in some cases and producing adults who cherish their rights because they know what it's like to be deprived of them.

What was also horrifying, is that over half of millennials believe "hate speech" should be against the law, though no definition of "hate speech" was given (and indeed the definition tends to vary given the time and place but Christians can be guaranteed Biblical views of morality will be considered "hate") during the survey.
Most of those who want a ban on such speech consider jail time an appropriate penalty, although female respondents were the least supportive of such draconian sentencing.
And it isn't just the free speech of their fellow Americans that some people want to be censored.  They also want what is essentially, state-owned media.
In fact, 57 % of respondents support government action against "newspapers and TV stations that publish content that is biased, inflammatory, or false," with nearly half of those agreeing such offenses should carry a jail sentence.
That means the government will get to decide the official narrative, and those who have evidence otherwise or dare to speculate against the government would be kidnapped and forced to spend time in jail.

The media is not particularly well-liked in 2019, with the average American trusting the press less even than lawyers and members of Congress, and people over 65 years-old were the only group in which the majority opposed punitive government regulation.
But using the government to force the media to parrot the official narrative will only result in absolute brainwashing without any resemblance of the free-thinking that made society great left.
A majority of Americans want the government to decide what the truth is and then punish those who disagree.
If that sounds a lot like Communism your right but try telling that to today's youth.
Another survey recently conducted by the Victims of Communism and polled by the research and data firm YouGov, found that 70% of Millennials are likely to vote socialist and that one in three Millennials perceive communism as "favorable".
This is our future if something doesn't change soon.
Originally posted at SHTFplan.com - reposted with permission.