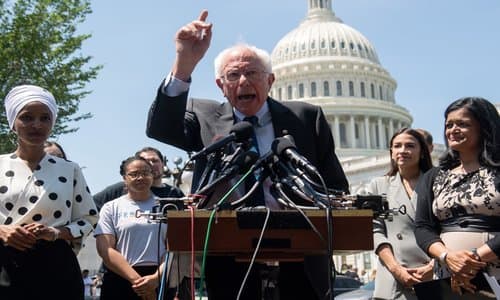 By Meira Svirsky/Clarion Project November 06, 2019
Share this article:
Democrat presidential candidate Bernie Sanders said that part of the money that America gives to its ally Israel should be diverted to Gaza.
"My solution is, to Israel, if you want military aid you're going to have to fundamentally change your relationship to the people of Gaza," he said. "I would say that some of the $3.8 billion should go right now to humanitarian aid in Gaza."

Sanders' proposal essentially calls for the U.S. giving money to a U.S.-designated terrorist organization, Hamas, the duly elected government of Gaza.
Hamas has historically used the billions of dollars of aid monies given to Gaza to build its terrorist infrastructure and line its own pockets -- not for the benefit of the people it governs.
Even if Sanders wanted to give the money directly to the people, short of standing on the street corner himself and doling out dollars bills, the money would still go to Hamas. The terror organization has a history of taking over aid organizations (including those from the UN) in Gaza.
Documentation of these facts is irrefutable. Moreover, they are certainly facts of which Bernie Sanders is well aware.
Bernie Sanders made the outrageous proposal at a J Street conference earlier this week. J Street is an organization that purports itself to be pro-Israel, however, it is known for its Far Left, anti-Zionist stances.

Other Democrat presidential candidates spoke at the conference or sent messages as well: frontrunners Elizabeth Warren and Joe Biden, also  Andrew Yang, Marianne Williamson, Pete Buttigieg, Julian Castro and Amy Klobuchar.
However, Sanders was the only candidate essentially proposing to give money to a terror organization.
Sanders' proposal was met with derision by the head of Israel's parliament Yuli Edelstein, who said the senator should "stop talking nonsense."
With Sanders' support for taking money away from America's ally Israel and giving it to Gaza (read: Hamas), it is not surprising that he has been endorsed by Congresswomen Ilhan Omar, Rashida Tlaib and Alexandria Ocasio-Cortez as well as sharia-apologist Linda Sarsour, who works as Sanders' campaign surrogate.
Each of these has previously endorsed either Hamas' terror actions against Israel or the anti-Semitic Boycott, Sanction and Divest (BDS) movement against Israel.
The BDS movement aims to strangle the Jewish state economically, while at the same time calls for the flooding of Palestinians into Israel to destroy the Jewish character of the state.

According to the definition of anti-Semitism by the International Holocaust Remembrance Alliance and officially adopted by the U.S. (and 31 other nations), the BDS movement is, at its core, an anti-Semitic movement. Even a recent UN report lambasted the movement's role in promoting anti-Semitism.
One thing Bernie Sanders is right about is his statement: "What is going on in Gaza right now, for example, is absolutely inhumane. It is unacceptable. It is unsustainable."
Only that's not because of the policies of America's ally Israel. It's because of the fact that a terror organization - Hamas - was elected by the people of Gaza to govern them.
Originally published at Clarion Project - reposted with permission.