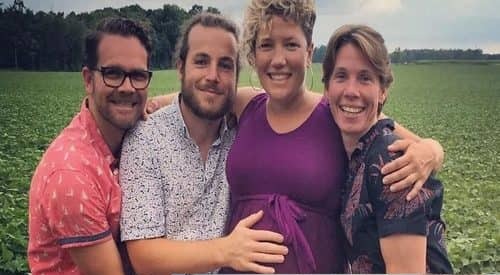 By Jonathon Van Maren/Bridgehead.ca November 06, 2019
Share this article:
The Sexual Revolution is rapidly pushing towards the total breakdown of boundaries, both social and biological.
With the stunning rise of gender ideology and our culture's near total collapse in the face of the trans movement's advance, science has now become the slave of ideology, with the belief in bodily autonomy encompassing the conviction that we can mold reality to our wills--essentially, that each of us can create our own personal tailor-made reality, and that society should force everyone else to accept our choices.
The sexual totalitarian's response to pesky questions about all this is literally the familiar response of an authoritarian figure: "Because I said so, that's why."

On the social front, progressives are working on finishing off the institution of marriage. Having gutted it of its traditional millennia-old moral and natural law meaning, they are now attempting to mangle it beyond all recognition. A "family," the new talking points go, is any cluster of people who are choosing to sleep with one another at any given time.
The children of that family may thus have a string of rotating parental figures who may or may not be biologically related to them, and the stability of their lives is attached to the stability of "open relationships," which is to say that there is none.
Nobody seems to have any problem with this, because we long ago accepted that children would be the collateral damage of this revolution, and so the desire of children for a mother and a father are dismissed as a hangover from a less enlightened age.
And so the media has now begun to mainstream the idea of "polyamory," which is essentially the practice of loosely organized promiscuity, but with some rights and dignity attached to it. From The Christian Post:
A brewing push is afoot to overhaul laws to accommodate polyamorous relations, euphemistically known as "consensual non-monogamous" arrangements. In a Thursday CBS News interview, self-described LGBT legal activist Diana Adams explained that she intends to support non-traditional families, including polyamorous ones, before the law has caught up.
"There are significant holes in coverage for families that don't fit into a two-person marriage situation," she said. Asked to elaborate on what available legal tools she would draw on to contain a multi-partner union and family, the lawyer suggested setting up a limited liability corporation.

"Forming an LLC is one way to allow people to structure finances, to maybe share a health insurance plan, to own real estate as three or more people without getting into a question of whether the government is approving of your relationship, whether or not you're in a romantic relationship, [it] shouldn't matter," Adams offered.
"I think we are seeing more people who are thinking about structuring their own kinds of relationships by contracts, doing real estate agreements, doing the LLC, making a financial agreement for support, you could do cohabitation agreement if you're not getting married that would be about financial support if you were to break up."
The lawyer went on to claim that polyamorous persons face various risks and discrimination and are not being guaranteed things such as immigration benefits and inheritance rights. If persons who practice this way of life in a culturally conservative area, they are not likely to be heard favorably in court because the judge will likely be conservative, she noted, adding that judges are increasingly more receptive to these relational arrangements.
Adams maintained that the relevant social science data now demonstrates that consensual non-monogamy and polyamory are "within the realm of healthy adult relationships and sexuality and that the children do fine." Writing in Quillette Monday, University of New Mexico psychology professor Geoffrey Miller suggested that polyamory should be taken seriously and is, while still a small subculture, more common than being gay or lesbian.
"I think that's going to help create change nationwide over time but at this point [polyamorous] people still are at risk," Adams said, going on to praise the city of San Francisco, which has taken the lead in "broad partnership policies." Many who practice polyamory are still closeted because of "stigma and discrimination," she continued, urging the creating more "uniformity" in parenting law nationwide.
That expressed need to create uniformity "gave away the game" said Jennifer Roback Morse, founder and president of the Ruth Institute in Lake Charles, Louisiana. In the end, the lawyer's words amount to nothing but a massive state power grab, she believes. "We used to have uniform laws. The woman who gives birth to the child is presumed to be the child's one and only legally recognized mother. Her husband is presumed to be the child's one and only legally recognized father," Morse explained in an email to The Christian Post Monday.

"The end game for the sexual revolutionaries is to capture the state to redefine parenthood. They want contract parenting, with no legal 'privileging' or 'incentivizing' of biological relationships. This has been the goal of the LGBT legal community and their allies for some time.
Redefining parenthood was always part of the goal of redefining marriage. The charming lesbian couple with children was the rhetorical battering ram to accomplish that through gay marriage. Today, the 'consensual non-monogamy' people are their current battering ram."
To be blunt, it seems honest that this most recent interest group of libertines who have coalesced around their preferred pelvic proclivities will eventually get what they want, too. Once we decided that marriage was whatever somebody wanted it to be, the number of partners was sure to become optional at some point, as well.
And with gender and biological reality itself becoming a reality, the boundaries have been abolished and there is simply no solid reason to reject these new claims now that we have rejected the Judeo-Christian foundation society once stood on.
We are standing with our feet firmly planted in mid-air, and it is increasingly a long, long drop to the bottom. And, as Douglas Wilson once noted, when someone leaps off a cliff, they will briefly feel the exhilarating sensation of absolute freedom--before the law of gravity asserts itself and they smash to pieces on the rocks below.
Originally published at The Bridgehead - reposted with permission.