The Clash Between Faith & Politics In The West 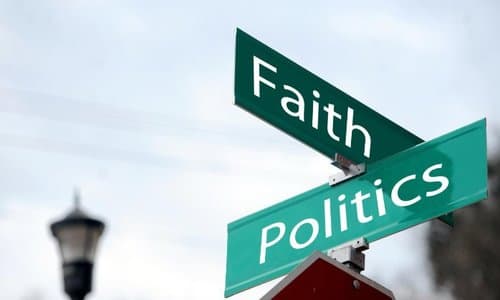 By Melanie Phillips/JNS November 08, 2019
Share this article:
In the never-ending uproar over U.S. President Donald Trump, his administration's recent move to lift a ban on traditional Christian adoption agencies went relatively unremarked.
Under President Barack Obama, child-welfare agencies were refused federal grants if they wouldn't place children for adoption with same-sex couples. Last week, the White House reversed that ruling on the grounds that such agencies would no longer be forced "to choose between helping children and their faith."
This followed a notable speech last month at the University of Notre Dame law school by U.S. Attorney General William Barr, in which he discussed his Catholic faith and passionately denounced secular intolerance.

The Trump adoption reform was condemned by human rights campaigners as "horrific," "unconscionable" and "discriminatory" against LGBTQ people.
Barr, whose speech provoked a furor, was accused of "toxic Christian nationalism" and of violating his oath to defend religious liberty for all Americans. Liberal Catholics said his positions were "fire and brimstone" and a "threat to American democracy" because they "demolish the wall between church and state."
Yet the new policy on adoption undid discrimination against Christian agencies. And Barr's speech was a plea for religious freedom against secular intolerance and a well-founded statement of the Christian roots of American culture.
The significance of all this should not be underestimated--not just for Christians, but for Jews and Western culture in general.
Throughout the West, we are living through an eruption of intense political and social turmoil.
This is far more deeply rooted than the controversies of the day over Trump's character or Brexit. It's a civilizational struggle based at root on an onslaught on the Christian foundations of the West and the moral precepts of the Hebrew Bible that underpin them.
The attack on the West has been driven by the combined forces of secularism and Marxist beliefs posing as liberalism, with the aim of creating a new world order in which God is dethroned by mankind, biblical morality is replaced by secular ideology, and truth is subordinated to power.
Moral and cultural relativism have accordingly replaced "what is right or true" by "what is right or true for me." The template of the family as based on marriage between a man and woman has been replaced by "lifestyle choice."
The belief that humans are the pinnacle of creation and have a duty to steward the natural world has been replaced by the pagan belief in the superiority of the natural world over mankind.

The principle that every individual merits equal respect because all are made in the image of God has been replaced by the doctrine that everyone is entitled to the same outcomes as everyone else, regardless of behavior, thus negating moral responsibility for one's own actions. We are even questioning the very basis of what it is to be human.
The erosion of this core cultural identity has given rise to identity politics and a grievance culture in which warring groups fight each other for power and supremacy.
All of these principles under attack are Christian and Jewish ones. The sharpest attacks have arisen from the collision in the public sphere between gay rights and conservative Christian or Orthodox Jewish attitudes.
In both the United States and Britain, Christians have been discriminated against over their opposition to gay adoption or gay marriage. Christian adoption agencies that only place children with an adoptive mother and father have been forced to close, depriving countless children of a loving and stable home.
In Britain, ultra-Orthodox Jewish schools whose religious beliefs mean they never teach sexuality in the classroom are being harassed by education inspectors enforcing laws that require such schools to teach children about gay lifestyles.
In his speech, Barr warned that Catholicism and other mainstream religions were the target of "organized destruction" by "secularists and their allies among progressives who have marshalled all the force of mass communications, popular culture, the entertainment industry and academia."
This secular onslaught, he said, was laying siege to "the traditional Judeo-Christian moral system" of the United States and was responsible for every kind of "social pathology," including drug abuse, rising suicide rates and illegitimacy.
While religion tackled social challenges by stressing personal responsibility, the state merely tried to alleviate "bad consequences."
"So the reaction to growing illegitimacy is not sexual responsibility, but abortion," he said. "The reaction to drug addiction is safe injection sites. The solution to the breakdown of the family is for the state to set itself up as an ersatz husband for the single mother and an ersatz father for the children. The call comes for more and more social programs to deal with this wreckage--and while we think we're solving problems, we are underwriting them."
New York Times columnist Paul Krugman accused Barr of "religious bigotry" and described his words as a "pogrom-type speech." Such critics merely made Barr's point for him about secular intolerance.
Barr was sounding the alarm about a civilization in existential danger. As he stated, biblical precepts are the foundation stones of the West--and they're being knocked away.

The U.S. constitution is self-consciously based on Jewish ideals and the example of the ancient kingdom of Israel. This is why traditional, biblically faithful American Christians stand shoulder to shoulder with the Jewish people and are among the strongest supporters of the State of Israel in the world--more so even than many Jews.
Nevertheless, with some honorable exceptions, Jews tend to downplay this support from Christians.
In part, this is because they suspect that the underlying aim of such Christians is to convert Jews to Christianity. While this is true for some, others merely acknowledge that Jesus was a Jew and support the Jews as a blessed people whose land of Israel was divinely promised to them.
There is, however, another reason why so many American Jews disdain Christian support. This is that they themselves have heavily bought into the secular approach to the world, which has replaced religion by mankind-centered ideologies.
This is particularly unfortunate since these universalist ideologies are inimical to Jewish principles, though many American Jews mistakenly think they embody the Jewish concept of tikkun olam, or the "repair of the world."
They don't realize, therefore, why intersectionality--the doctrine that links groups that consider themselves victims of the so-called white hetero-normative capitalist patriarchy--has made such an enemy of Israel and the Jewish people.
They don't realize that through its animus against Jewish religious principles, seen as the basis of the oppressive power structure known as Western civilization, and against Zionism, seen as the ultimate ethnic colonialist enterprise of that civilization, secular liberal universalism entails a fundamental illiberalism, in addition to a deep intolerance towards biblically faithful Jews and Christians.
They don't realize that this universalist creed they have made into a secular religion is taking an axe to the cultural virtues they themselves take for granted.
In this crisis for Western civilization, the tragedy for these Jews who don't realize the importance of their own culture to that civilization is that they're on the wrong side.
Originally published at JNS.org - reposted with permission.