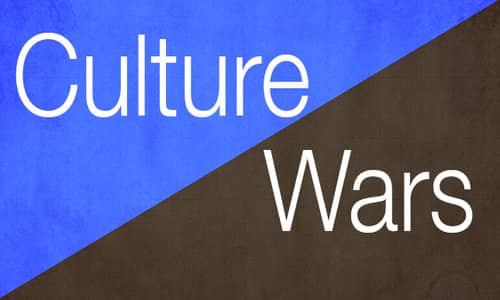 By Jonathon Van Maren/Bridgehead.ca November 11, 2019
Share this article:
Earlier this week, I wrote that things in Canada are moving very, very quickly to the point where the LGBT movement has the power to begin imposing the worldview of the Sexual Revolution on the country--including Christian communities.
Angry, abusive mobs are attempting to de-platform anyone who refuses to say that biological men can become women. Alberta's NDP attempted to shut down Christian schools that refused to host gay clubs (and would have done so if they'd won a second mandate). And in just a few days since I noted that things are getting worse, two more very concerning indicators of where we're at have surfaced.
First, a seventeen-year-old girl was suspended from Stonewall Collegiate high school this week--for disagreeing with the decision to replace the black and red poppy that has been traditionally used to honor veterans with a rainbow poppy that has apparently been created to celebrate the LGBT contribution to Canada's military.

According to the girl -- Natalie -- teachers, counselors, and some of the students began pushing to switch to the rainbow poppy, and she disagreed. She "typed up papers on a computer, printed them off, and taped them up in the halls" to express her respectful disagreement, including a few quotes from some news stories on the issue.
Teachers promptly tore the papers down and took them to the principal, who hauled Natalie into the office and berated her with the vice-principal, yelling at her and accusing her of "hate speech" and "endangering the physical safety of a group of individuals [LGBT students.]"
They were so angry that they brought her almost to tears, but says she "had to be the voice for all those families who were greatly disrespected and offended"--there are several World War II veterans in her own family. She remains suspended for "hate speech," although her father told the media that he was very proud of her for taking a stand.
It is not particularly surprising that expressing even mild disagreement with the LGBT agenda can get you kicked out of a Canadian public school these days, but it is jarring that the controversy revolved around a rainbow poppy, a thing I didn't even know existed until this story broke.
Remembrance Day has always been a uniquely unifying event in Canada, where those of us from all backgrounds can gather to commemorate and honor those who died to fight for freedom overseas. It seems that the LGBT movement cannot even leave that alone, but must forcibly insert themselves into this day of commemoration and demand that people take a side on their ideological agenda.

The second event this week is something I've noted would happen eventually: Conservative party leader, Andrew Scheer, was asked by a journalist, whether or not he thought "homosexuality was a sin."
We are now at the point where socially conservative leaders will be interrogated not on policy, but on what their personal religious beliefs are--and if they refuse to say that they believe specific sexual behaviors or lifestyles are good and moral, than they are promptly pilloried in the press (most of whom don't even believe in the concept of sin to start with, except with the possible exception of "homophobia.")
The media knows that Andrew Scheer has a reputation for being the sort of Christian who actually believes in the teachings of the Church, and thus they want to out him as bigot unfit for office.
Scheer answered the question, but it was not what they were looking for: "We made it very clear during the election, in the last few months and years, that our party is inclusive. We believe in equality of the rights of all Canadians. My personal opinion is that I respect the rights of every single Canadian. And my personal commitment is to stand up -- that is my personal opinion -- my personal commitment to Canadians is to always fight for the rights of all Canadians, including LGBTQ Canadians."
To which the media's collective response was: Okay, whatever, but what do you specifically think of the sexual things they do in the bedroom? Do you or do you not approve of those? Canadians want to know!
The immediate media consensus was that if Scheer refuses to march in a Pride Parade (he has consistently affirmed that he will not) or come out and announce his specific moral and religious approval of homosexuality, then he probably could never be prime minister.
Global News announced that "Scheer's silence on a question of 'sin' a barrier to Conservative election hopes." Maclean's published an op-ed on the homosexuality "question that haunts Andrew Scheer." And the insufferable radio host Charles Adler took the whole thing even farther, tweeting that: "Millions of Canadians are living together without being officially married.

Someone might frame a question this way: 'Andrew Scheer, if 2 Cdns are living together without being officially married, are they living in sin?' The answer is 'NO, I wish to serve Cdns, not judge them.'"
Got that? It is not enough that Andrew Scheer says that the issue of same-sex "marriage" is settled, or that he believes that all Canadians have inherent value. The media response to that is: Yes, but do you approve of what they are specifically into, sexually speaking?
The LGBT movement and their media puppets now demand that the state come into the bedroom and remain there to applaud any and all goings-on. It doesn't matter that millions of Canadians have the same moral beliefs on sexual matters that Scheer does, including Muslims, Sikhs, Hindus, and Orthodox Jews.
Trudeau and Singh don't get the same questions because the media knows that they are hypocrites who publicly repudiate non-negotiable tenets of their respective religions, but that Scheer appears to actually believe the teachings of his Church.
I think we may have finally arrived at the point where the media simply reads out Bible verses to Christian politicians and then demands to know whether or not said politician will repudiate those passages, especially those that discuss sexuality.
Western democracies have long rejected the idea of a religious test for office, and grilling politicians on their moral convictions is, as many secular commentators have already noted, deeply disturbing. But as the LGBT movement continues to conquer cultural ground, nothing is safe.
Not Remembrance Day, not our democratic traditions, and, eventually, not our communities. By grilling Andrew Scheer and in their subsequent response, they are sending a loud and clear message: If you still hold to traditional beliefs, you are ineligible to serve the public, and your voice should be eliminated from the public square.
Originally published at The Bridgehead - reposted with permission.