Signs Of The Times: Lesbian Episcopal Priest Made CEO Of National Abortion Group 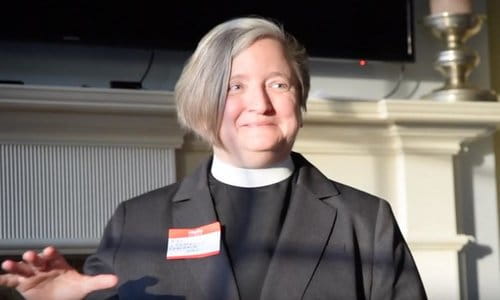 By PNW Staff November 15, 2019
Share this article:
"Abortion providers are some of my personal heroes and modern-day saints," says Episcopal priest and longtime abortion activist Katherine Ragsdale.
With statements like that it is not hard to see why Ragsdale has recently been appointed to serve as the CEO and President of the National Abortion Federation.

Ragsdale had served as the dean of the Episcopal Divinity School in Cambridge, Massachusetts from 2009 to 2015, and was a priest at St. David's Episcopal Church in Pepperell until taking the position at the seminary. She was a member of the board of the Religious Coalition for Reproductive Choice for 17 years, and currently sits on the board of NARAL Pro-Choice America.
In addition to her abortion advocacy, Ragsdale is openly lesbian, "marrying" another female Episcopal priest, Mally Lloyd, in 2011 at Cathedral Church of St. Paul in Boston. The service was officiated by M. Thomas Shaw, the highest-ranking Episcopal leader in Massachusetts.
"God always rejoices when two people who love each other make a lifelong commitment in marriage to go deeper into the heart of God through each other," he claimed, according to a report at the time from LGBTQ Nation. "It's a profound pleasure for me to celebrate with God and my friends Katherine and Mally their marriage today."
In an April 2019 speech at a Kentucky Reproductive Freedom Fund fundraiser, Ragsdale claimed that the Bible says nothing about abortion and that it's dishonest and manipulative to call the human in the womb a "baby."

"They try in vain to take the stigma out of abortion -- but that effort continues, and that is what this new development represents," he said.
Fr. Pavone has for decades helped former abortionists and their staff "deal with the wounds abortion inflicts on them."
"A big part of their healing is to dig themselves out of the many layers of lies that they told themselves to justify the killing they carried out," he said.
"Those lies take many forms: rationalization; intellectualization; and here, in the example of False Prophet Ragsdale's leadership, 'spiritualization.' And the lies by which spiritual and biblical language attempt to justify murder are among the most damaging to those who fall captive to them."