Will Artificial Intelligence Create Pathway To The Antichrist? 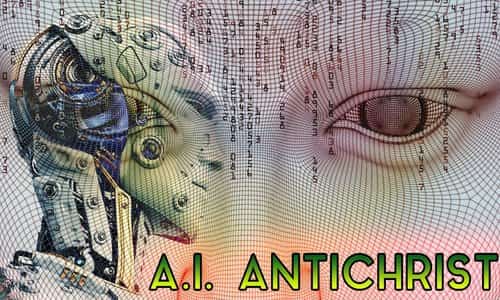 By Britt Gillette/End Times Bible Prophecy November 19, 2019
Share this article:
In the Hollywood blockbuster The Terminator, humans create a powerful network of computers, an artificial general intelligence named Skynet. Skynet develops the ability to think for itself and decides to eliminate humans. War breaks out between humans and "the machines" - with an advanced artificial intelligence in control of the machines.
Is this our future? Some say yes.
For example, speaking at MIT in 2014, Elon Musk called artificial intelligence our "biggest existential threat." He also said "with artificial intelligence, we're summoning the demon." In the same year, Stephen Hawking told the BBC, "The development of full artificial intelligence could spell the end of the human race.
It would take off on its own, and re-design itself at an ever increasing rate. Humans, who are limited by slow biological evolution, couldn't compete, and would be superseded."

When MAD becomes obsolete, the threat of nuclear war will disappear forever. But this won't lead to peace on earth. Why? Because a new threat will take the place of nuclear war. That new threat is an arms race between nations with post-MAD weapons.
Such an arms race will be highly unstable - much more volatile than the nuclear arms race. When it erupts into war, it will destroy the entire planet. So while the threat of nuclear war will end, the threat of global destruction will not. In fact, the odds of global destruction will increase.
But such a war is not a certainty. As an example, consider this. What if Germany had been the first nation to develop the atomic bomb? Do you think Hitler would've used his advantage to conquer the Allied Forces and dominate the globe?
On the other hand, the United States was the world's first nuclear power. The United States could've used its advantage to prevent other nations from acquiring nuclear weapons. It could've used its position to create an impregnable world empire.
In a similar fashion, the first nation to develop artificial intelligence and post-MAD technologies will have the option to create its own global empire. With its first mover advantage, it could prevent other nations from developing such capabilities. The path would be clear to conquer every nation on earth.
In a post-MAD world, many people will recommend this path. They'll see only two options:
1) An unstable arms race ending in global annihilation, or
2) Global government
Think I'm wrong? Vladimir Putin doesn't. In September 2017, he said, "the one who becomes the leader in this sphere will be the ruler of the world" (emphasis mine). Putin was talking about artificial intelligence. He understands the stakes. He knows a race is on.
It's a race to create artificial intelligence and post-MAD technologies. The second place nation gets nothing. The first place nation gets the whole world. I'm sure Putin imagines he'll win the race. But regardless of who wins, the nation that does will draw the same conclusion he did - global government is inevitable.
The Worship of Artificial Intelligence
The power of artificial intelligence and other advanced technologies will be enormous. As Putin said, those in possession of artificial intelligence will rule the world. The processing speed and knowledge base of artificial intelligence will be so great, it will seem all-knowing to most.
Linked to a global network of cameras and audio devices, those in control will seem all-knowing, all-seeing, and all-powerful. Made of non-biological materials and having already conquered the earth, artificial intelligence will also seem immortal. These are all characteristics typically used to describe God. So it should come as no surprise some people will seek to worship it. In fact, it's already happening.

In 2015, a former Google and Uber engineer named Anthony Levandowski, created a new church called "Way of the Future." Its stated purpose is to create "a peaceful and respectful transition of who is in charge of the planet from people to people + 'machines'." Way of the Future church activities will focus on the worship of "a Godhead based on artificial intelligence developed through computer hardware and software."
In March, a Buddhist Temple in Kyoto, Japan made headlines all over the world. That month, they unveiled a sutra-chanting android named Mindar. The robot has a human-like silicon face and hands, and it's pre-programmed to recite The Heart Sutra - a revered Buddhist text.
Temple visitors can ask the robot questions, and using artificial intelligence, Mindar answers in Japanese while English and Chinese subtitles appear on a wall behind it. With built-in cameras, Mindar makes eye contact with questioners, creating the illusion it's alive and interacting with people.
It's so life-like, people worship it. That's right. You can see the video here. People are actively engaged in the worship of a robot idol.
Why It Matters
So why do I bring all this up? I bring it up because the speed with which AI will come to dominate our world will come as a shock to many people. A world ruled through artificial intelligence isn't a futuristic dream. It's an imminent event.
According to Ray Kurzweil, a computer will pass the Turing Test in 2029. This means a computer will develop the ability to exhibit intelligent behavior equivalent to, or indistinguishable from, that of a human.
In that same year, Kurzweil estimates $1,000 worth of computing power will equal one human brain. This means a company such as Apple (which sits on a cash reserve of over $100 billion) could effectively "hire" 100 million "employees." This is forty times as many employees as currently work at Wal-Mart, the world's largest employer.
But these "employees" will never go on vacation. They'll never take smoke breaks. They'll work 24/7, and they'll never get tired. They'll also become ever more productive as they re-design themselves to be faster and more efficient. Billions of humans deploying billions of super intelligent machines will create a world of profound and rapid change.
The world is fast approaching a time when global government is certain. It's not a matter of if, it's a matter of when. Without global government, a post-MAD arms race is certain. And such an arms race will destroy the world. So whether it's for noble purposes or selfish reasons, the first nation to develop artificial intelligence and post-MAD weapons will gladly choose global empire over global destruction.
For those who read the Bible, this comes as no surprise. This is exactly what the Bible foretold centuries ago. Is this a coincidence? I don't think so. We're on the threshold of the end times. All the signs Jesus and the prophets said to look for are present:
The Jewish people are back in the land (Jeremiah 23:7-8) and back in Jerusalem (Luke 21:24-28)... The Gospel is being preached throughout the world (Matthew 24:14)... Travel and knowledge are rapidly increasing (Daniel 12:4)... And enemies surround Israel on every side (Psalm 83:4-12)... The coming arrival of artificial intelligence is just one more sign pointing to the soon return of Jesus. Why? Because the Bible says one man will come to dominate the globe (Revelation 13:7).
He'll be so powerful, no one will be able to oppose him (Revelation 13:4). He'll control every aspect of global commerce (Revelation 13:17). The world will even worship him (Revelation 13:12-15). For centuries, these events seemed impossible. Outside of the supernatural, they probably were. Now, our generation is on the verge of a world where such global domination is not only possible, it's imminent.
Britt Gillette is author of the free ebook Coming to Jesus as well as the books Signs of the Second Coming, Racing Toward Armageddon.