The Islamic States Of America: One Nation Under Allah 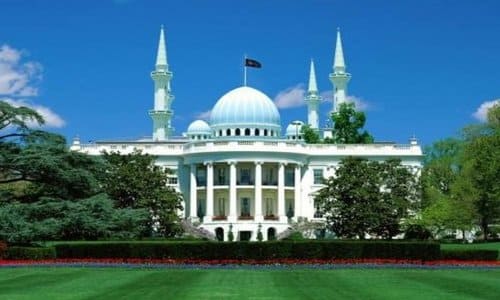 By Rev. Mario Alexis Portella November 22, 2019
Share this article:
Could you imagine in the year 2040 what used to be the White House is now the White Mosque and the flag fluttering above the U.S. Capitol is not the Stars and Stripes but one emblazoned with a crescent and star? Chants of "Allahu Akbar" (Allah is the Greatest) rise from inside the building where U.S. lawmakers meet and the Super Bowl is being played at Ayatollah Khomeini Stadium.
Allah's divine mandate to the Prophet Muhammad has been fulfilled in America: "I have been ordered by Allah to fight against the people until they testify that none has the right to be worshipped but Allah and that Muhammad is Allah's Messenger."
Such provocatives were part of Robert Ferrigno's novel Prayers for the Assassin (2006) and a documentary-style movie, obtained by The Washington Post, outlined ten years ago by Stephen Bannon that envisioned radical Muslims taking over the country and remaking it into the "Islamic States of America."
"The road to the establishment of an Islamic Republic in the United States starts slowly and subtly with the loss of the will to win," the outline reads. "The road to this unique hell on earth is paved with the best intentions from our major institutions. This political/accommodation/appeasement approach is not simply a function of any one individual's actions but lies at the heart of our most important cultural and political institutions."

Daniel Pipes wrote in 2004 that the hardest thing for Westerners to understand is not that a war with militant Islam is underway but that the nature of the enemy's ultimate goal, which is to apply the Islamic law (the sharia) globally. In U.S. terms, it intends to replace the Constitution with the Qur'an.
Pipes went on to say that "over the last 40 years, small groups of devout Muslim men have gathered in homes in U.S. cities to pray, memorize the Qur'an and discuss events of the day. But they also addressed their ultimate goal, one so controversial that it is a key reason they have operated in secrecy: to create Muslim states overseas and, they hope, someday in America as well.
The Muslim Brotherhood members [already in the U.S.] emphasize that they follow the laws of the nations in which they operate. They stress that they do not believe in overthrowing the U.S. government, but rather that they want as many people as possible to convert to Islam so that one day -- perhaps generations from now -- a majority of Americans will support a society governed by Islamic law."
In June 2015 the Center for Security Policy found that 51 percent of Muslims in the United States stated that "Muslims in America should have the choice of being governed according to sharia." Their poll also showed that 20 percent of American Muslims believe that the "use of violence in the United States is justified in order to make sharia the law of the land;" 25 percent of them stated that violence is acceptable to punish those who offend Islam.
Over half of America's Muslims believe that sharia should be the law of the land! A fourth of American Muslims condone violence for drawing a cartoon of Muhammad. This is the new jihad led by Islamists -- while the term is interchangeable with the term Muslim, an Islamist is one who actively or passively supports Islamic nationalism and a sharia-based society, whether through political or violent means -- in America.

I am sure that many who read this post will say, "This cannot and will never happen in America." To that I respond, "Look what is happening around you." Just last month the U.S. Supreme Court denied a petition -- if four of the nine Justices feel the case has value, they will issue a writ of certiorari: a legal order from a high court for a lower court to send the records of the case to them for review -- presented by the Thomas More Law Center (TMLC), to hear Wood v. Arnold, a case brought by Caleigh Wood, a Christian student in 11th grade at La Plata High School in La Plata, Maryland. Wood refused to take part in a school exercise she felt would deny her faith "by making a written profession of the Muslim conversion prayer known as the shahada - "There is no god by Allah and Muhammad is the Messenger of Allah."
The TMLC argues the school violated the First Amendment's Establishment and Free Speech clauses when it ordered Wood to do an assignment that she could not complete without violating her Christian beliefs. The teacher then gave her a failing grade. This is not just a violation of the First Amendment but an ongoing, albeit subtle, diffusion of Islam in our Western society.
Islamists seeking our Islamization have also gained support from our lawmakers. As reported by the Clarion Project, on November 9 at the Council of American-Islamic Relations (CAIR) 25th Anniversary Gala event, Muslim Brotherhood-linked boasted that "120+" members of Congress had sent them letters of support. The list was published by the Investigative Project on Terrorism, along with the letters of support. Among the names were Democrat presidential candidates Cory Booker, Kamala Harris and Amy Klobuchar. Ninety-seven out of the 100 names on the list were Democrats; three were Republican.
Getting politicians and the mainstream media to give terrorists and certain rogue regimes prime-time attention has distracted us from confronting the true Islamic threat. In other words, Islamists or, as William Kilpatrick classifies cultural-jihadists, have successfully diverted attention away from the protagonists of those who are subtly Islamizing our society.
Out of concern of Muslim terrorists entering the U.S., Trump implemented a 90-Day Travel Ban that was to "temporarily" bar travelers from Iraq, Iran, Sudan, Somalia, Syria, Libya and Yemen. Yet none of those countries is the birthplace of terrorists who committed recent attacks in the United States connected to extremist Islamist ideology, unlike Saudi Arabia, Qatar, Egypt and Pakistan.
Because certain countries that should have been on the list but were not, Saudi Arabia and Qatar in particular, like a Trojan Horse, Islamists have been able to  infiltrate the U.S. as they have already done in "Christian" Europe. Consequently, they have been creating an environment of receptivity and understanding for the next generation of Americans to accept their sharia-based lifestyle.
We see this, for example in the field of education, where Saudi money has financed institutions alongside multitudes of other Islamic organizations across the world and within the United States (80 percent of 1,200 mosques operating in the were built after 2003 were built by them). Qatar's equal vision for America is being peddled through our children's classrooms, targeting a pliable population and one with a long shelf life.

A quotation I continually refer to as a warning of the Islamic invasion is that of the late Archbishop Marcel Lefebvre who had said: "As long as Muslims are an insignificant minority in a Christian country, they can live on friendly terms, because they accept the laws and customs of the country that receives them.
But as soon as they become numerous and organize, they become aggressive and try to impose their laws, which are hostile to [Western] civilization." As already in numerous major European cities, sharia-controlled areas are arising; such is the case in Dearborn, Michigan, which is America's biggest Muslim 'NO-GO Zone'.
Although Islamists are still small in number, their political clout is enormous. They (CAIR) even recently coerced President Trump to cancel the annual banquet of ACT for America -- a nationwide grassroots group, founded in 2007 by a Lebanese Christian immigrant journalist Brigitte Gabriel, that educates the public about radical Islam -- at his own Mar-a-Lago Club in Palm Beach, Florida, on November 7.
The would-be Islamic takeover of the United States within this century may seem far-fetched, but that is what is presently happening in Christian Europe. True, the latter has to deal with an unprecedented flow of immigration from the Muslim world; the U.S. to a much lesser degree because of its natural barriers of the Atlantic and Pacific Oceans. America, however, is equally facing a demographic collapse.
Apart from the observance of polygamous marriages, the fact that Muslims for the most part do not practice abortion or artificial contraception, they are increasing in number.
Consequently, Islamists are inserting themselves in key governmental and NGO positions getting the rule of law to favor them. For whatever reason, this nescience has convinced numerous Westerners to embrace Islam, failing to see it for what it truly is: a political entity with the global end to Islamize society: It is He [Allah] Who sent His Messenger with the guidance and the religion of truth, that He may exalt it above every other religion. Allah suffices as witness.  -- Sura 48, 28
While imams have been invoking Allah in the House of Representatives, please God, the United States of America will never have to pledge "One nation under Allah," as students at Rocky Mountain High School in Fort Collins, Colorado, were coerced to recite in 2014, or like those of the Pine Brook High School in New York in 2015.
Yet because of the refusal to admit that our culture and moral standards were shaped by Judeo-Christian beliefs as expressed in the Declaration of Independence,  individualistic secularism -- this is not what the separation of church and state entails as proclaimed by U.S. First Amendment -- has superseded our once abundant Christian roots, giving way to Islam.
Kilpatrick says: "No matter how you parse it, it's difficult to read "Laws of Nature and of Nature's God," "endowed by their Creator," "appealing to the Divine Judge of the World," and "a firm reliance on the protection of Divine Providence" as an endorsement of secularism," let alone Islam.
If our dormant approach to our religious background and openness to Islam persist, the "Islamic States of America" may not be too far-fetched.