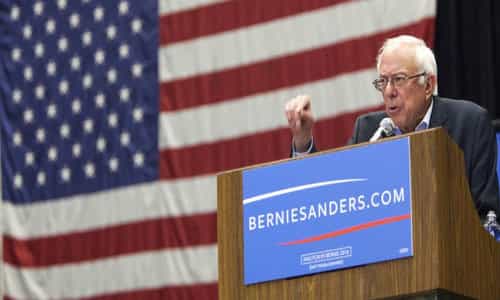 Dershowitz, a fierce defender of Israel and avowed supporter of the Democratic Party, was referring to Arab American Institute (AAI) President James Zogby, whom Sanders tapped on Monday to help draft party policy.
Dershowitz, who said he's debated Zogby on numerous occasions, explained why he is "not surprised" that the senator from Vermont contending for the Democratic nomination picked him to fill such an influential position. "Bernie Sanders is an ignoramus when it comes to the Middle East, and he is very strongly biased against Israel. He gets his information from hard-Left, anti-Israel sources, and he doesn't think for himself," he said.
Regarding another of Sanders' anti-Israel appointees to the committee -- philosopher Cornel West, a BDS proponent who wrote that the crimes of Hamas "pale in the face of the US-supported Israeli slaughter of innocent civilians," and accused President Obama of being "most comfortable with upper middle-class white and Jewish men who consider themselves very smart, very savvy and very effective in getting what they want"- Dershowitz said, "Putting two Israel-bashers on the committee risks dividing the Democratic Party over an issue on which they've always been united."
According to a Morning Consult poll published Tuesday, presumptive Democratic nominee Hillary Clinton is only ahead of Sanders by six percentage points. Sanders, Dershowitz said, "poses a tremendous threat to Clinton's election, and she should fight tooth and nail to keep the Democratic platform supportive of Israel."
This is not, according to Dershowitz, because Sanders "will ever be president," but due to his being "more dangerous as a losing candidate than he would be if he were to win the nomination, since if he did, he would be overwhelmingly defeated in November. As a loser, on the other hand, he threatens to push Clinton into positions that will make it much harder for her to win the general election."

In other words, said Dershowitz, "I'm not worried about Sanders as a winner; I'm worried about him as a loser. And I will do everything in my power to see that he is marginalized in the Democratic Party, particularly on foreign policy, about which he knows nothing."
In a blog post published by AAI, Zogby called American and Israeli support for Israeli Prime Minister Benjamin Netanyahu, "shameful," claiming that "Israeli society is on a slippery slope -- becoming increasingly tolerant of racist violence." In a 2010 Huffington Post article, Zogby compared the "plight of the Palestinians" to that of the Jews during the Holocaust.
In an interview with Foreign Policy on Monday, Zogby -- who has served on the executive body of the Democratic National Council for the last decade -- said the language used by the Democratic Platform will have to adopt a more "toughened" approach against Israel and include the word "occupation" in relation to Israeli presence in the West Bank. He also hopes to increase the party's support for Palestinians.
Originally posted at Algemeiner.com - reposted with permission