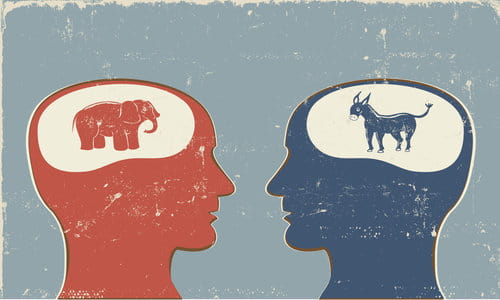 By Mac Slavo/SHTFplan.com December 02, 2019
Share this article:
The bias against those who are not politically affiliated similarly is the last acceptable form of discrimination. It's now okay and accepted by the masses, to treat other human beings as less than if they disagree with you on politics.
One new study is showing that most are embracing this type of discrimination with extreme fervor. This discriminatory behavior thrives in the one area where it remains socially acceptable to judge people based on shared attributes: political affiliation.

Politics remains one of the few personal characteristics not protected by equal opportunity hiring laws, and if this study is any indication, lawmakers will want to get on top of that quickly.
Belief in certain political values is akin to belief in a religion. It's all based on opinion and discrimination is still discrimination, even if you label it "politics".
We all know the media has been trying to brainwash us with government-approved opinions for years now, and those who don't accept their brainwashing willingly are being discriminated against.
Recent examples:
Biden's Campaign Asks Media To SILENCE Opposing Views And No Longer Book Giuliani
Presidential candidate Joe Biden's campaign has taken on an authoritarian and Orwellian tactic. The democrat's campaign has asked media outlets to no longer book Donald Trump's personal lawyer, Rudy Giuliani, silencing the opinions, views, and commentary from the opposing side of the "Ukrainian president impeachment" rhetoric.
According to a report by Market Watch, Biden campaign officials Anita Dunn and Kate Bedingfield wrote a letter to network news presidents, chief anchors and the executive producers of the Sunday shows for ABC, CBS, NBC, MSNBC, CNN, and Fox News Channel.
SILENCED: YouTube Censorship Ramps Up As 17,000 Channels Removed
YouTube has been criticized by the political establishment for not censoring enough of their users, so like cattle falling in line, the company removed over 17,000 channels and 100,000 videos for "hate speech." They used their definition and the political elitists' definition of hate speech: things said that don't support the progressive left view of the world.
Many people have found themselves losing job positions for posting the wrong particular viewpoint on Facebook or other social media. Now any clues on your political affiliation mean you wont be hired in the first place.

Shared political ideology outweighs seemingly more important factors like professional qualifications in hiring decisions, researchers from Clemson University and the University of Kansas confirmed in a study published this month in the Journal of Applied Psychology. Unchecked, this kind of discrimination is liable to produce powerful echo chambers, in which groupthink eventually becomes a prerequisite for employment.
Study participants readily picked a job candidate with whom they shared a political affiliation over a more qualified candidate without that affiliation when presented with Facebook profiles containing clear indicators of the prospective hire's political alignment.
These might include statements about leading a campus Democrat or Republican group, or party symbols like the Democratic donkey or GOP elephant. The closer the participant, acting as a recruiter, identified with a party, the higher ratings they gave to candidates who touted their membership in that party - qualifications were nigh on irrelevant.-RT
More Than HALF Of Americans Want The Government To CENSOR Speech
It is horrifying that over half of millennials believe "hate speech" should be against the law, though no definition of "hate speech" was given (and indeed the definition tends to vary given the time and place) during the survey. Most of those who want a ban on such speech consider jail time an appropriate penalty.

And it isn't just the free speech of their fellow Americans that some people want to be censored.  They also want what is essentially, state-owned media.  In fact, 57 % of respondents support government action against "newspapers and TV stations that publish content that is biased, inflammatory, or false," with nearly half of those agreeing such offenses should carry a jail sentence.
That means the government will get to decide the official narrative, and those who have evidence otherwise or dare to speculate against the government would be forced to spend time in jail.
Unfortunately, instead of learning from history, people are actually asking for a repeat of Nazi Germany or the gulags of the Soviet Union.
There is real irony in the mainstream media's role in pushing for this discrimination too.  The media environment has actively encouraged this polarization. It gets clicks as it drives destructive wedges into society while at the same time condemning any other form of attribute-based preference as "unthinkable bigotry."
Welcome to the U.S.S.A. Where groupthink is our future.
Originally published at SHTFplan - reposted with permission.