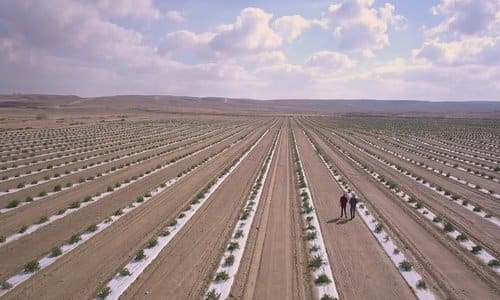 By Rami Dabbas/Algemeiner.com December 03, 2019
Share this article:
This isn't science fiction. This is fact. Israel is one of the few nations on earth that either has or can develop solutions to end world hunger -- something that affects millions upon millions of people.
All across my region in particular (speaking of Asia and Africa), nations are clamoring for advanced farming techniques and technology to offset material shortages, low soil fertility, water scarcity, and energy depletion -- all of which are the result of unprecedented population growth.

Israel has developed advanced agricultural techniques, and, despite its small size, become a global leader in the field through innovations such as drip irrigation, which has truly made the desert bloom. Similarly, the Jewish state has developed grazing systems and new approaches to the distribution of livestock, thus leading to groundbreaking increases in dairy productivity.
Evidence of Israel's excellence in these fields can be seen in the number of foreign specialists (in particular, of late, from India) coming to Israeli universities and research centers to gain the knowledge and experience needed to help their own peoples.
This is even more of an achievement when one considers that Israel's universities, research centers, and government are today far more focused on the hi-tech industry than on agriculture. Most of Israel's best and brightest gravitate towards software development and defense technologies -- unfortunately slowing the advancement of agricultural technologies so needed by the rest of the world. Even so, Israel remains home to more than 200 advanced agricultural research centers.

Fortunately, with so many countries sending delegations to learn form Israel's agricultural experts, some of that hi-tech brainpower is being directed towards this critical field. Much of the world, from India to Mongolia to the West Coast and Horn of Africa, looks to the Jewish state to provide the solutions they so desperately need.
Since the 1950s, Israel has succeeded in reclaiming most of its ancient lands from the deserts and swamps, and turning them into green areas suitable for cultivation and grazing. At the same time, primarily through MASHAV -- the Israel Foreign Ministry's Agency for International Development Cooperation, the Jewish state has advanced agricultural methods and standards throughout the world.
And what of the neighboring Arab states?
In my home country of Jordan, the agricultural sector suffers from many complex and sometimes fatal problems. Israel and Jordan are officially at peace, and the Jewish state has the ability to green the deserts of Jordan, if only that peace were warmer.

Just look at what Israel did with the leased enclaves of Naharayim and Tzofar (which Jordan this year reclaimed rather than renew the leases to Israeli farmers). Both of these enclaves are filled with lush green farmlands, while the surrounding Jordanian-controlled areas remain arid and yellow. If we could only truly cooperate, Jordan would reap the benefits of Israeli technology and agricultural know-how.
The same is, of course, true for the other Arab states. If only they would make peace with Israel, so many of their problems related to hunger and lack of water could be solved -- just as Israel is doing for so many countries in Africa and other parts of Asia.
Originally published at Algemeiner.com - reposted with permission.