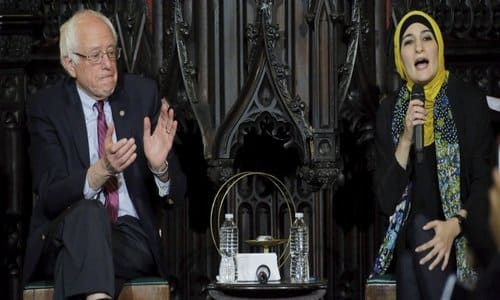 By Algemeiner.com December 06, 2019
Share this article:
A top pro-Israel Democratic group has called out presidential candidate Bernie Sanders for failing to disassociate himself from prominent supporter Linda Sarsour following her latest antisemitic outburst.
"As Democrats committed to progressive values, we wish we could be praising Senator Bernie Sanders today for standing up to antisemitism," Democratic Majority for Israel President Mark Mellman said on Thursday.
"Instead, we are deeply saddened and completely appalled to see Senator Sanders standing with antisemitism by remaining silent and retaining Linda Sarsour as an 'official surrogate' of his campaign after she made yet another antisemitic statement."

"Friday, at the American Muslims for Palestine Convention, Linda Sarsour claimed that Israel is 'built on the idea that Jews are supreme to everybody else' -- a vicious, antisemitic lie that calls upon millennia-old stereotypes of Jewish superiority to undermine Israel and Zionism," Mellman explained. "In fact, Israel is built on the idea that every people, including the Jewish people, is entitled to self-determination."
"Sarsour sought to evade the controversy by issuing a non-apology for creating 'confusion,'" he continued, referring to a Twitter thread published by Sarsour on Tuesday.
La competitiva industria de los casinos en línea ofrece muchas opciones fantásticas para los jugadores, pero en esta revisión la hemos reducido a los ocho casinos online Argentina. ¿Cómo decidimos exactamente que estas son las mejores opciones? Los hemos juzgado en función de criterios estrictos teniendo en cuenta los juegos, las bonificaciones, el servicio al cliente y mucho más.
"In fact, she was crystal clear, and she did not apologize for her vicious antisemitic statements, for trafficking in antisemitic language and stereotypes, or for maligning the identity of millions of American Jews."

"She posted another tweet, defending her statement, labeling criticism of it 'a further attempt to paint the left in USA & UK as antisemitic,' apparently associating herself with British Labour leader Jeremy Corbyn, who is regarded as antisemitic by a majority of British voters and by 86% of British Jews," Mellman noted.
"Senator Sanders acknowledged recently in an op-ed that 'some criticism of Israel can cross the line into antisemitism,' and he assured readers saying, 'I will always call out antisemitism when I see it,'" Mellman recalled.
"It is deeply disheartening to see him remain silent in the face of unadulterated antisemitism coming from an official of his campaign."
Originally published at Algemeiner.com - reposted with permission.