NATO - Why Is Turkey On The Inside And Israel On The Outside? 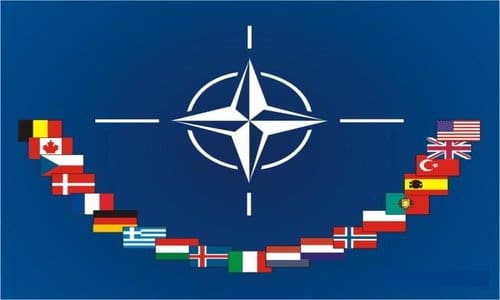 By Jonathan Tobin/JNS.org December 06, 2019
Share this article:
President Donald Trump thought the 70th anniversary celebration of the founding of the North Atlantic Treaty Organization (NATO) held earlier this week was going to be a political triumph that would help distract Americans from the attempts by Democrats to impeach him.
Unfortunately for him, the summit will primarily be remembered for a hot mic moment in which the various heads of government commiserated about their distaste for the president.
But Trump's problems at the conference weren't limited to his being openly mocked by his foreign counterparts. Far more important was the widely applauded statement of French President Emmanuel Macron who said that what he termed the "loss of American leadership" had led to the "brain death" of NATO.

While that remark made headlines, the irony is that Macron actually agrees with Trump--and disagrees with many other NATO leaders--that the primary focus of the alliance ought to be combating terrorism rather than on stopping Russian expansionism, as it was in the past when the opponent was the Soviet Union.
Both Trump and Macron are right about that. But if NATO members and foreign-policy pundits could get past their obsessive antipathy for the president of the United States, they'd see the alliance's real problem as it heads into its eighth decade is not Trump's transactional view of NATO, which has led him to rightly demand that other members increase defense spending and pay their fair share of the cost of their defense--primarily the burden of American taxpayers at present.
Nor is it the way the president has, at times, sounded skeptical about America's Article 5 obligations to defend other nations under the NATO treaty. It's that its Cold War origins and its Eurocentric focus have blinded the alliance to the fact that a full-fledged member of the alliance--namely, Turkey--has mixed sympathies with respect to the fight against terrorism, and that it continues to exclude from its membership the State of Israel, one of the world's key players in that battle.
As apostas esportivas no Brasil são populares, embora o governo brasileiro proíba a maioria das formas de apostas esportivas. Algumas vezes no passado, o governo suspendeu as restrições ao jogo, mas se mostrou tão popular que o Senado brasileiro impôs uma proibição geral.
NATO is still needed to act as a check on Russian President Vladimir Putin's desire to reassemble the old tsarist empire and defend the independence of Eastern European states, as well as those that were captive nations inside the Soviet Union.
Trump has actually done more to aid those countries than President Barack Obama ever did. But his obsequious attitude towards Putin, which raises doubts about America's commitment to stopping Russian aggression, has understandably distracted the public from the substance of the administration's policies.

Yet Trump and Macron are right that thinking about NATO solely in terms of the geostrategic conflict with Russia makes it irrelevant to the ongoing and arguably far more serious struggle against Islamist terror. That's NATO's real job in the 21st century. It's also why its current structure with Turkey on the inside and Israel on the outside looking in remains a huge problem.
Turkey joined NATO, alongside its historical antagonist Greece, in 1951--two years after the alliance was founded. Admitting Turkey made sense at that time for two reasons. One was that its strategic position bordering the Soviet Union made it essential to any effort to contain Moscow's expansionist drive to both undermine the stability of the postwar world and to spread communism. Post-war Turkey was also a thriving secular democracy whose governing parties were interested in becoming part of Europe, rather than focusing on the lost glories of the Ottoman Empire.
But contemporary Turkey is a very different country. In the last two decades, the rise of the AKP Party and its leader, Recep Tayyip Erdoğan, has transformed an avowedly secular democratic republic into an Islamist authoritarian state.
As such, it has turned away from NATO's mission of defending European democracy. It plays both ends against the middle with respect to Russia by buying a missile-defense system from Moscow and refuses to coordinate security policy with the United States and NATO.
Erdoğan also criticizes NATO for being insufficiently concerned with terrorism. But by that he is referring to the understandable reluctance of the alliance's members to share his enthusiasm for Turkey's war on the Kurds. The Turks have attempted to wipe out Kurdish identity inside of their borders and regard Kurdish nationalism elsewhere as a threat to its own sovereignty, despite the sufferings of this group of people.

There are, in fact, Kurdish groups considered to be terrorists, but to regard all Kurdish nationalism in that way is deeply wrong. And for a country like Turkey, which has consistently backed the terror group Hamas, the notion that it represents a bulwark against terror is absurd.
At the same time, the United States and NATO rely heavily on Israel when it comes to counter-terrorism. It's no secret that the intelligence information shared by Israel is vital to U.S. security and that of the alliance. Israel coordinates closely with the Americans and Western Europeans when it comes to the battle against ISIS and the threat from Iran.
The joint exercises that America and some other NATO allies conduct with Israel are also an indication that even though the Jewish state is not part of a formal alliance structure like NATO, it is an essential element in the defense of the West. And yet Erdoğan was feted, along with the rest of the NATO leaders, at the anniversary summit in London while Israeli Prime Minister Benjamin Netanyahu was pointedly excluded.
Talk about scrapping NATO--whether it comes from "America First" neo-isolationist Trump supporters or leftists who view the projection of U.S. power as inherently evil--are equally wrong. But if NATO is to continue to play the role in defending democracy that its founders intended, then it will have to change. It can start by figuring out a way to sideline Erdoğan's Turkey, while either formally or informally bringing Israel inside the alliance.
Originally published at JNS.org - reposted with permission.