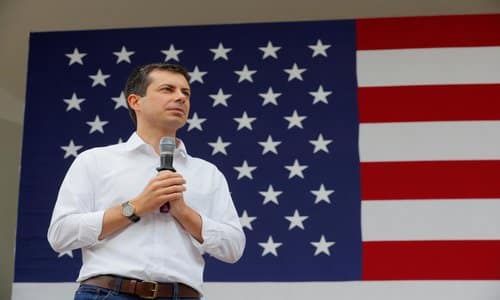 By Jonathon Van Maren/Bridgehead.ca December 06, 2019
Share this article:
With the exit of Kamala Harris from the race for the Democratic presidential nomination, America has been given a reprieve from an utterly amoral and narcissistic politician who will do anything it takes to get to the top.
I say reprieve only because I'm sure her campaign for the vice presidential nomination is already underway. She is also ruthlessly ambitious: Remember, this is the woman that took Planned Parenthood cash to fund her senate campaign, and while serving as California Attorney General ordered a raid on the home of pro-life journalists who investigated the abortion giant. She also began prosecuting them.
Harris was the candidate that worried me most, but that isn't saying much. All of the top-tier Democratic presidential candidates have stated that they will fund Planned Parenthood, force taxpayers to fund abortions both in the United States and abroad, and codify abortion throughout all nine months of pregnancy into federal law to ensure that Roe v. Wade will live to kill another day even if the Supreme Court decides to overturn the ruling.

Pete Buttigieg even suggested that Christians should embrace abortion until birth with a bizarre take on a cherry-picked quote from Scripture.
"[Pro-life Christians] hold everybody in line with this one, kind of piece of doctrine about abortion, which is obviously a tough issue for a lot of people to think through morally," Mayor Pete told an interviewer. "Then again, there's a lot of parts of the Bible that talk about how life begins with breath, and so even that is something that we can interpret differently."
With that sort of exegesis and his resulting conviction that a baby sucking her thumb in the womb can be legally dismembered, Buttigieg clearly didn't have a particularly tough time thinking through this moral issue. He simply twisted the Bible to support his (or the Democratic Party's) position.
As apostas online no Brasil explodiram na última década, à medida que a tecnologia melhorou e a Internet evoluiu de um luxo para uma necessidade.
This is where Pete Buttigieg may be a more dangerous candidate than most Christians realize. Social conservatives are used to voting against candidates who are generally uncomfortable speaking about religion, and are often Scripturally illiterate. Buttigieg, on the other hand, is attempting to weaponize a new, progressive version of Christianity against those who vote to protect life in the womb, religious liberty, and the natural family.
In fact, in his latest statewide South Carolina TV ad, Buttigieg quotes the Lord Jesus to support his policy platform and attack Christian GOP voters. The ad opens with him saying: "Whatever happened to 'I was hungry and you fed me, I was a strange and you welcomed me?"
Buttigieg has multiple reasons to claim the Christian mantle. One is the fact that black voters, who cast their ballots overwhelmingly for the Democratic Party, have awarded him a support level hovering somewhere around zero--and polling indicates that his sexuality has something to do with it.
Buttigieg has made much of his "marriage" to Chasten Buttigieg, and while the progressive press fawns all over the potential "First Gay Couple" (even publishing stories about Chasten's difficult past that his family claims are lies), it turns out that black voters, who are quite socially conservative despite their voting patterns, see it as a "barrier." Thus, Buttigieg has to convince black churchgoers that he's one of them, with a rainbow twist.

The second reason Buttigieg has embraced the Christian mantle is that he is working to shift the Overton Window and change the traditional narrative. He has realized that the Democrats are perennially hamstrung when it comes to religious voters, and has decided that rather than ceding these voters to the GOP, he's going to make the bold case that voters who believe in the biblical definition of marriage and the protection of life in the womb aren't real Christians.
Instead, real Christians are upstanding people like Chasten and himself--Buttigieg has stated explicitly that his partnership has "moved me closer to God."
To accentuate this point, Buttigieg is fond of pointing out that Trump's track record on marriage isn't particularly stellar. "It's something that really frustrates me because the hypocrisy is unbelievable," Buttigieg said, referring to evangelical support for Trump. "Here you have somebody who...acts in a way that is not consistent with anything that I hear in Scripture in church." It's a clever move--Buttigieg is positioning himself as an evangelical, and then claiming to be offended by evangelical GOP voters as one of them rather than as an outside critic.
It was clear from the beginning that Buttigieg was going to use a transformed and castrated imitation of Christianity in order to attack his political opponents. In interview after interview, he has targeted Vice President Mike Pence as a Christian undeserving of the title.
"If me being gay was a choice, it was a choice that was made far, far above my pay grade," Buttigieg said. "And that's the thing I wish the Mike Pences of the world would understand. That if you got a problem with who I am, your problem is not with me - your quarrel, sir, is with my creator."
The media, predictably, ate it up.

If this narrative gets traction and the Democrats decide to follow Buttigieg's lead, we may see traditionalist Christians get targeted not simply as homophobes or misogynists or transphobes, but as fake Christians who need to be instructed in what Scripture really says by the likes of Pete Buttigieg, Chasten Buttigieg, and the priests of the progressive Democratic Party.
Instead of being targeted for being Christian, voters may find themselves targeted for not being Christian enough, as defined by the pro-abortion, LGBTQ2S lobbyists of the Party of Death.
And remember: This isn't FDR's Democratic Party anymore. The progressive Left is so full of hatred for anything smacking of orthodox Christianity that Out Magazine and the gay press launched an attack on the Salvation Army--and Pete Buttigieg--this week. What was Buttigieg's crime?
Well, as it turned out, the magazine discovered 2017 photos of the mayor volunteering "for the Homophobic Salvation Army." These "resurfaced photos," Out Magazine thundered to a chorus of agreement, were an unacceptable example of an LGBT person playing footsie with bigots--even if they happen to be bigots who simply feed the hungry and house the homeless.
This is what the progressive perversion of Christianity will look like: All those who disagree with the Sexual Revolution must be crushed. Pete Buttigieg and his pals still believe the wicked must be punished. They just believe that it is traditional Christianity that supplies the wickedness.
Originally published at The Bridgehead - posted with permission.