Muslim Community Patrol: Sharia Law Coming To Community Near You 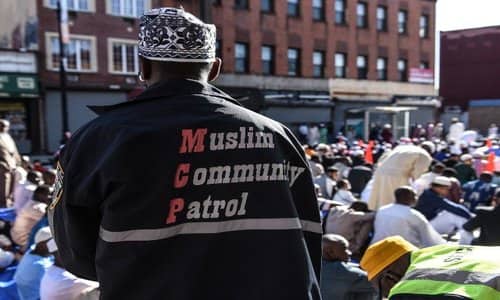 By Clarion Project December 12, 2019
Share this article:
"Bullying" and "gangster-like" tactics have been reported by locals in New York areas where the Muslim Community Patrol & Services operates.
These tactics are beginning to create a backlash against the self-described "civilian patrol organization" among local residents.
The Muslim patrol gained international attention in the fall of 2018 after several of its patrol cars -- which look like New York Police Department (NYPD) cars -were spotted in Brooklyn and Staten Island.

A little digging shows that the Muslim Community Patrol has an underlying agenda: to enforce Islamic sharia law first in the Muslim community and then in American community at large.
The patrol originally said its purpose was to serve as a liaison between Muslims and the NYPD.  But after two consecutive mosque shootings in New Zealand last March, where a gunman live-streamed his murder of 51 Muslims on Facebook, the patrol publicly altered its purpose.
It now describes itself as a law enforcement organization, claiming its goal is to "protect members of the local community from escalating quality-of-life nuisance crimes."
It's precisely that "law enforcement" definition that is now landing the Muslim patrol into hot water with New York City residents, particularly those living in the Brooklyn area of Bedford-Stuyvesant.
"They are bullying people and getting out of their patrol cars looking like gangsters," said one resident, who asked to remain anonymous. "The people in Bed-Stuy don't want them there."

The Muslim patrol originally had a force of three patrol cars when it first formed in November 2018, but it now has seven cars on the streets of New York with the intention of purchasing 23 more cars in the near future.
The Muslim patrol's cars are nearly identical to NYPD patrol cars. Both use Ford Taurus' and have similar decal schemes, colors and emblems.  See image below: 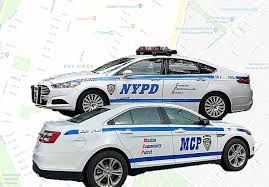 Though the Muslim patrol cars do not have lights on their hoods, they do have emergency flashing lights in the front and back windshields.
"A lot of people can't tell them apart," said the resident.  "In fact, most people think they are NYPD detective cars, especially if they are driving behind you."
Significantly, some Muslim patrol "officers" have been driving their patrol cars with their emergency lights in continuous flash mode, even when not responding to an emergency.
"They never turn them off and people are seeing these lights and thinking [they are] NYPD," the resident said.
The cars also have sirens, which another neighborhood resident says is being used to intimidate people.
"They turn on their sirens when they see non-Muslims park next to a mosque during Friday prayer services," said another resident.
"They get out of their cars and start humiliating these people, telling them they have to move their cars and that they can't park next to a mosque because they're not a Muslim, even though it's completely legal for them to park there," he explained.

In addition, Muslim patrol officers are patrolling sidewalks near mosques and stripping people of their open containers of alcohol.  Though open containers of alcohol are a city violation, an NYPD officer typically resolves it peacefully.
"In some cases, these Muslim patrol officers are kicking the beer out of their hands or yanking it from them and pouring it out on the streets," the second resident said.  "These guys aren't police officers and they don't have the right to take someone else's property and destroy it, even if a person is committing an offense."
"They talk to these people like the ARE the police," he added.  "And a lot of people in the Bed-Stuy community are getting fed up with it.  Some, including the Muslims in the community, are demanding a meeting with the district attorney."
Both residents who spoke up, however, agreed that the NYPD still favors the "services" provided by  Muslim patrol.
"The local captain, he don't care if they're enforcing sharia law.  The police see them as helping them with their jobs."
For an in-depth report by the Clarion Project on the New York Muslim Sharia Patrol please click here.
Originally published at Clarion Project - reposted with permission.

June 16, 2021Lessons From A North Korean Defector: US Schools Have Become Brainwashing Center

Yeonmi Park knows what real oppression looks like. She was born in North Korea and by the age of 13 she had literally witnessed people dr...

June 16, 2021Networks Change Their Toon For Pride Month As Ratings Continue To Tank

There are lots of parents today who wouldn't think twice about sitting their kids down in front of the Disney Channel or Cartoon Network. ...

As America's culture and politics turn sharply toward the surreal, repeated denials of the differences between men and women only serve to...

June 16, 2021Ilhan Omar And The Art Of Not Apologizing

It takes considerable skill to come up with the words to sound just apologetic enough to get your critics off your back, but without actua...

We have been in a low inflation environment for most of the past four decades, and so many Americans don't even have a frame of reference ...

June 12, 2021Has Centralization Of The Internet Become It's Achilles Heel?

For an hour on the morning of June 8, dozens of the world's most-visited websites went offline, demonstrating how cloud computing and mult...

While the trans movement has made enormous gains across the West over the past few years, nowhere has the gender revolution leveled bounda...