The New EU Push For Palestinian Statehood Is Dangerous For Israel 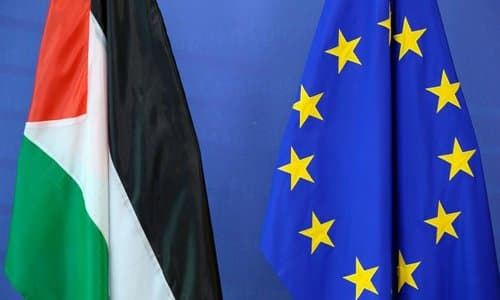 By Yoni Ben Menachem/JNS.org December 16, 2019
Share this article:
Following the U.S. recognition in November of the legality of Israel's West Bank settlements, Luxembourg's Foreign Minister Jean Asselborn is advancing an initiative calling for the European Union to recognize a Palestinian state.
Last week, Asselborn sent a letter to the E.U.'s new foreign-affairs representative, Josep Borrell, and to the 27 E.U. foreign ministers.
In the letter, he argued that the way to rescue the two-state solution was to create a "more equitable situation" policy-wise between Israel and the Palestinians, to which end he urged the European states to hold a discussion as soon as possible regarding the possibility of recognizing a Palestinian state.

Such a move, he said, would not be anti-Israel.
"In no way would it [such steps] be directed against Israel. Indeed, if we want to contribute to solving the conflict between Israel and Palestine, we must never lose sight of Israel's security conditions, as well as of justice and dignity for the Palestinian people," he wrote in the letter.
According to officials in Jerusalem, Israel's Foreign Ministry is preparing to thwart Luxembourg's new initiative. A debate on the issue is scheduled to be held at the meeting of European foreign ministers in January. Regardless of the ultimate outcome, however, the Palestinians are encouraged by this new European direction.
The Palestinians have been demanding for years that the European Union as a body take practical steps towards the recognition of a Palestinian state. While some European parliaments and governments have recognized a Palestinian state, as yet there has not been any unifying European decision on the issue.
However, all European Union member states, with the lone exception of Hungary, condemned U.S. Secretary of State Pompeo's Nov. 18 statement on Israel's settlements.
More than 135 countries in the world, including Russia, China, Eastern European states and Arab and Muslim countries, already recognize a Palestinian state.
As far as the Palestinians are concerned, Asselborn's initiative is an important step, one with the potential not only to determine the European position on President Donald Trump's Mideast peace plan but also to torpedo the possibility of establishing an autonomous Palestinian region only in the West Bank.
The new European initiative comes shortly after the European Court of Justice ruled that all E.U. member states must clearly label products made in the West Bank, eastern Jerusalem and the Golan Heights as having been produced in an "Israeli settlement." This legal process began in 2015 following E.U. directives to exclude products originating from the territories captured by Israel after the 1967 war.

European Union recognition of a Palestinian state and the adoption of Asselborn's initiative will require a unanimous E.U. member vote--but even recognition by lone European countries of a Palestinian state will be considered a Palestinian achievement.
The complex political situation in Israel is delaying Trump's Mideast peace plan, but Israeli politicians are also trying to further the process of annexing the Jordan Valley, a move backed by the Trump administration.
According to security sources in Israel, Jordanian King Abdullah recently sent Israeli Prime Minister Benjamin Netanyahu a communiqué saying that Israeli annexation of the Jordan Valley would result in Jordan suspending its peace treaty with Israel.
Palestinian Authority leader Mahmoud Abbas warned on Dec. 9 in a speech in Ramallah that if Israel decides to annex the Jordan Valley, the P.A., too, will cancel all agreements with Israel.
Meanwhile, the P.A. and European countries alike need Israeli approval for elections in the West Bank and for the participation of eastern Jerusalem residents in such elections.
Senior Fatah member Hussein al-Sheikh announced that the Palestinian Authority has officially appealed to Israel to approve the participation of eastern Jerusalem residents in the elections, while Abbas has said that the P.A. is continuing efforts with European countries to urge Israel to allow elections in the Palestinian territories, as Israel did in 1996 and 2006.
Will the Israeli government allow eastern Jerusalem residents to vote in Palestinian elections after the U.S. recognition of Jerusalem as the capital of Israel?
Israel also has other considerations with regard to the issue, and does not have to comply with the request of European countries to agree to elections in the territories. For instance, in 2006, Israel agreed to elections, and the result was the victory of Hamas. Terrorists won the Palestinian parliamentary vote and forcefully expelled the Palestinian Authority from the Gaza Strip a year later.

Therefore, it should be made clear to European countries that recognition of a Palestinian state prematurely determines what should be the outcome of negotiations and unacceptable to Israel. Israel will not take any steps to advance the idea of a Palestinian state without the issue being agreed upon in negotiations.
The Oslo Accords did not recognize the establishment of an independent Palestinian state and did not stipulate that settlement activity should be stopped; the PLO signed it and must respect it.
Unilateral European recognition of a Palestinian state would only enhance antagonism and would not promote peace. Israel withdrew from the Gaza Strip and received in return for its sacrifice an independent terrorist-controlled entity. Israel cannot be expected to repeat the same mistake in the West Bank.
An independent Palestinian state in the West Bank is a serious danger to Israel's security, especially in light of Hamas's efforts to take control of these territories, so Israel must fight this new European initiative with all its might and try to get it removed from the European political agenda.