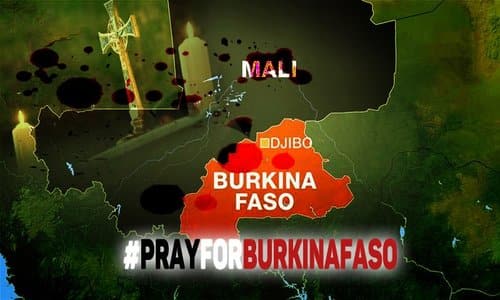 By Raymond Ibrahim/Gatestone Institute December 18, 2019
Share this article:
On Sunday, December 1, 2019, Islamic terrorists raided a Protestant Christian church in Burkina Faso during the service and massacred 14 worshippers. The pastor and several children were among those killed.
This is but the latest of many lethal attacks on the Christian minority of the small nation located in West Africa, a region better known for the persecution of Christians in Nigeria.
Discussing the situation in Burkina Faso — which is approximately 60% Muslim, 23% Christian, and 17% animist or other — the BBC reported that "Jihadist violence has flared in Burkina Faso since 2016.... Fighters affiliated to al-Qaeda and the Islamic State group as well as the local Ansarul Islam [Champions of Islam] have been active in the region."
However, while a total of 12 Islamic terror attacks were registered in 2016, nearly 160 were reported in just the first five months of 2019.

Although the mainstream media habitually downplay the religious element whenever Muslims attack Christians — often by referring to it as "sectarian strife" — attacks in Burkina Faso have become so flagrantly based on religion that even the Washington Post published a report on August 21 titled, "Islamist militants are targeting Christians in Burkina Faso": "A spreading Islamist insurgency has transformed Burkina Faso from a peaceful country known for farming, a celebrated film festival and religious tolerance into a hotbed of extremism."
The report notes that the jihadis have been checking people's necks for Christian symbols, killing anyone wearing a crucifix or carrying any other Christian image. On other occasions, "the armed terrorists challenged Christians to convert or die."
Despite such clear indicators of motive, many in the establishment are sticking to the "narrative": "To my mind," explained Sten Hagberg, a Swedish professor of anthropology at Uppsala University, the attacks have "much more to do with politics and economics than religion."
Meanwhile, for those closer to the ground, "Christians ... are currently being exterminated or expelled from their villages by Muslim extremists," to quote from a September 18 report. "If this continues without anyone intervening," Bishop Laurent, president of the bishops' conference of Burkina Faso and Niger, adds, "the result will be the elimination of the Christian presence in this area and — perhaps in the future — in the entire country."
This would appear not to be an exaggeration. Below are some of the more lethal attacks on Christians in 2019 alone:
June 27: "Unidentified armed individuals entered the village of Bani ... looking for Christians... The militants told everyone to lie down and proceeded to look for Christians by asking for first names or looking for anyone wearing Christian insignia (like crosses). The deadly search yielded four men.... They were all wearing crosses.... When they saw crosses, the assailants singled them out. All four were taken aside and executed." They then moved on to another village, Pougrenoma, where "They also told Christians to convert or risk execution."
June 9 and 10: On Sunday, June 9, in the town of Arbinda, Muslims murdered 19 Christians. On the next day, another ten Christians were murdered in a nearby town. An additional eleven thousand Christians were displaced. "There is no Christian anymore in this town [Arbinda]," said a local contact; "It's proven that they [terrorists] were looking for Christians. Families who hide Christians are [also] killed. Arbinda had now lost in total no less than 100 people within six months."
On Sunday, May 26, armed Muslims stormed a Catholic church during mass and opened fire on the gathered worshippers; four were killed and several others injured.
On May 13, armed Muslims attacked a Catholic procession, slaughtered four Christians and "burned a statue of the Virgin Mary."
On May 12, approximately 30 armed Muslims stormed a Catholic church, slaughtered at least six worshippers — including the officiating priest — and then burned the church to the ground.
On Sunday, April 28, Islamic terrorists stormed a Protestant church and killed six worshippers, including the 80-year-old pastor and his two sons. According to a local, "The assailants asked the Christians to convert to Islam, but the pastor and the others refused." So "they called them, one after the other, behind the church building where they shot them dead."

On April 5, Islamic gunmen entered a Catholic church and murdered four Christians.
Sometime in February, Muslim terrorists abducted and murdered Antonio Cesar Fernandez, a 72-year-old Christian who had served as a missionary in Africa since 1982. Weeks earlier, Kirk Woodman, a Canadian was also kidnapped and later found murdered.
Although some attacks are not lethal, they exhibit no less an animosity for Christians. In early September, for example, an eyewitness explained what happened in the village of Hitté:
"16 men arrived in the village, intercepting the villagers who were returning from the fields. Some of the men forced the people to enter the church where they threatened the Christians and ordered them to leave their homes in the next three days, while others set fire to whatever they found in their path. Now Hitté no longer has any Christians and any catechumens."
Instead of killing them outright, the militants sometimes give Christians a chance to convert to Islam. One local source referred to it as "part of a program by the jihadists who are deliberately sowing terror, assassinating members of the Christian communities and forcing the remaining Christians to flee after warning them that they will return in three days' time — and that they do not wish to find any Christians or catechumens still there... The situation is critical."
The Islamic terrorists operating in Burkina Faso are similar to other African jihadi groups, such as Nigeria's Boko Haram and Somalia's Al Shabaab. Like them, when not terrorizing churches and slaughtering Christians, they target anything else that might be associated with the West. According to a May report:

Much of the Islamic anger in Burkina Faso has to do with the teaching of so-called Western thoughts and ideals. Besides churches, schools are also a favorite target of the militants, who are pushing to make the country an Islamic state and impose Sharia Law... Of 2,869 schools in Burkina Faso, 1,111 have been closed in the last three years as a direct result of Islamic extremist violence.
"A lot of schools have been torched," said one head teacher, whose school in the town of Foubẽ was set ablaze.
Like other African Islamic terror groups, the motivating ideology fueling the terrorists of Burkina Faso is distinctly jihadi in nature. After eight Muslims were arrested for their role in terrorist attacks that killed up to 28 people, for example, the prosecutor said, "they all carried on their foreheads or had white bands on which were written in Arabic ... 'there is no god but Allah and Muhammad is His Messenger.'" Also, when they opened fire on the French Embassy in Ouagadougou, the five assailants were heard to shout the jihadi war cry, "Allahu Akbar" ("Allah is greater").
Even if groups such as Islamic State have been defeated in Iraq and Syria, the jihad continues to spread in more obscure and forgotten nations around the world, such as Burkina Faso, where it consumes countless nameless and faceless innocents.
One can only hope that the response of the media and international community will be stronger than their usual one: ignoring the massacres. This slaughter has been already been characterized as a "genocide of Christians."
When, then, will the media and the so-called human rights groups finally confront — or at the very least condemn or even report on — these religiously-fueled massacres plaguing West Africa?
Originally published at Gatestone Institute - reposted with permission.