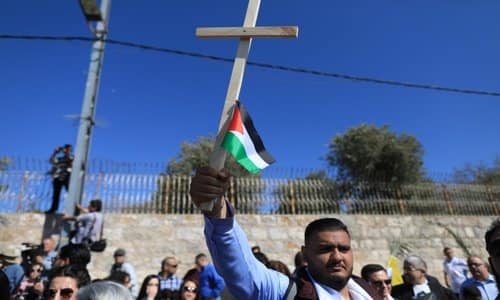 By Raymond Ibrahim/Gatestone Institute December 24, 2019
Share this article:
"The moment they [Hamas] took control [of the Gaza Strip], they started persecuting us, ruining our churches and forcing Christians to convert to Islam."
Such are the recollections, reported recently, of Kamal Tarazi, a 60-year-old Christian man from Gaza, now living in the streets of Nazareth. Before fleeing, he tried to resist the Islamist takeover, including by calling on Muslims and Christians to unite against Hamas. As a result, "I was jailed several times. Do you know what a Hamas prison is? It is pure torture."
The report adds that "the Islamic group decided to keep him alive to avoid depicting themselves as persecutors of the local Christian population, something that could potentially anger the international community." Tarazi was eventually released, fled the region, returned, got imprisoned again, and fled again, permanently. "I am sure there are no more than 500 Christians left in Gaza," he offers, "and it is just part of the general trend."

His account is a reminder that, while reports on the persecution of Christians emerge regularly from other Muslim majority regions around the world, little is mentioned of those Christians living under the rule of Hamas in Gaza and the Palestinian Authority in the West Bank.
This is not because they experience significantly less persecution than their coreligionists. Open Doors, a human rights group that follows the persecution of Christians, notes in its most recent report that Palestinian Christians suffer from a "high" level of persecution, the source of which is, in its words, "Islamic Oppression":
"Those who convert to Christianity from Islam, however, face the worst Christian persecution and it is difficult for them to safely participate in existing churches. In the West Bank they are threatened and put under great pressure, in Gaza their situation is so dangerous that they live their Christian faith in utmost secrecy... The influence of radical Islamic ideology is rising, and historical churches have to be diplomatic in their approach towards Muslims."
It seems that the unique situation of Palestinian Christians — living in a hotly contested arena with much political and media wrangling in the balance — best explains the lack of news from that area.
"The Persecution of Christians in the Palestinian Authority," a report by Dr. Edy Cohen, published by the Begin-Sadat Center for Strategic Studies earlier this year, goes a long way in validating this supposition.
First, it documents three anecdotes of persecution of Christians, all of which were back-to-back, and none of which was reported by the so-called "mainstream media." Summaries include:
April 25: "The terrified residents of the Christian village of Jifna near Ramallah ... were attacked by Muslim gunmen ... after a woman from the village submitted a complaint to the police that the son of a prominent, Fatah-affiliated leader had attacked her family. In response, dozens of Fatah gunmen came to the village, fired hundreds of bullets in the air, threw petrol bombs while shouting curses, and caused severe damage to public property. It was a miracle that there were no dead or wounded."

May 13: "Vandals broke into a church of the Maronite community in the center of Bethlehem, desecrated it, and stole expensive equipment belonging to the church, including the security cameras.... [T]his is the sixth time the Maronite church in Bethlehem has been subjected to acts of vandalism and theft, including an arson attack in 2015 that caused considerable damage and forced the church to close for a lengthy period."
May 16: "It was the turn of the Anglican church in the village of Aboud, west of Ramallah. Vandals cut through the fence, broke the windows of the church, and broke in. They desecrated it, looked for valuable items, and stole a great deal of equipment."
These three attacks, which occurred in the span of three weeks, fit the same pattern of abuse that Christians in other Muslim majority regions habitually experience. While the desecration and plundering of churches is prevalent, so too are Muslim mobs rising against Christian minorities, whenever the latter — perceived as dhimmis, or third-class, tolerated "citizens" who are often expected to be grateful they are tolerated at all — dare speak up for their rights, as occurred the Christian village of Jifna on April 25:
"The rioters called on the Christian residents to pay jizya—a head tax that was levied throughout history on non-Muslim minorities under Islamic rule. The most recent victims of the jizya were the Christian communities of Iraq and Syria under ISIS rule."
Moreover, as often happens when Muslims attack Christians in Islamic nations, "Despite the Christian residents' cries for help" in Jifna, "the PA police did not intervene during the hours of mayhem. They have not arrested any suspects." Similarly, "no suspects were arrested" in the two church attacks.
Palestinian Christians, in short, are suffering from the same patterns of persecution — including church attacks, kidnappings and forced conversion — as their co-religionists in dozens of Muslim nations. The difference, however, is that the persecution of Palestinian Christians has "received no coverage in the Palestinian media." In fact, Cohen explains, "a full gag order was imposed in many cases":
"The only thing that interests the PA is that events of this kind not be leaked to the media. Fatah regularly exerts heavy pressure on Christians not to report the acts of violence and vandalism from which they frequently suffer, as such publicity could damage the PA's image as an actor capable of protecting the lives and property of the Christian minority under its rule.
Even less does the PA want to be depicted as a radical entity that persecutes religious minorities. That image could have negative repercussions for the massive international, and particularly European, aid the PA receives."

Considered another way, the bread and butter of the Palestinian Authority and its supporters, particularly in the media, is to portray the Palestinians as victims of unjust aggression and discrimination from Israel. This narrative would be jeopardized if the international community learned that Palestinians are themselves persecuting fellow Palestinians — solely on account of religion.
It might be hard to muster sympathy for a supposedly oppressed people when one realizes that they themselves are doing the oppressing of the minorities in their midst, and for no other reason than religious bigotry.
Because they are so sensitive to this potential difficulty, "PA officials exert pressure on local Christian to not report such incidents, which threaten to unmask the Palestinian Authority as yet another Middle East regime beholden to a radical Islamic ideology," Cohen writes in another report.
"Far more important to the Palestinian Authority than arresting those who assault Christian sites is keeping such incidents out of the mainstream media. And they are very successful in this regard. Indeed, only a handful of smaller local outlets bothered to report on these latest break-ins. The mainstream international media ignored them altogether."
Notably, a similar dynamic sometimes exists concerning Muslim refugees. Although West European politicians and media present them as persecuted and oppressed, in need of a welcoming hand, some Muslim migrants themselves persecute and oppress Christian minorities among them — whether by terrorizing them in refugee camps, or drowning them in the Mediterranean.
Objective numbers confirm that Christians living under Hamas and the PA are experiencing some unpleasantry that Muslims are not: there were approximately 3,500 Christians in the Gaza Strip in 2007; now, there are now reportedly no more than 500-1,300.
As Justus Reid Weiner, a lawyer and scholar well-acquainted with the region, explains:
"The systematic persecution of Christian Arabs living in Palestinian areas is being met with nearly total silence by the international community, human rights activists, the media and NGOs... In a society where Arab Christians have no voice and no protection it is no surprise that they are leaving."
By all counts, Christianity is on the verge of disappearing in the place of its birth, including the scene of the Nativity -- Bethlehem.
Originally published at Gatestone Institute - reposted with permission.