Next Wave Of Policing - Predicting Crime Before It Happens 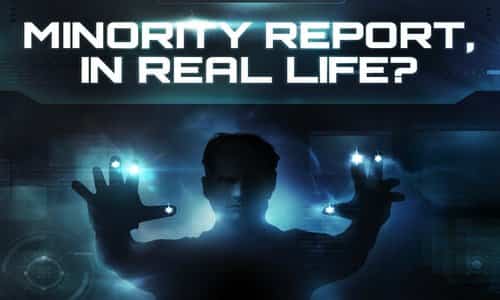 By PNW Staff May 31, 2016
Share this article:
If you have seen the movie, Minority Report, you took in a cinematic glimpse of a possible high-tech future in which crimes are predicted before they actually occur.

Modern day tech gurus, psychologists and security service providers are trying to make such a seemingly futuristic sci-fi capability into our modern day reality.
A team of scientists recently proved that a computer is better at predicting who will perform a violent act than human beings acting as judges. It is enough evidence to warrant extensive research into the technologies that could serve as vitally important pre-crime networks in the future.
The Benefits of Crime Prediction Technology
Cast aside any dystopian doubts you might have about a future society in which crime prevention technology is used and consider the technology's numerous merits for a moment.
Pre-crime technology has the potential to save countless lives. It would also prevent a considerable number of serious injuries. It even has the potential to prevent the unnecessary jailing of the least violent offenders. Yet a good portion of people are still uneasy about letting machines play any role in the fate of human beings.
We currently trust machines for tasks like automated marketing but are we really ready to trust them with even the slightest component of human justice? The truth is that our police forces already lean on such technology to predict where crimes are most likely to occur.
There is even a computer system in use in Fresno, California that predicts the likelihood of someone's potential to commit a crime. Known as Beware, this computer system assigns low, medium and high threat levels to individuals in an effort to gauge each person's danger to society.
Targeted Technology
Today's anti-crime high-tech devices crunch data on already known criminals and other wrongdoers. These systems are not gathering data on innocent, everyday citizens who are out running their errands or going to work.
The only publicly available data is that which is available through arrest records. Today's pre-crime technology is also used to pinpoint which parolees are the most likely to commit another crime. All computers need to create relatively accurate predictions is a pool of data.
It then finds patterns that serve as the foundation for predictions. When authorities relied upon a computer program to determine which half of domestic violence offenders should be released, only ten percent of those released were later arrested for the same crime.
It's a much better rate than that of human judges. About 20 percent of those selected for release by judges proceeded to commit the same crime again in the future. It is clear that computers have a role to play in law enforcement. The question is how much humanity is willing to trust these programs with issues of human justice.

China's Pre-Crime Network
The Chinese government is on the cutting edge of pre-crime technology. It created a 'pre-crime' network that will perform "predictive policing" of its citizen base in hopes of preventing another Tiananmen Square.
The network is expected to function by gathering extensive surveillance data and using artificial intelligence to pinpoint human identities based on facial features. Security camera footage along with an analysis of one's personal characteristics and social ties will help the government identify threats.
No one is fully sure as to when the Chinese government will roll out this groundbreaking pre-crime network but it will certainly be interesting to witness the results. It is anticipated that the government will roll out the technology in select areas where there are hotbeds of anti-government extremism.
The technology's data will add to the already existing Dang'an dossier that the government keeps on almost every citizen to record behaviors and attitudes.
Smart Policing is Here to Stay
There has been plenty of fuss over the new "smart policing" in the United Kingdom as well. These systems have been in development for a number of years.
They rely on data analytics in the context of historic offenses and other aspects of criminal behavior. The systems' end goal is to predict where crimes will happen.
As more laws are passed to allow authorities to access citizens' mental health records, the push for pre-crime technology will only continue to grow. But, there is a very fine line that separates crime prevention from the suppression of legitimate political dissent.