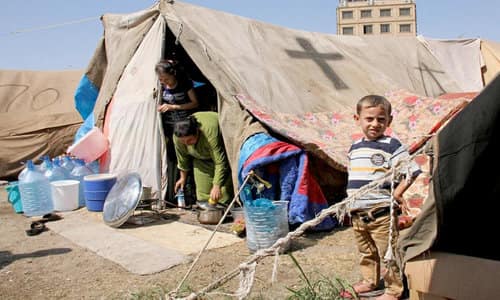 By Clarion Project December 27, 2019
Share this article:
Muslim UN officials are blocking Christian refugees from Syria -- especially those who have converted from Islam to Christianity -- from getting any help.
The moves includes blocking them from entering refugee camps and labeling them as security risks, a status which makes them ineligible for emigration to Western countries, including the U.S. and Britain.

In the course of a trial concerning a related issue in 2016, a federal judge chastised the Obama administration for allowing into the U.S. such a small number of Christian refugees from Syria.
While the Obama administration exceeded by almost 1,000 its goal of admitting 10,000 Syrians to the U.S. (during the 2016 fiscal year), only 56 were Christian.
"To date, there has not been a good explanation for this perplexing discrepancy," wrote Judge Daniel Manion at the time.
By 2017, after President Trump took office, he vowed to help the Christians, which make up 10 percent of the Syrian population. But moves from Jordanian officials working for the United Nations Refugee Agency (UNHCR) have thwarted that effort by labeling Christian refugees as security risks and refusing their entry into refugee camps.

According to a CBN report (see below), "The two governments that could stop this persecution of Christian refugees - the US and Britain - have done little to nothing about it."
One official in the UK is doing something about it. The former archbishop of Canterbury, Lord George Carey, is suing Britain's home office, contending that "politically correct" officials have been "institutionally biased" against Christian refugees.
Lord Carey's attorney, Paul Diamond, explained the case to CBN: "You have this absurd situation where the scheme is set up to help Syrian refugees and the people most in need, Christians who have been 'genocided,' they can't even get into the U.N. camps to get the food.

"If you enter and say I am a Christian or convert, the Muslim UN guards will block you from getting in and laugh at you and mock you and even threaten you."
Carey says by doing nothing, Western governments are complicit in what calls "the steady crucifixion of Middle East Christians."
"No simple measures are taken by both the British and the American government," Diamond said. "It would be simple just to open up a refugee camp for religious minorities, for Christians, Yazidis, whatever they are, and they'd be safe. But no one does that."
Meanwhile, as the report notes, Britain's Home office is spending considerable time and money on bringing back to the UK the children of ISIS terrorists.
Originally published at Clarion Project - reposted with permission.