LGBT Activists Are Backing Military Chaplains Into A Corner 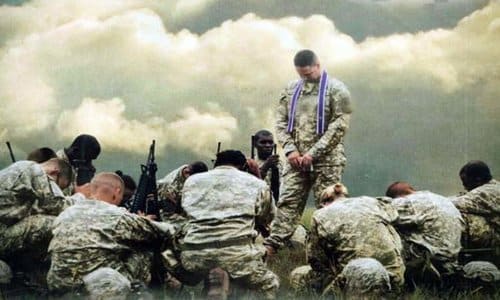 By Jonathon Van Maren/Bridgehead.ca December 30, 2019
Share this article:
One of America's key chroniclers of how the history of the United States has been shaped by the Christian faith is Stephen Mansfield, the author and co-author of over eighteen books, most recently Choosing Donald Trump: God, Anger, Hope, and Why Christian Conservatives Supported Him.
His books The Faith of George W. Bush and Lincoln's Battle with God have long been favorites of mine, but it was not until a couple of years ago that I stumbled across his 2005 book The Faith of the American Soldier, which details Mansfield's research into the beliefs of military men and women on the frontlines--including his time embedded with the soldiers themselves during the War in Iraq.
The faith (or lack thereof) of those serving in America's wars has often been a subject ignored by the media, largely because the vast majority of journalists are secular and thus religious topics often do not even occur to them.
Additionally, the growing tension between the vocations of military chaplains and the forces of LGBT activism has only grown since the book's publication, and as Mansfield told me during our interview, there is no readily available solution to the ongoing social experiment currently underway in the American military. His book and his insights into these topics are much-needed, and I enjoyed our conversation immensely.

What gave you the idea to write this book, The Faith of the American Soldier?
Well, just prior to that I'd written a book called The Faith of George W. Bush and I'd been real involved in the presidential election in 2004. I had a bit of a platform and I was grateful for that, and at the time publishers were beginning to ask me what I'd like to write next. We were getting a lot of stories about religious movements among the American soldiers in Iraq.
I was intrigued by that. I had been studying millennials and religion for quite some time, but I hadn't spent much time paying attention to soldiers, millennial soldiers and what was going on with them in the battlefield. I got permission from the Pentagon to be embedded with US troops in Iraq and I went over there and did the research for the book. Essentially it was that the millennials were taking their non-traditional approach to religion onto the battlefield and commanders were wrestling with what that meant exactly and I wanted to get ahead of that story and tell the story and perhaps do some good with it.
In the book you first detail the long religious tradition of the American military. What was it like to tell that story?
It is a fascinating story. There's no question that when soldiers are on the battlefield, almost all of them are making some kind of deeper religious journey. It may not be a traditional religious journey, it may not be a Christian religious journey, but they're all making some kind of deeper religious journey.
In earlier times in American history, that was mostly Christian. Christian chaplains were involved, Bible services shaped entire wars. We now know that the American Civil War, for example, was dramatically impacted by massive religious revivals that occurred among the Southern troops. So it's a fascinating story, and one that only specialists tend to know.
And then you have to deal with that history up against our First Amendment history. Our Constitution requires the separation of the institutional church and state but not so much religion and state. Religion was meant to be of influence, but our Founding Fathers did not want the church and the church leadership to dominate the society. So this becomes an issue when you're talking about chaplains, paid by the US government.
All of it became really interesting. And then I realized that many people in Washington--my wife and I split our time between Washington and Nashville--many people didn't know anything about these issues, they didn't know anything about the challenges chaplains were dealing with, they didn't know about the religious surge going on amongst the troops. I thought if I could write a book that told this history and then brought it to the contemporary scene that perhaps I could advise these people a little bit and perhaps we could have some wiser policies regarding these things.

What are some of the stories you discovered about the American military chaplains?
It's pretty amazing. These people, in my view, are heroes, whatever faith they're from. These are people who go into battle unarmed. In some branches of the military they don't allow chaplains to cross the wire and actually go into harm's way, but Marine chaplains and Navy chaplains, they actually go into battle with these Marine units.
So there they are, unarmed, ministering to these soldiers as they are shot, as they die, before they go out, encouraging them. It's pretty stunning. Many of them are incredibly heroic--not only in terms of the fact that they're in harm's way and facing their own death, but they've been known to rescue civilians, they've been known to run out on the battle field and pull a wounded man out of the line of fire. It's pretty amazing what they have accomplished.
It's a grand tradition, chaplains in the military, as we see in Times Square in New York. There's a statue of an Irish chaplain who ministered to World War I soldiers in a unit from New York. There's a number of those kinds of statues around the US celebrating great chaplains. That grand tradition is being continued even though the average American doesn't know about it.
A lot of people will be unaware of the story you tell in The Faith of the American Soldier. What are some of the stories you encountered while you were embedded with the military in Iraq?
The soldiers who went to war for the US in Iraq were interestingly a little bit older and better educated than many soldiers had been in previous wars. This is because this is an all-volunteer army, and most of them were engaged from university or college. And yet they took their non-traditional faith approach onto the battlefield. So when I got there and I was embedded in Iraq, one of the stories that was circulating that was an encouragement to a lot of the soldiers was the story of Sergeant C.
This had actually been told in the Army Times; it was very well known and very well documented. Sergeant C went out on Christmas Day 2005 to unearth a nest of insurgents, which he'd been ordered to take his unit to unearth. He rounded a corner during this operation and an Iraqi officer was standing there with a .45 caliber pointed right in his face. Anyone who knows anything about weaponry knows that this should have been instant death when the officer pulled the trigger--a .45 will almost take a man's head off.
The Iraqi officer fired, the gun sounded, and Sergeant C was still standing. So Sergeant C advanced on the Iraqi officer, who was just stunned, took him back to the POW area, and as he was going back in the Humvee to base, his fellow soldiers said, "You've got some blood coming out of your mouth. You probably need to go to the clinic and have the check you." So he went back, and here's what happened. This is actually very well-documented. He assumed, of course, that the Iraqi officer's gun had misfired. It had not misfired.
It had actually fired a bullet into Sergeant C, but what happened was the bullet went through his upper lip, and he had a very thick mustache which is why nobody knew the bullet had penetrated his upper lip, and it turned, and it displaced a tooth. The bullet was sitting right there in the gap where the displaced tooth had been in previously. So you have to picture an X-ray of a man with a grin, but one of his teeth is actually a bullet.
So they took him back to the medical area, the examining doctor said we've got to send you to the dental area, they padded the room with ballistic material, and they pulled the bullet the same way they would have pulled a tooth. This was such a miracle--of course, Sergeant C was just ticked off that they had to shave his mustache--and these X-rays were circulated in the Army Times, that soldiers were cutting this article out from the Army Times, folding it up, putting it in their pants' pockets.
They were carrying it almost like a votive thing: God, if you're doing this kind of thing, do it for me. That's how faith often works. Something that had been seemingly miraculous, something that had inspired people, something that had turned people's thoughts to God; they carried with them, they held in their hands, they put in their pockets, they used it--it was more than a good luck charm, they wanted it to turn their thoughts to God. That was perhaps the most powerful thing circulating at the time that I showed up over there to be embedded.