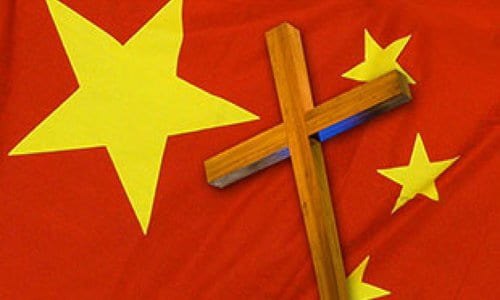 By Michael Snyder /End Of The American Dream January 07, 2020
Share this article:
Approximately one out of every seven people on the entire planet lives in China, and it has become one of the most dystopian societies that the world has ever seen.
Surveillance cameras, government spies and facial recognition scanners are everywhere, and the totalitarian "social credit score" system that is currently being rolled out is an absolute nightmare.  And the Chinese government is not content to simply control how people behave.
They also want to literally control what people believe, and the ongoing crackdown on the Christian faith has been absolutely brutal.  Over the past several years, scores of pastors have been arrested, countless underground churches have been shut down, and thousands of Bibles have been burned.
Unfortunately, that wasn't enough for Chinese officials, and so they have now taken things to an entirely new level.

When the communists first came to power in China, it was a very dark time for Christians.  But underground churches started blossoming even in the midst of the persecution, and eventually there were a few decades where the national government more or less tolerated unsanctioned gatherings.
Today, it has been estimated that there are more than 100 million Christians in China, and it is being projected that China may actually have more Christians that any other nation on the planet by the year 2030.
Needless to say, the communists don't like any threats to their power, and they see this underground movement as a very serious threat.
Under the leadership of Chinese President Xi Jinping, the persecution of unofficial churches has steadily escalated.  This year they actually tried to ban Christians from gathering on Christmas, and a series of new regulations has just been introduced that requires "total submission to the Chinese Communist Party at all times"...
A new mandate entitled "Administrative Measures for Religious Groups" has been approved by the CPC and is comprised of six chapters and 41 articles dealing with the organization, functions, offices, supervision, projects and economic administration of religious communities.

The new rules also seek to ensure that religious leaders support, promote and implement total submission to the Chinese Communist Party at all times.
So what does that sort of "submission" look like?
Well, in some cases officials have required churches to take down pictures of Jesus and replace them with pictures of President Xi Jinping.
Yes, this is how twisted things have become in China.
The new regulations also require all churches to "spread the principles and policies of the Chinese Communist Party" in all of their activities...
According to International Christian Concern, Article 5 of the new ordinance reads that "religious organizations must adhere to the leadership of the Chinese Communist Party, observe the constitution, laws, regulations, ordinances and policies, adhere to the principle of independence and self-government, adhere to the directives on religions in China, implementing the values ​​of socialism ..."
In addition, Article 17 specifies that all religious organizations "must spread the principles and policies of the Chinese Communist Party" in everything they do.
Any church that does not go along is likely to be raided and shut down at any time.
For example, Pastor Wang Yi once led one of the most important underground churches in all of China, but his church was raided and he was arrested.
And now we have learned that he has just been sentenced to nine years in prison...
Wang Yi, a leader in one of the most well-known Christian congregations in China, has been quietly sentenced to nine years in prison, according to a statement on the website of the Intermediate People's Court of Chengdu Municipality.

The sentencing is the latest incident in an ongoing crackdown on organized religion in China. Early Rain Covenant Church, which Wang founded in 2008, attracted about 500 followers and was considered one of the most influential "underground churches" in China, operating independently of the state.
According to Chinese officials, Pastor Yi received such a harsh sentence for "subverting state power".
Of course it isn't just pastors that are being arrested.  Countless numbers of ordinary Chinese citizens have been swept up during the raids, and many are never seen or heard from again.
One Chinese Christian woman told the Los Angeles Times what happened to her when she was interrogated...
Li Chengju glared at her prison interrogator as he pressed her to renounce her Christian church and condemn her pastor.
Her captor warned she would not be so lucky as the pastor, who was locked in secret detention but at least might get a day in court.
"Look at you. You sweep the floors at church," the interrogator said. "You think you're getting a trial like your pastor? You don't qualify."
The way that the Chinese are treating their citizens is absolutely reprehensible, and unless they completely change course we should not be conducting any trade with them at all.
Sadly, the "five-year plan" that was launched in 2018 to indoctrinate churches all over China is not even halfway done...
The government calls its campaign "Sinicization" -- a euphemism for turning faith into a tool for indoctrination in Chinese Communist Party ideology. The official five-year plan, issued in 2018, calls for inserting "patriotic education" and "socialist core values" into churches, revising the Bible and using church sermons to enforce party leadership and reject foreign influences.
The persecution of Christians is likely to get even worse in China, and this comes at a time when Christian persecution is on the rise all over the world.  This is something that many of us have been anticipating because of the times in which we live, but it is still horrifying to actually watch it happen.
As I close this article, I would like to share a message from Pastor Wang Yi that was posted on Facebook after he was arrested.  May his words inspire all of us to live every moment and to be the people that we were created to be...
"I hope God uses me, by means of first losing my personal freedom, to tell those who have deprived me of my personal freedom that there is an authority higher than their authority, and that there is a freedom that they cannot restrain, a freedom that fills the church of the crucified and risen Jesus Christ."
"Regardless of what crime the government charges me with, whatever filth they fling at me, as long as this charge is related to my faith, my writings, my comments, and my teachings, it is merely a lie and temptation of demons. I categorically deny it. I will serve my sentence, but I will not serve the law. I will be executed, but I will not plead guilty."
"Those who lock me up will one day be locked up by angels. Those who interrogate me will finally be questioned and judged by Christ. When I think of this, the Lord fills me with a natural compassion and grief toward those who are attempting to and actively imprisoning me. Pray that the Lord would use me, that he would grant me patience and wisdom, that I might take the gospel to them."
"Separate me from my wife and children, ruin my reputation, destroy my life and my family - the authorities are capable of doing all of these things. However, no one in this world can force me to renounce my faith; no one can make me change my life; and no one can raise me from the dead."
"Jesus is the Christ, son of the eternal, living God. He died for sinners and rose to life for us. He is my king and the king of the whole earth yesterday, today, and forever. I am his servant, and I am imprisoned because of this. I will resist in meekness those who resist God, and I will joyfully violate all laws that violate God's laws."
- Pastor Wang Yi, "My Declaration of Faithful Disobedience"
Originally published at End Of The American Dream - reposted with permission.